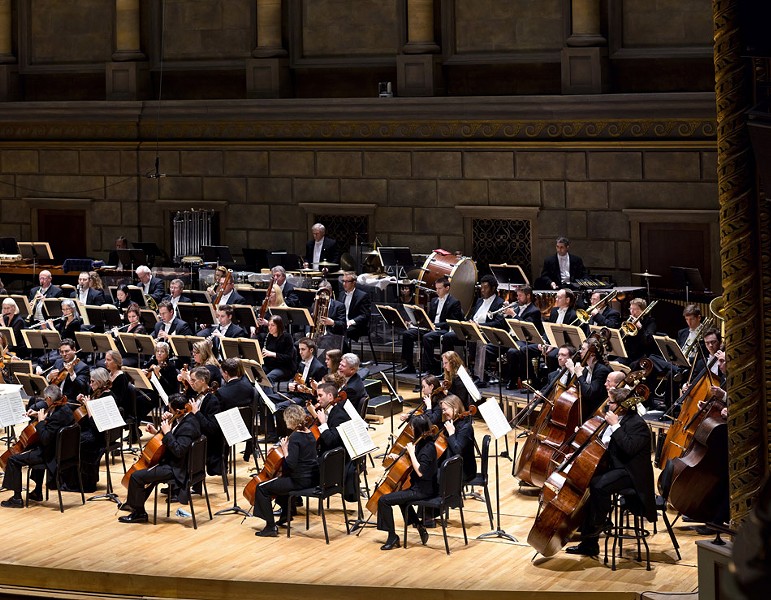 Based on most local media coverage of Ward Stare, the Rochester Philharmonic Orchestra's new music director, you would know that he's young, he's handsome, and he looks good in a tuxedo -- all excellent attributes in a conductor, of course, but ...

The media have approached Stare's musical credentials more gingerly; nonetheless they are definitely there, and based on last night's RPO season opener, the orchestra's confidence in him is understandable.

Stare and the orchestra, and guest violinist Midori, presented a standard overture-concerto-symphony program. All three from the 19th-century and, in the case of Brahms's Violin Concerto and Tchaikovsky's Fourth Symphony, even from (more or less) the same year: 1878. But if the program was standard, the performances were fresh and distinctive. Brahms and Tchaikovsky didn't have much to say about each other that I know of, and I can't imagine they cared for each other's music, but putting these composers together on a program -- and these pieces in particular -- made for an intriguing contrast.

Midori was an unusually modest, almost retiring soloist in the Brahms concerto. Her tone was pleasingly refined and delicate and her manner shy, rather unusual for a romantic-era concerto which is often played in a "beefy" manner. In the first movement of this concerto, the orchestra proposes, and the soloist disperses: again and again the orchestra works up a good head of steam, and then the soloist wanders off in ruminative passages that wind over and around the background.

Midori's unusually modest demeanor, standing close to the orchestral violins and often seeming to commune with her instrument, brought this element of the music into sharper relief than usual, and I found it fascinating. Midori has the musical intelligence to realize that often in this concerto, she is not leading the orchestra but accompanying it. (The 19th-century violinist Pablo de Sarasate refused to play the Brahms concerto because he thought the oboe had the only good melody in it.) The concerto is certainly virtuosic, but its template is closer to a kind of mega-chamber music. Midori often seemed hardly like a star soloist at all, and in this work that's a compliment.

Stare and the orchestra played with generally broad tempos and attention to expressive details, giving the music a burnished, romantic sound (the long passage for winds at the beginning of the slow movement was exquisitely done -- including that famous oboe solo, sensitively played by Erik Behr). This performance of the Brahms concerto was anything but the flashy event one might expect for a season-opening concert, but it suited the thoughtful work to a T.

If Brahms ever heard Tchaikovsky's Fourth Symphony, he surely shuddered at its rampant emotionality and uninhibited orchestral sound. Of course, those very things made this work continuously popular with concert audiences (and with conductors). Given a good performance, it always comes off, and it came off handsomely on Thursday night -- not just well played (in some cases fantastically played) by the orchestra, but well thought-out by the conductor. The symphony's huge first movement is unconventionally structured and can ramble -- Stare kept the episodes in proportion and the movement built very convincingly to its huge climax. The ballet-like middle movements were all nostalgia and charm, and the finale irresistibly exciting: headlong and solid as a rock at the same time.

As for the orchestra, it seemed to be giving 100 percent in all departments. The solo wind work was beautiful; Behr had another luscious slow-movement solo, as did clarinetist Kenneth Grant and hornist Peter Kurau in the first movement. The brass section was powerful but not blaring (a danger in this piece, which is permeated by a baleful fanfare symbolizing fate), and the strings played all their unison melodies and rushing scales with thrilling unanimity.

The concert started with the overture to "Beatrice and Benedict," Berlioz's comic opera based on Shakespeare's "Much Ado about Nothing." The composer described his work as "a caprice written in needlepoint," and his music, like the play, alternates capriciousness and romance very effectively. In this robust performance, both won out -- and in this opening concert, so did Stare and the RPO.