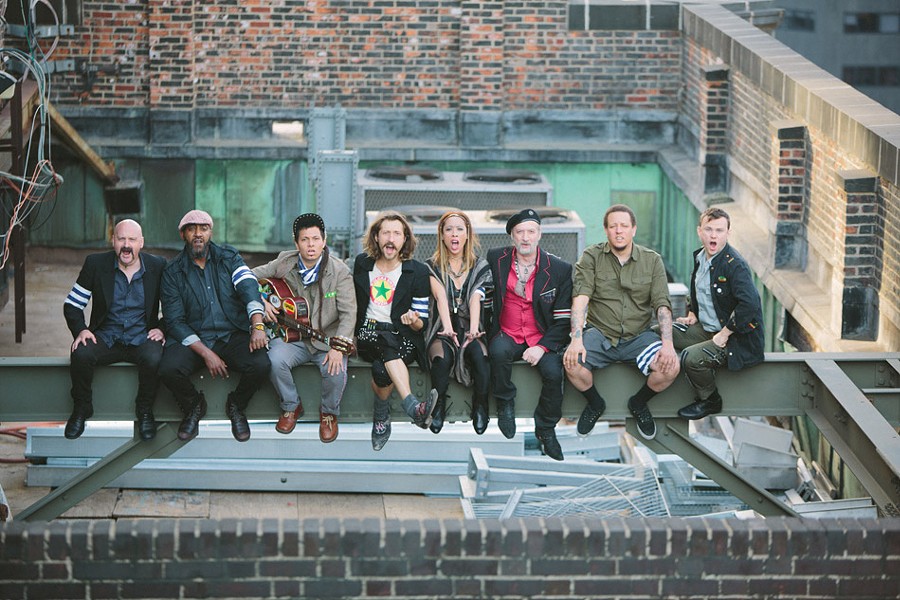 Ukraine-born front man Eugene Hütz and his multicultural crew played to a crowded Main Street Armory, Saturday night, when Gogol Bordello made its Rochester debut — and the Gypsy punk band proved why it is one of the most celebrated concert experiences in all the land.

Opening act Man Man started the festivities. Lead singer-pianist Honus Honus resembled the ghost of Lester Bangs as he stood on a pedestal with a sparkling hooded cape and tie-died pants for the sinister-sounding opening number, "End Boss." But once he got down to business on the piano, that's when things started to get weird. The quartet's sound was cosmic, trippy, catchy, and experimental at times — imagine a strange combination of zombies, Tom Waits, a drummer named Pow Pow, and lots of magic mushrooms. Man Man's set ended when the last chord played was one banged out by Honus Honus' butt.

Gogol Bordello's anticipated set began inconspicuously when lead singer-guitarist Eugene Hutz walked onto the stage, took a sip from a wine bottle, and asked the audience "What's up, Rochester?" Hutz launched into "Illumination" a tune that picked up steam once the rest of his bandmates filed out and joined in.

Gogol Bordello's second song, "Ultimate," established the mood for the rest of the evening. It was sweaty, charged up, and pretty much mind blowing as the band took instruments that you would expect at a Russian wedding and made it all sound transformational.

The glue that held Gogol Bordello together was Hutz's acoustic guitar. Likewise, Hutz was the sinewy pied piper of an outfit that whipped the crowd into frenzy and brought it back down.

When the group blended elements of Latin music, the audience responded by going bananas during numbers including "Immigraniada."

Of course, there was never a dull moment on the floor when a dose of Gypsy punk was added to an already break-neck mix of musical genres. Among the highlights of the show was, of course, "Start Wearing Purple," a simple tune fueled by embellishments from violinist Sergey Ryabtsev that caused nearly everyone in the packed room to sing along and jump around.

More importantly, there were smiles on people's faces.