When singer and conductor Anna Atwater first sang with Concentus Women's Chorus in a 2016 concert, she started at the top — singing in Benjamin Britten's "Ceremony of Carols,"  one of the pinnacles of the repertoire for women's voices.

"It was spectacular," Atwater says. She immediately joined Concentus. Three years later, Atwater is the choir's first new music director since its founding. The ensemble, currently with nineteen members, is devoted to exploring the wide variety of classical music — ranging from medieval chant through contemporary compositions — written specifically for women's voices.

You might think that music written only for soprano and alto voices might have a limited range, both musically and in terms of scope. In reality, Concentus' repertoire spans centuries, from Hildegard of Bingen and Guillaume Dufay to Brahms, Verdi, and Holst. And as you can tell from any Concentus program, new music is being written for women's chorus all the time. "My music binders are full of an impressive amount of repertoire for women' voices and dozens of concert programs," Concentus Conductor Emerita Gwendolyn Hall Gassler says. 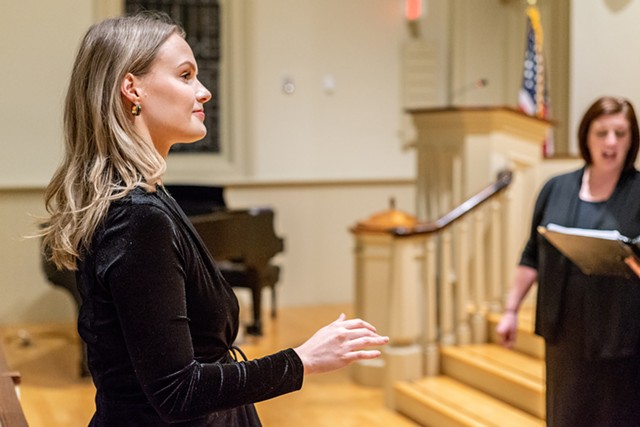 Concentus is coming up on its 20th anniversary. The ensemble was founded in 2000 by Gassler and fellow conductor Edna Yeh, who went on to found California's Pacific Women's Chorus. Gassler, an Eastman graduate, also served as the assistant conductor of the Rochester Oratorio Society for 20 years. She recently stepped down from the podium at Concentus and was succeeded by Atwater.

"This past June," Gassler says, "I made the decision to pass the proverbial baton to the next generation. The decision was not made lightly, but I have been itching to be involved as a singer — exploring early music as well as challenging 21st-century compositions — and needed to put more time into that and a few other endeavors.

"Gwen means a lot to me," Atwater says. "I consider her a mentor and friend. We are now sharing our appreciation of early music by singing in the Scivias medieval ensemble."

Atwater is well-qualified for the Concentus music director's gig. A former trumpet player, she has a bachelor's degree in music education and a master's in vocal performance. She teaches vocal music at Albion Central School, and in addition to conducting and singing with Concentus, she is a member of the Eastman-Rochester ensemble Voices. A member of Concentus since September 2016, Atwater first conducted the ensemble in December 2018 and June 2019, before beginning her tenure as music director in September.

In addition to its own full-length concert presentations each year, Concentus has performed with the Penfield Symphony Orchestra and Rochester Philharmonic Orchestras, and appears every other year in the Greater Rochester Choral Consortium's "Taste of Song" concert at Eastman Theatre's Kodak Hall. 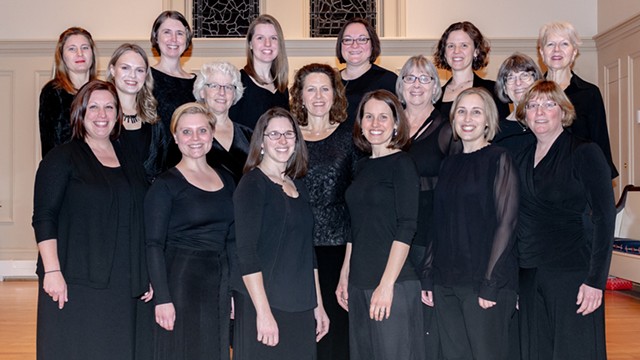 According to Atwater, Concentus is thriving, and its longevity is not just due to its musical quality. "Concentus has an incredibly supportive atmosphere," she says. "When I joined the group, I immediately felt a sense of belonging, respect, and warmth. Many members have been a part of this ensemble for a significant period. As a smaller group, under 20 members, we share in the incredibly bonding experience of music-making."

Next Wednesday, Concentus takes to the airwaves on WXXI-FM's "Backstage Pass," performing past favorites and classic holiday music, including an arrangement of "Sing We Now of Christmas" by local composer Cary Ratcliff, who has written several works in Concentus's repertoire. Hosted by WXXI's Classical 91.5 host Julia Figueras, the "Backstage Pass" show also serves to preview a few pieces from Concentus' January concert "Moon, Stars, and Northern Lights," which will include two notable contemporary compositions — Ola Gjeilo's "Northern Lights" and "Stars, Blue, Ice" by Stephen Chatman.

These concert appearances point the way to an exciting 20th anniversary season for Concentus, including a newly commissioned piece by Caroline Mallonee. "We were fortunate to be the recipients of The Greater Rochester Choral Consortium's 2019 Artistic Project Grant," Atwater says, "and now have an incredible piece by Carrie that we will be premiering in June."

David Raymond is a freelance writer for CITY. Feedback on this article can be directed to dkushner@rochester-citynews.com.