Composting is growing, but we’re a long way from getting with the program

An earthy, musty smell hangs in the air of Impact Earth’s cavernous headquarters on Brighton-Henrietta Town Line Road, where crews are emptying buckets of vegetable peels, apple cores, coffee grounds, egg shells, and other food scraps into totes destined for small farms for composting into a top soil-like material.

Roughly 20 tons of food scraps pass through the facility each week, according to the company, organic waste collected from residential customers and commercial clients, such as restaurants and institutional kitchens, that would otherwise sit in a landfill.

“Everyone has food waste to varying degrees and rather than throw it in the trash bucket and have that go to the landfill, which we know is a bad thing, diverting it and having it turned into soil or energy is a much better alternative,” said Robert Putney, the co-founder and chief executive officer of Impact Earth.

Impact Earth became Monroe County’s only residential food waste composting service in January after it acquired its competitor, Community Composting, for an undisclosed price. But the merger is more significant than a couple of companies consolidating. It is the latest sign that there is growing interest in and demand for composting in the Rochester region.

That shouldn’t come as a surprise. Across the country over the past five years, the number of communities offering some form of composting has grown by 65 percent, according to a 2019 report from the U.S. Public Interest Research Group.

Still, Rochester and Monroe County towns and villages are somewhat advanced when it comes to composting in America in that residents can subscribe to a curbside food scraps pickup service. The U.S. PIRG study noted that such programs are available in less than 2 percent of the 19,000 towns and cities across the country.

At the same time, Rochester and Monroe County lag their peers in New York in terms of public composting programs. The city of Buffalo and Onondaga County, for instance, launched municipally-funded initiatives years ago.

The growing interest in food waste recycling, a term often used for the collection and composting of food scraps, emerges as governments and the public at large have become increasingly aware of the problems posed by burying food scraps in landfills. 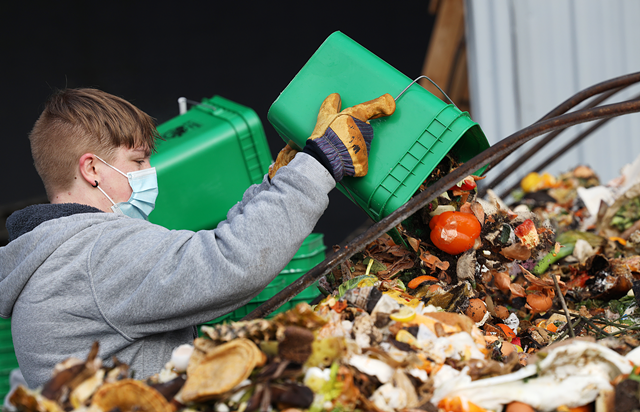 In the United States alone, food waste generates the same amount of greenhouse gas emissions as 37 million cars, roughly 1 in 7 cars on the road, according to the Natural Resources Defense Council. That accounts for both the energy to grow unused food, as well as the methane that is released by food rotting in landfills.

The problem will only worsen, as studies project the global population will need potentially twice as much food by 2050 as it did in 2005.

“Food waste is actually a very high percentage of what goes into the municipal waste stream,” said Charles Ruffing, director of the New York Pollution Prevention Institute, which is based at Rochester Institute of Technology.

Community Composting was a relatively young company, having been started by Rochester residents Brent Arnold and Steven Kraft in 2013. Since its founding, Arnold figured, the company has kept some 1,500 tons of food waste out of landfills — an amount equivalent to 937 Toyota Priuses.

But Arnold noted its customer base grew by about 30-percent annually and was still rising at the time of the sale — a rate too rapid for the company to keep pace.

As Putney put it: “There was more demand for curbside than what the company was doing.”

Impact Earth, which is located in Brighton near Monroe Community College and the Henrietta border, is an equally young company. It started in 2014 with a focus on helping event organizers cut down on the amount of trash they were sending to landfills. As the company grew, it started collecting and composting food scraps from commercial clients.

Two years ago, it expanded into residential service and began accepting food scraps for a fee of $5 per bucket. Customers were able to drop off full five-gallon buckets, and pick up clean, empty ones, at the Rochester Public Market and area farmers markets.

When the COVID-19 pandemic hit, the company pivoted to a curbside pickup model, Putney said. By October, the company had 500 curbside customers, many of whom previously used the drop-off service.

The acquisition boosted Impact Earth’s collection capacity, but company officials say the higher volume translates to more efficient and less expensive collection and compositing that could ultimately drive down costs to customers.

“There’s just an economy in combining the two groups together, which was also a driver for us,” Putney said. 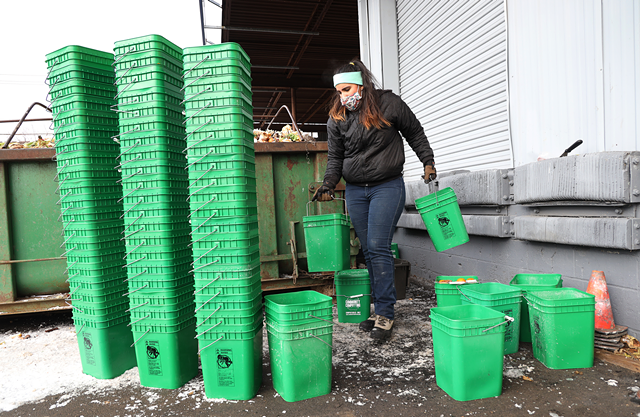 Food waste is a major problem in the United States. The U.S. Environmental Protection Agency has estimated that food waste accounts for roughly a quarter of the trash sent to the country’s landfills.

That figure doesn’t include the large amounts of food scraps that county residents run through their garbage disposals and into the sewers, noted Mike Garland, the county’s Department of Environmental Services commissioner.

Ideally, food shouldn’t be wasted at all, but when it can’t be avoided, diverting it away from landfills and sewers is the next best option.

When food waste is entombed with trash, it not only takes up finite space in landfills, but shortens the lifespan of landfills. As food waste breaks down underneath thousands of tons of garbage, it emits offensive odors and generates substantial amounts of methane, a potent climate-disrupting greenhouse gas.

Composting food scraps turns them into nutrient-rich, soil-like humus — a valuable commodity to gardeners and farmers. Impact Earth gives some of its compost to customers free of charge and sells the rest.

Local governments, including Rochester, have started looking at food waste recycling programs to help cut their communities’ carbon emissions and save money. The U.S. PIRG report noted that, in 2017, the average price to dump waste at a landfill was $52 a ton, but the average price for dumping organic waste at a composting facility was $35 a ton.

The city of Rochester, which does its own refuse and recycling collection, in 2019 began studying the feasibility of a municipal food waste recycling program as a way to save money and the environment. The city is expected to launch a pilot program in the near future.

But the county will explore its own food waste reduction efforts, including food scraps composting, as it develops a climate action plan, Garland said. The first phase of work on the plan will start this year, although handling food waste is expected to begin in 2022.

The city and county’s peers to the west and east already have public food scrap composting programs.

Buffalo started its Scrap It! initiative in 2018 and added six food scraps drop-off locations the following year. Between May and September of 2019, the city composted 8,638 pounds — over four tons — of food waste, according to Buffalo’s annual recycling report.

By contrast, neither Rochester nor Monroe County have any such public program. Their only options are composting in their own yards, which isn’t an option for everyone, or subscribing to the service offered by Impact Earth.

Community food waste recycling programs are in their infancy and they take different forms in different places, Ruffing said. Some are run entirely by for-profit companies, while others are operated by local governments. Sometimes they are the product of public-private partnerships.

Ruffing believes that the public-private arrangement may prove to be the best model for expanding and promoting food waste composting efforts.

“The private sector is better positioned to run the routes, do the pickups — depending on the location, even operate the composting facility,” Ruffing said. “But generally it takes a municipality scale to do the communication, the encouragement, in some cases the regulation.”

Putney also sees the public-private model as key to the future growth of Impact Earth’s residential composting business, especially if local governments set up programs where residents can opt in and pay for the service through their tax bills. Those programs would help Impact Earth to break into the mainstream and reach Putney’s next target: 10,000 customers.

“A collaborative approach is always best,” Putney said. “We collaboratively collect trash now so it wouldn’t be any different.”

The company already has contracts with the towns of Victor and Canandaigua to administer their food scrap drop-off programs. It has also served as a consultant on Rochester’s food waste recycling feasibility study.

For now, it’s not clear what an expansion of food waste recycling services in Rochester would look like. Residents could see ramped-up curbside pickup, more municipal food scrap drop-off sites, or even the development of neighborhood food waste drop-of hubs.

Putney said there’s merit to having both curbside and drop-off options available to residents. He noted that even after Impact Earth began offering curbside pickup, many customers opted to continue dropping off their scraps at farmer’s markets, which they want to support. As a business, the best way to attract and keep customers is to provide a service that works for them, he added.

“I think the best way to encourage people to compost, whether it’s residentially or commercially, is to give them options,” Putney said.

This article has been corrected to clarify the amount of food waste composted at Onondaga County Resource Recovery Agency facilities.