Debbie Inzana thought she just had a chest infection when she went to the doctor in 2012. It turned out to be breast cancer.

"There were two lumps," says Inzana, who is now 43. "Stage two — almost stage three — breast cancer. And it had already spread to my lymph nodes."

Inzana opted to have a single mastectomy and her left breast was removed. Doctors could reconstruct a reasonable facsimile of a breast with tissue harvested from her abdomen, but due to the procedure's invasiveness, they couldn't reconstruct her nipple. So Inzana went to see tattoo artist, TeeJay Dill. Soon after, she was sitting in Dill's shop getting a new nipple tattooed on her reconstructed breast. The whole affair was an eye opener.

Dill is a remarkable tattoo artist whose mastery of the craft is immediately recognizable with its gentle, fine line subtlety and dynamic color blend. She owns and operates White Tiger Tattoo which has locations in Greece and Webster. Any time you walk in, the joints are jumping with a constant bizz-buzz of tattoo machines and colorful people.

Getting a tattoo can be a deeply personal decision. It's the veritable heart on the sleeve, a commemoration, a mantra of ink and blood in the skin. But in the case of Dill's work, tattooing not only takes on inking the skin, it's replacing what has been lost physically and emotionally.

Dill tattoos nipples on cancer survivors who have lost them in the process of a mastectomy. Known as "tittooing" or "areola re-pigmenting," Dill painstakingly blends multiple shades of ink — 19 to be exact — determines placement and size, and makes it permanent on a scarred, reconstructed breast. In the case of 3D tattooing, Dill masterfully shades the tattoo to look so much like a life-like, erect nipple, that babies can't even tell the difference.

Dill got her start in nipple tattooing in the early 1990's after a friend, who had nipple tattoos done in California, came into the shop for a touch-up. Dill demurred at first.

"I had no idea what I was doing," Dill says. "I'd never done anything like that before and it didn't seem like something I wanted to experiment on." Fortunately she was swayed.

Up until recently, Dill was working out of two doctor's offices at Strong Memorial Hospital, which was required if the procedure was to be covered by insurance.

At the time, Strong was the first hospital in the country "that the hospital board and the insurance agencies all knew they were paying an outside tattooer," she says. "Prior to that, the doctor would bill it and then help pay the tattooer and kind of shuffle it around."

In order to run her two busy business locations, Dill no longer works out of doctor's offices and now offers nipple tattooing at her shops only, where unfortunately, insurance doesn't offer coverage. Cost runs from $200-$300 with a lifetime warranty for touch-ups and color adjustments. The actual tattooing takes about half an hour; the majority of the appointment is spent discussing the procedure and making color and placement decisions.

Tattooing may still hover on the medical and social fringes, but according to Dill, through medical tattooing on burn survivors, people with vitiligo, and nipple replacement tattooing, it has begun to reach a broader demographic.

"I think tattooing has come a long way," she says. "And it's more accepted as an art form. I've definitely wound up tattooing people who would never have been tattooed otherwise and I think it becomes another aspect of tattooing that people are aware of."

And its acceptance is growing, even among some surgeons who, according to Dill, didn't originally deem the cosmetic aspect important when facing breast cancer. They weren't treating the whole patient.

"I think now they are taking more time with them cosmetically," she says. "Since I've been doing this, the aesthetic differences are tremendous. When I started doing this in '99, the mentality of most doctors was, 'You're lucky to be alive. Period. You're lucky we gave you a breast at all. And as long as it looks good in a bra when you're dressed, that's all that matters.' That's definitely changed." 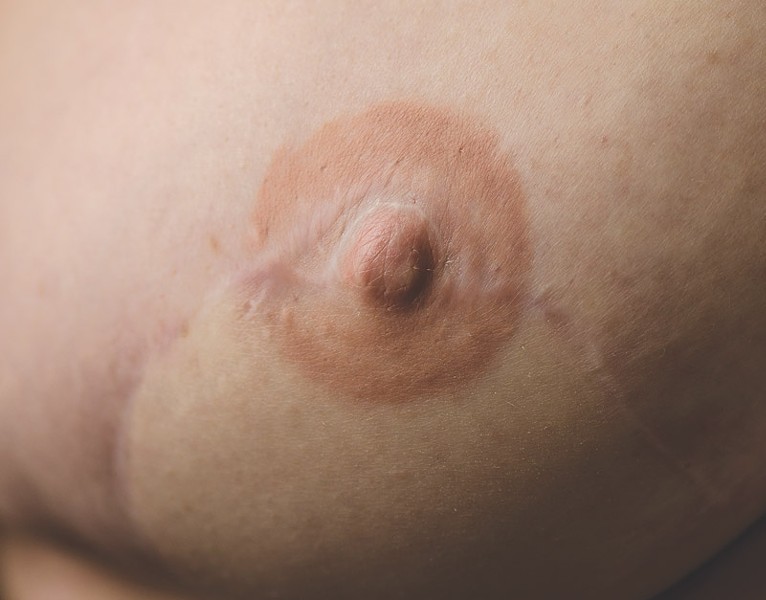 Public misperceptions concern her as well. Dill says she talks to people who don't fully get why she creates nipple tattoos.

"I think the biggest misconception is about mastectomies and how invasive they are," she says. "People ask me, 'Why are you tattooing their nipples? Where are theirs?' They think it's like other cancers where they open up the skin, take the cancer out and close it back up. They don't understand: they take the whole breast, the nipple, all of the tissue. But people think it's a lot less invasive than it is. It affects everybody no matter what you take off. If you took off your left ear, you'd really be self-conscious about it. It isn't that you'd necessarily feel like less of a person, but there's a piece of you being removed, it's going to be different, there's a huge transition."

Those are some heavy numbers. But through her compassion and art, Dill is doing something about it and sees the emotional impact first hand. It's healing. It's humbling. It's beautiful.

It was when Debbie Inzana was on a breast cancer survivors' online group discussion board that the subject of nipple tattooing arose. Inzana was nonplussed; after six months of chemo, six months of radiation, and having her breast and lymph nodes removed, she was done.

"I was like, 'I'm fine, I'm good,"' she says. '"I don't want any more surgeries. I'm done with treatment. I'm moving on.'" But she already had multiple tattoos over her body. Inzana relented and went to see Dill. She's glad she did.

There's a lot of talk about battling cancer. But that's not what Kyra Mills did when she was diagnosed two years ago with stage 2-B invasive intraductal carcinoma.

"There were four tumors on my left side and it had gone to my lymph nodes," Mills says. "It was considered metastatic. It was fairly aggressive. I dove into the whole process of what's next. I didn't fight anything. People talk about waging war and kicking cancer's ass; it was different for me. I just went with the flow and trusted the people who knew the most. I'm blessed with a beautiful family and friends, I handed them all my worries, I didn't have a worry in the world. They carried the burden."

Though the then-37-year-old Mills had cancer in one breast, there were statistics to consider.

"There's a 30 percent chance in the first five years if you have cancer in one breast statistically it will go into the other breast," she says. Mills opted for a double mastectomy.

"My thought was I'd already used my boobs," she says. "I'd nursed my daughter for two and a half years. They'd served their purpose and now they were what was making me sick — 'Get 'em out!'"

In her case, nipple tattooing was part of the discussion with the plastic surgeon as to what the steps would be. "At first, I was OK without it," Mills says. "It was my boyfriend who was an advocate — as all men are — that said, 'You've come this far...'"

"Once it was done, I was glad I did this," says Inzana. "Putting that nipple on was the final step in healing and feeling whole again."

Mills concurs. "It completed me," she says. It was a dramatic moment to have Dill finish: "It was so lovely to have this feeling of completion. It was the crown jewel on a masterpiece. TeeJay's work is so incredible, she has such skill. I was just drawn to her; she's such a real person. She didn't treat me with kid gloves. I felt like a real person. I felt just real pretty at that point."

And though the tattooing aspect of the whole process may be trivialized, or not fully understood, it is extremely vital to the women it helps heal, inside and out.

"It's very important part in the final process. Finally healing, mentally," Inzana says. Mills adds that "It's healing externally and your mind has to catch up."

"It's crazy," says Dill. "It's a huge change in how they see themselves, especially with the 3D tattooing. Because before, they had what they call a 'breast mound.' Basically it's a breast- shaped form with scars all over it. And every time they look at it they see this not-them thing with a big scar. When I do the tattooing for them, I mean, we cry, there are hugs. It's completely transformed back into looking like a breast. I've had multiple women cry and tell me now they're willing to let their husbands see them."

These women are rejuvenated, brave, and proud ... and they ain't shy.

"I had my surgery on December 5," Mills says. "I woke up with a flat tummy and new boobs. And New Year's Eve I was rockin' a black cocktail dress with no bra."

Inzana says she has shown practically all her coworkers, challenging them to tell the difference between her real nipple and the new one that Dill created.

"And they're like, 'That's so cool."' Both Inzana and Mills are strong advocates for the process, because, face it, not everyone gets it.

"I've encountered several just young and stupid girls who are like, 'Why didn't you just get implants?'" Inzana says. "And I'm like, 'Ok, just walk away because I'm going to smack you.' You can't just put in a balloon and call it a day. It's not a set of new tires."

No, but it's a new lease on life for women who had to stare into the unknown abyss and give up so much. It's clear that reconstructive nipple tattooing is a special tool in treating breast cancer survivors and the loss experienced in the cancer's destructive path. It baffles Mills to think some women would ever be reluctant.

"Why would you get an ice cream sundae without the cherry on top?"