March 05, 2019
Reverberations from Distinguished Educator Jaime Aquino’s report about the failures of the Rochester City School District have reached a new intensity. ROC the Future, a coalition of more than 60 Rochester-area community institutions and leaders, is pushing for major change in how the school district operates. And its members have asked State Education Commissioner MaryEllen Elia and the Board of Regents to include them in a decision about the district’s future. 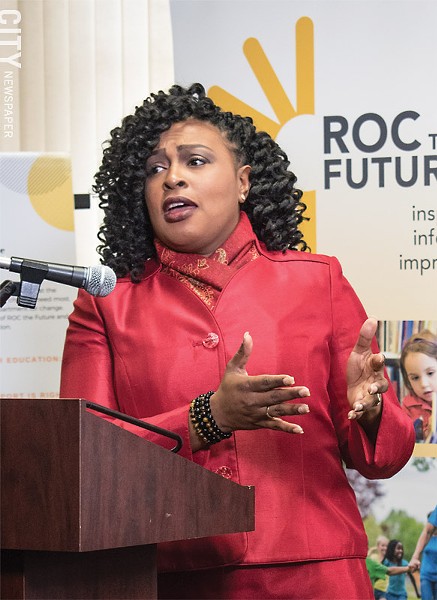 At a press conference on Monday, RTF’s leaders said that they agree with Elia that the Rochester school district is in “crisis” and that the status quo isn’t acceptable. While the district’s situation is dire, RTF leaders said, it has created a rare opportunity for change. And, they said, their collective concern and experience in dealing with children’s issues qualifies them to help bring about that change.

RTF's focus is the academic achievement of Rochester children, and its members include major non-profit organizations and children's advocates. Its executive committee includes Kirsten Barclay of the Farash Foundation; Dirk Hightower of the Children’s Institute, and Jennifer Leonard, CEO of the Rochester Area Community Foundation. Mayor Lovely Warren and Representative Joe Morelle were at the press conference Monday to lend their support for a campaign RTF is calling “Our Children. Our Future,” aimed at rallying community support for change.

In an emotional statement at the press conference, Warren recalled a student assembly when she was a freshmen entering high school. A school official told the students to look to the person to their left and to their right; one or both of them, the official said, would not graduate.

“No other suburban district would say something like,‘You don’t have what it takes,’” Warren said. She added, “We have to raise the bar in every school.”

Jaime Aquino’s report, which spurred RTF's action, included specific recommendations for improving the district and the school board’s operations, and Elia had given the school board and district administrators until February 8 to develop a plan addressing his recommendations. The board and the administrators met that deadline, and they’re now waiting for Elia’s reaction.

Elia's response could determine how the district will operate in the future, at least in the short term. At some public meetings Elia held in Rochester with Regents Wade Norwood and T. Andrew Brown, she warned that she would take some type of action if she wasn’t satisfied with the district’s plan. And Norwood and Brown said they might seek legislative changes.

At Monday’s press conference, Warren said that she has met with Elia to talk about the Aquino report and the school district. Her message to Elia, Warren said, is: “Don’t do anything without us. Come and talk to us about the decision you’re making.”

It’s not clear what change Roc the Future wants, however. Its leaders have criticized the district’s response to the Aquino report for not having “vision.” But they haven't said what they hope Elia will consider doing. They, and many people in the community, seem to want dramatic change, and yet so far they’re not saying what that change should look like.

And while RTF’s current effort seems singularly focused on the district’s failures, children’s achievement in school is also affected by poverty, crime, housing, and the other challenges Rochester is facing.

In addition, even though RTF leaders stressed at their press conference that they want to work with the school district and the school board, neither the school administration nor the board knew in advance of their decision to reach out to Elia and the Regents.

RTF'S decision to act germinated at a February 8 RTF meeting held to address the Aquino report and the district's response to it, according to the letter sent to Elia. RTF executive director Jackie Campbell said at the press conference that they decided to preemptively reach out to Elia after reading the district’s improvement plan.

Added to the uncertainty, the board is currently looking for a new superintendent, someone who will have had no say in the plan’s development but will be charged with implementing it.

RTF’s decision to approach Elia has fueled speculation that the group is hoping for some form of mayoral control. For instance, the letter said, “there is no evidence that RCSD’s governance has enabled – or can enable – the development and implementation of meaningful change strategies.”

And Warren issued a report after holding public meetings of her own concerning the Aquino report, which indicated that there may be some community support for some type of shared governance, if not mayoral control.

At the press conference, however, Warren said she didn’t think mayoral control was a solution to the district’s problems at this time. And RTF leaders said several times that they are not pressing for mayoral control.

And even if, in the end, Elia and the Regents decide that mayoral control is needed, that would take action by the state legislature. And as it did in 2010, when then-Mayor Bob Duffy tried to get mayoral control for Rochester, it would lead to a major fight with the union.

In addition to its push for involvement in Elia's decision, Roc the Future has posted a petition on its website to build community support for its effort "to define and create a new leadership structure for Rochester's schools." Meanwhile, Roc the Future, like the community, is waiting for Elia to say what she wants to have happen with the district, which should happen within the next few weeks.