Commentary: Mayor Lovely Warren has dug herself a hole

ILLUSTRATION BY DANIEL ALSHEIMER
Mayor Lovely Warren has dug herself a hole so deep it may be impossible for her to climb out.

The pressures enveloping her administration — a toxic stew of mishandling the death of Daniel Prude, criminal allegations of campaign finance violations, the crumbling of the Police Department command, and her increasingly fragile reign as the titular puppet master of local Democrats— are potent enough to potentially end her political career.

Warren has defied calls from protesters and the police union to resign, but she has declared her intentions to run for a third term next year.

When you find yourself in a hole, the first thing you do is stop digging. But Warren has managed to exacerbate her predicament with defiance and deflection intended to distance herself from her crises and the people she wants us to believe caused them in the first place.

She may have thought she was being proactive in firing her police chief after he had already announced his resignation and suspending her chief legal counsel and spokesman for allegedly failing to keep her informed of the circumstances of Prude’s death. But those things came off as her throwing subordinates under the bus to save face. 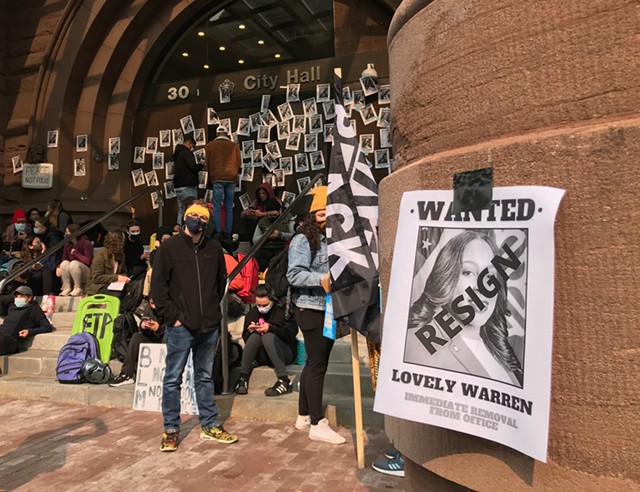 T-shirts emblazoned with a cartoon image of the mayor driving a bus over Chief La’Ron Singletary were being sold on Clinton Avenue.

Her own deputy mayor, James Smith, has even said that he had advised Warren to fire Singletary six weeks earlier, at the beginning of August, when Warren claims to have first seen the disturbing footage of Prude’s fatal arrest.

Then there have been the mayor’s gallingly sanctimonious statements about her leadership, like the one she made in an interview with WROC-TV: “We wouldn’t know what happened to Daniel Prude had it not been for me, Lovely Warren, insisting that we bring body-worn cameras to this city and putting it on our cops against what the union wanted.”

"We wouldn't know what happened to Daniel Prude if it hadn't been for me, Lovely Warren, insisting that we bring body cameras to this city and putting them on our cops."

There are currently four investigations into how her administration handled Prude’s death. There is the state attorney general’s criminal probe, the Police Department’s internal review, the City Council’s investigation, and Warren directed the city’s Office of Public Integrity to look into whether anyone in her administration — herself included — breached ethical standards. She also invited the U.S. Justice Department to dig in.

Timothy Kneeland, a political science professor at Nazareth College, is one observer who thinks the mayor can salvage her career. That can happen, he said, if the investigations exonerate Warren, she becomes “the most active, vocal, and vociferous” champion of police reform, and if her other crises vanish.

“Her best bet for survival is to follow the playbooks she’s following, which is to demand an open and transparent investigation of everyone involved, including her, because that way she has the possibility of being exonerated,” Kneeland said. “That would help her build back the trust of people who mistrust her right now.”

“But,” he added. “I don’t see her surviving a primary (next year) if there is any hint of a cover-up on her part. And that’s also if she isn’t indicted for campaign finance violations.” 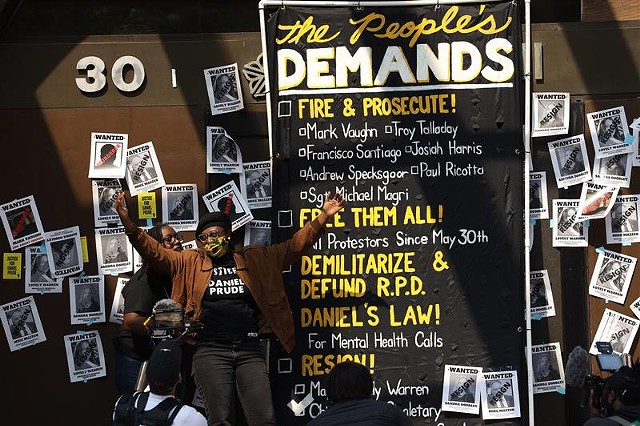 The investigations will likely focus heavily on the contents of a 325-page cache of documents compiled by Smith that purportedly encompass the Warren administration’s handling — and mishandling — of the death of Prude.

Warren released the voluminous record to justify the firing of Singletary and the unpaid suspensions of the city’s lawyer, Tim Curtin, and spokesman, Justin Roj.

Nothing in it refutes Warren’s insistence that she was unaware of what happened to Prude until early August, with one possible exception. But remember, the documents were culled by her right-hand man and did not account for face-to-face conversations or text message exchanges the mayor may have had with key players.

The possible exception is an April 10 email between Singletary and Roj in which Singletary wrote, “The Mayor has been in the loop on such since 3/23.” Prude was arrested on March 23 and the mayor has said Singletary advised her that day that the arrest was problematic. Prude died a week later.

Since his suspension, Roj has fallen on the sword, releasing a statement that said in part that he “should have questioned the chief further and/or taken the opportunity to discuss his email with the mayor.”

This is where the red flag goes up. It is inconceivable to many that no one in the Warren administration recognized the significance and potential consequences of Prude’s death and had a chat with Warren about the implications.

Even if Warren and Co. didn’t recognize the pending calamity before them from the outset, one would think they would dig deeper into “that Prude thing” after the country erupted in protest over the killing of George Floyd — three months before Prude’s death became public.

Instead, they appear to have buried their heads in the sand while Warren dug her hole.