Commentary: About the Monroe County GOP’s change of heart

February 18, 2020
Monroe County Republicans want voters to believe they’ve had a change of heart about a problematic law they rammed through the County Legislature a few months ago that criminalized intentionally annoying police and emergency responders.

Recently, the law’s lead sponsor, county Legislator Karla Boyce, a Republican, stood with her Democratic counterparts in the legislative chambers to announce that she would sponsor another bill to repeal the wildly unpopular so-called “police annoyance law.”

“Sometimes you don’t know what you don’t know,” Boyce said, explaining that her decision was the result of months of soul-searching and talking to many different people about the unintended consequences of the law. 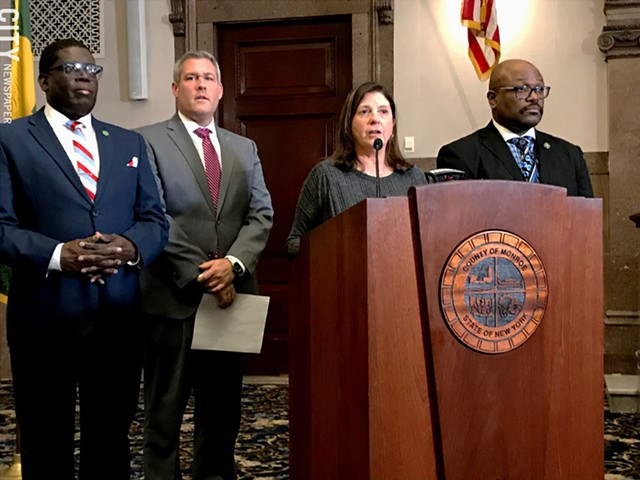 All 15 Republican legislators didn’t know what they didn’t know? All of them had a change of heart? Not likely.

There is a bigger picture here, and that is the GOP regaining its footing in Monroe County. Its world of one-party rule came crashing down in November with the election of Democrat Adam Bello to county executive and the dwindling of the Republican majority in the Legislature to a single seat.

Two days after Boyce stood with Democrats in the chambers, an experience that was undoubtedly humbling for her, the Monroe County Republican Committee announced she was its candidate for county clerk — the highest countywide office up for grabs this year.

The announcement confirmed a party secret that Boyce had all but spilled in the chambers when she temporarily froze and searched for words after being asked by CITY whether she intended to run for higher office this year, specifically county clerk.

“I may consider something, but I don’t know that for a fact,” she finally answered.
It is hard to believe that Boyce, a seasoned and popular elected official who represents Mendon and Rush and parts of Henrietta and Pittsford, didn’t know she would be her party’s pick for clerk 48 hours before it was announced.

That’s why it’s also hard to believe repealing this law is about Republicans having a change of heart. Just three months ago, they were so keen on the law that they introduced it as a “matter of urgency,” allowing it to skip the committee process and cutting short the public debate.

In explaining her about-face, Boyce said she heard “limited feedback” between the time the bill was introduced in October and its passage in November, noting that only two residents spoke against it at a public hearing held the day the Legislature voted.

Well, that’s what happens when a bill is introduced and put on a fast track in the waning weeks of campaign season. It goes largely unnoticed.

CITY published a story about the bill weeks before it went to the floor for a vote, quoting a criminal defense lawyer who questioned the measure’s constitutionality. A couple of television stations, WROC (Channel 8) and WHAM (Channel 13), devoted some time to the bill prior to the vote as well.

But that was all the media attention the bill got until after it passed the Legislature along party lines. Then everyone, it seemed, raised a pitchfork. Lawyers, civil liberties and social justice advocates, and the top law enforcement brass in the county spoke out against it.

The opposition mounted for weeks and culminated in a second, raucous public hearing and a protest outside the County Office Building. Why didn’t the Republican legislators have their road-to-Damascus moment then? The road was Main Street.

Now, here we are backpedaling.

Repealing the law matters. The law duplicated protections already in place for police and first responders and potentially criminalized constitutionally protected conduct, putting the county at significant risk of a lawsuit.

But also what matters is how we got to this point.

Maybe a change of heart had something to do with it. But it smells more like a change of plans to clean up political baggage and protect Republicans running for office.