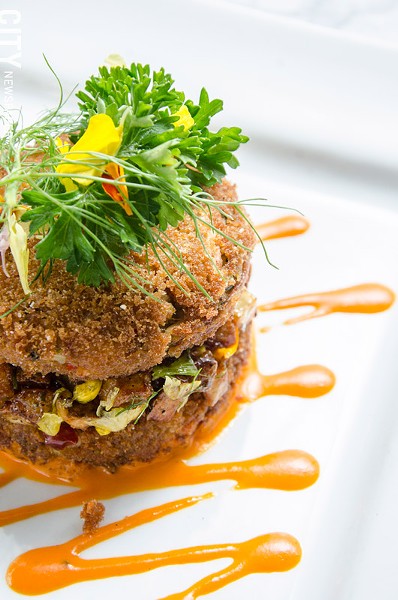 French cuisine is not usually vegan. Pates, tartares, cheeses? It's just a tasty, Gallic parade of well-prepared animals and their byproducts.

But Vive Bistro and Bakery asserts that food can be both French and vegan. While the preparation might not be completely faithful to its French lineage, the food remains satisfying. The bistro's pates are made with wild mushrooms; cheeses are derived from nuts or soy; and tartars are composed of garden vegetables and fresh herbs.

The menu's choices let you eat light or settle in for a hearty meal, complete with drinks and dessert. Included in the smaller plates are tartines ($2.75 each or 4 for $10), which are petite, open-faced sandwiches. In one version, mashed avocado is paired not with lime, but sections of red grapefruit: The fruit is a touch sweeter than lime, and the result is light and refreshing. Another tartine pairs heaps of Vive's bleu cheese with sweet port-infused cherries. If you don't think vegan food can taste rich and voluptuous, this will change your mind.

Vive's cheese plate ($18) features three, house-made vegan cheeses: boursin, brie, and bleu. The boursin (made from soy) is herbal and creamy, and the bleu cheese (using cashew) has a touch of funk and ample blue-green hue. The brie (another using soy) pulls off the most interesting trompe l'oeil with a waxy, edible rind, and a soft, but not runny, interior. These cheeses won't be mistaken for their dairy cousins (they aren't as fatty or lush), but they are delightful in their own way.

This is especially true when spread on the crostini, which tastes as though it had a sexy, ménage a trois with garlic and olive oil — in other words: delicious. Adding color and complexity are glazed nuts, and figs in a balsamic vinegar and port wine syrup. After all the cheese, nuts, and figs had been eaten, my husband and I dragged our bread through the syrup, soaking up every, deeply-colored drop.

Vive's poutine ($10) should not be missed. It starts with thinly-cut potatoes fried until crispy and brown. The gravy is deeply flavored and oniony, with tender strips of caramelized onions throughout. Dollops of smoked vegan mozzarella relax with the gravy's heat. Though it doesn't turn into long, pullable strings like cheese curds do, it does melt down and pool into the gravy. It's my new, favorite Rochester poutine.

Socca Pissas ($13-$14.50) are round chickpea flat breads piled with toppings — basically a French pizza. The socca is golden yellow, like ground turmeric, with crispy edges, and the middle is softer under the weight of toppings. Its flavor is neutral but if eaten without any accompaniment, there's a just a hint of bean flavor. The Blanc ($13.50) loads the socca with confit garlic, caramelized onion, artichokes and ricotta. The onions were pleasantly sweet and rich, though the garlic's flavor was too muted — an extra sprinkling of salt would have made the flavors pop.

Croquettes de la Mer ($15) are Vive's take on crab cakes. Two croquettes with a crispy, deeply golden-brown crust sandwich diced root vegetables. On the plate was a ribbon of sweet, red pepper rouille. Breaking into the croquette, the inside even looked like it's made with lump crab meat (owing to hearts of palm). No, there is not a taste of the ocean, but then, many crab cakes don't have that anyway.

Despite a growing vegan restaurant scene, some diners still shy away. To ease the minds of the vegan-phobic, Vive refers to itself as "100-percent plant powered." But it shouldn't be surprising that vegan preparations can appeal to wide audiences. Vive's kitchen doesn't turn out 20 slightly different takes on root vegetables, but instead, creates lots of appealing renditions of dishes that are not typically vegan. Are they exactly the same as the originals? No. Are they worth your time? Yes.