Comics, and maybe a little catharsis, on display at indie expo 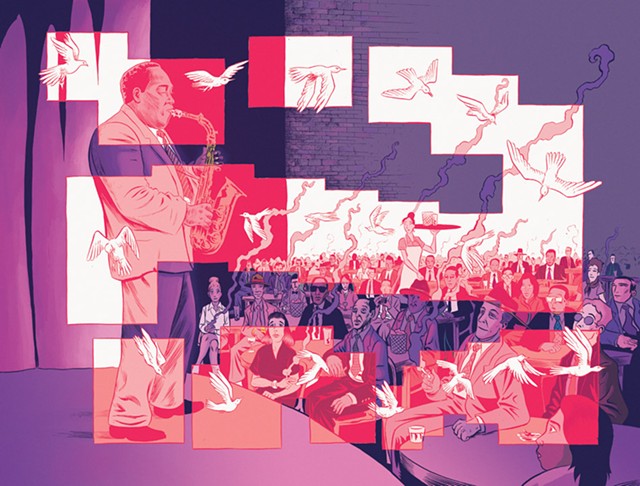 After taking the pandemic year off, the Rochester Indie Comics Expo (RICE) will return this weekend, showcasing more than a dozen local creators selling books, prints, and other ephemera.

Among them are musician and comics author-illustrator Dave Chisholm, whose graphic novels delve into his love of jazz and jazz greats, and at times, dip into the realm of science fiction, too.

Chisholm’s first book, 2017’s “Instrumental,” followed the story of a struggling jazz musician who comes into possession of a powerful trumpet that is both a tool for creating captivating music and a catalyst for destruction. The horn solves his stagnation problem, but at a cost.

And while everything was shut down in 2020, Chisholm was one of the creatives who filled the time with a flurry of activity. Late in the year he published “Chasin’ The Bird: Charlie Parker in California” as a companion to the album “Bird in LA,” which features previously unreleased recordings from Parker’s celebrated time on the West Coast in the years before he died.

But earlier, in February he published the first chapter of “Canopus,” a four-part saga that follows an amnesiac scientist who has crash landed on a lifeless planet, accompanied only by a robot-like creature. The story, Chisholm told CITY, was born of his efforts to survive the poison of resentment.

Chisholm isn’t the only RICE participant who uses his art to work through personal matters.

Another vendor, Jackie E. Davis, is the author of the relatable everyday-musings series “Underpants and Overbites,” a comic known for its candid exploration of personal quirks, anxiety, and growth. In it, a potato-shaped Davis recounts memories and moments of daily life’s ups and downs with an overarching can-do tone (and some periodic snark).

And Tom Lake’s “Near Death Flying Turtle” series combines existentialism and doodles of the titular reptile floating in colorful spaces or voids, at times created in collaboration with other artists. Non-sequiturs, a love of Brussels sprouts, and very adult epiphanies arrive in the form of simple, child-like wonder (one of my favorites features line-drawings of the turtle in bright pink and yellow fields, stating “I’m so thankful for the opportunity to love and hate myself this much”).

Rebecca Rafferty it CITY's life editor. She can be reached at becca@rochester-citynews.com.