Come to where the satire is 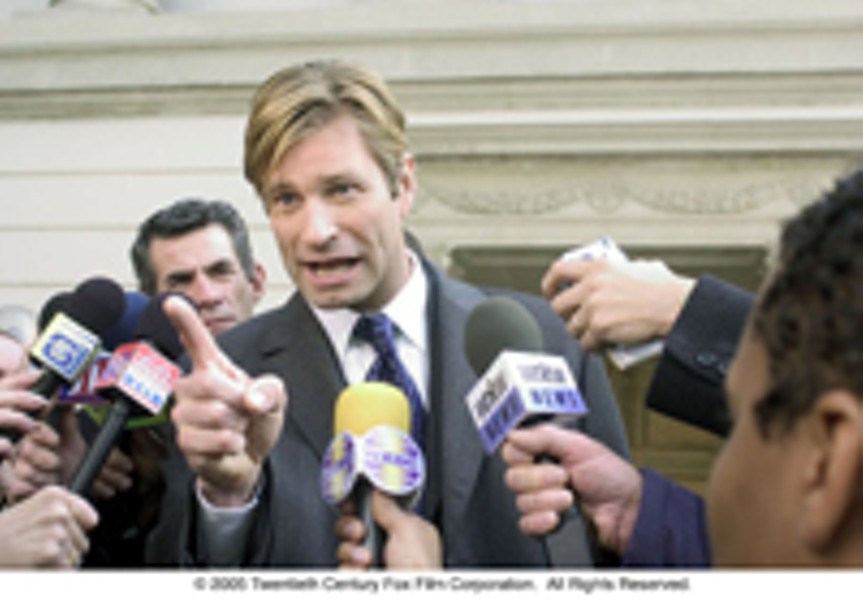 Fox Searchlight Pictures Leader of the packs: Aaron Eckhart pushes the puffs in "Thank You For Smoking."

Among certain inalienable rights we Americans enjoy are life, liberty, the pursuit of happiness, and the freedom to harm yourself and those around you with cigarette smoke. And while there are many working overtime to strip you of that last privilege, you can rest easy knowing that there are others hell-bent on ensuring that you can continue to light up whenever you please (so long as that's outside). Writer-director Jason Reitman's wily satire Thank You For Smoking takes us inside the mind of one such warrior, a lobbyist for Big Tobacco with a refreshingly amoral view toward his mortgage-paying and child-supporting job.

As vice president at the Academy for Tobacco Studies, Nick Naylor (the suitably smug Aaron Eckhart) is charged with spinning the damning evidence regarding the detrimental health effects of tobacco, and the opening talk show scene establishes that he is very good at what he does. It also sets the stage for Nick's marquee tussle with a liberal Vermont senator (William H. Macy, in a regrettably clichéd take on an easy target) who would like to see a rather gruesome skull-and-crossbones warning adorn every pack of cigarettes manufactured.

But Nick's pigheaded boss (JK Simmons, essentially reprising his Spider-Man role) has other business for his star pupil to attend to first, including raising the profile of smoking in Hollywood (Rob Lowe is flawless as a kimono-wrapped superagent) and dangling a suitcase stuffed with cash in front of the original Marlboro Man (Sam Elliott --- you got a better idea?), now stricken with cancer and ready to drop dime on his former employers.

Nick's one-time wife (Kim Dickens from Deadwood as that rarest of characters, the decent ex) is growing concerned about the message Nick's job might be sending to their son Joey (Cameron Bright, the weirdly ethereal kid from Birth), and much of the film is spent watching Nick justify his line of work to his skeptical son, tutoring him in the finer points of debate: "If you argue correctly, you're never wrong." But the best parts of Smoking are the whipsmart scenes featuring the MOD Squad --- that stands for Merchants of Death --- Nick's counterparts in the alcohol and gun lobbies, as well as his only friends. Played by Maria Bello (a recent Golden Globe nominee for A History of Violence) and David Koechner (The 40-Year-Old Virgin), Polly and Bobby Jay regularly commiserate with Nick about the hypocritical hassles of toiling in industries regularly subjected to both the adoration and resentment of its customers.

Reitman adapted the screenplay for his film from Christopher Buckley's novel and exhibits a possibly genetic predisposition for filmmaking (dad Ivan made Stripes and Ghostbusters), but the incorporation of stylish flairs like time-lapse, animation, and archival footage in no way distract from a howlingly witty script. And the vintage pro-smoking tunes from Tex Williams, the Mills Brothers, and the Kingston Trio hearken back to a time when everyone seemed to be alive with pleasure. Curiously, however, Nick, a confessed nicotine addict himself, is never actually seen smoking. Is this a copout or a sly nod to the film's assertion that the only people who smoke in movies are "Russians, Arabs, and villains"?

Eckhart's golden-boy demeanor and arrogant chin are perfect for the role of Nick, a conveniently principled man who traffics in shades of gray but never stops talking long enough to question his ethics. It's taken him a little while to find a part that allowed him to follow through on the abundant promise shown in his breakthrough film, 1997's In the Company of Men. Despite the presence of a ton of talent (I didn't even get around to mentioning Robert Duvall's slippery turn as a julep-swilling tobacco bigwig) Eckhart is in nearly every scene, alternately repulsing and impressing us with Nick's integrity.

I also didn't mention Katie Holmes' performance as a driven newspaper reporter, but that's because she was absolutely dreadful (and dreadfully miscast). What concerns me, though, is this growing trend that finds journalistas seducing their subjects in pursuit of the whole story (it also happened last fall in Atom Egoyan'sWhere The Truth Lies). I had no idea the practice was so epidemic. Fortunately for me, there's still time to claim the French maid get-up and handcuffs on my tax return.

Thank You For Smoking (R), directed by Jason Reitman, is playing at Little Theatres, Henrietta 18, and Pittsford Cinema.