Teen mentorship at the core of New City Café 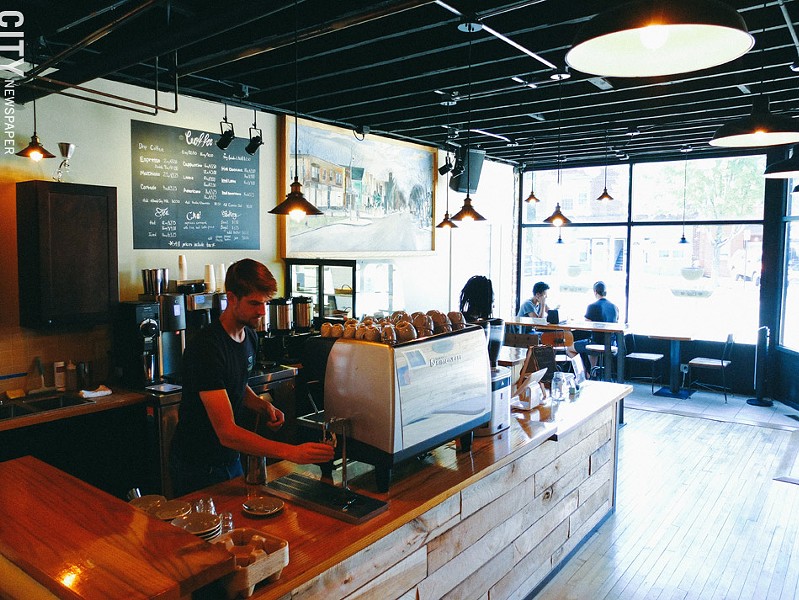 New City Café on Parsells Avenue serves a range of espresso-based drinks, filter coffee, and locally-made pastries — but the real purpose of New City is behind the scenes. The café, which opened on June 9, currently employs three teenagers as part of its mission to mentor local youth, and Executive Director John Lee hopes that number will only rise.

The café is a subsidiary (and next-door neighbor) of 441 Ministries, a nonprofit Christian organization that works with local churches and other groups to foster growth in Rochester's Beechwood neighborhood.

New City was created by Lee, who joined 441 Ministries about five years ago as a mentor to children and teens in the kids program. Lee noticed that his mentees tended to drift as they got older, and many stopped showing up to the program altogether. Lee began thinking of ways the ministry could retain its members while also equipping them with transferrable, real-world skills. He pictured a nonprofit venture where teens could learn and practice business principles, make a fair wage, and help revitalize the Beechwood community at the same time. Currently, his three teenage employees are working toward barista certification while also learning about customer service and the ins and outs of a small business.

The café and coffee bar sources its goods from local businesses: bagels are from Balsam Bagels; doughnuts from Ridge Donuts; pastries from Cheesy Eddie's; juices from Red Jacket Orchards; and chai tea from the Chai Guy at the Public Market. Lee expects more collaborations will be coming, and his team hopes to work with other Rochester coffee bars as well. "The coffee community in Rochester is defined by collaboration, not competition," says Assistant Director Nick Trombley.

For assistance in getting started with the coffee side of things, Lee turned to Patrick "Peach" Hardy, owner of Hero-In Coffee in New Jersey. Hardy hires recovering heroin addicts and helps struggling individuals reclaim their lives through employment and community connection, while also producing a range of specialty wholesale-priced coffee beans. New City Café currently gets its beans from Hero-In, and Hardy traveled up to Rochester to help train the café's staff.

Trombley, a 2016 graduate of Eastern University, says that like most college students, he stumbled into a love of coffee as a means to keep himself awake. However, it wasn't long before he began to see the connections between his caffeine fix, his major in economic development, and his passion for socially responsible business. "There's nothing that connects us more to the third world on a daily basis than coffee," says Trombley, who is making it a point to carry fairly traded and ethically sourced coffee at New City.

Trombley and Lee crossed paths at the New City Fellowship, a congregation which meets at the Community Place of Rochester at 145 Parsells Avenue. Shortly after graduation, Trombley received an email from the fellowship announcing Lee's plans for a café, and he got in touch with Lee to find out how he could help. The two met for breakfast at The Golden Fox to hammer out the details and left that morning as business partners.

Lee and Trombley are now both barista-certified, and train their student employees one-on-one. "We've lost the art of apprenticeship," Lee says, explaining his commitment to individual mentorship. Just as he mentored children and teens with 441 Ministries, Lee works closely with his student-employees to teach important work and community values. For several of the students, New City Café is their first job.

In addition to providing quality coffee and snacks to the residents of Beechwood as well as jobs for teens, the café aims to be a gathering place where community members feel a sense of "belonging and warmth," Lee says. Plans for music and art nights are in the works, and pieces by local students and artists already adorn the pallet-wood walls.

Next to the pastry case, a large mural of the Beechwood neighborhood by local artist Dunstan Luke takes up much of the wall. The work depicts the corner of Parsells and Greeley where the café stands, and shows the area thriving and full of diversity. For Lee and Trombley, the mural conveys optimism about Beechwood's future while still maintaining its personality. As Lee likes to tell his students, "Never lose your flavor."