The City Planning Commission approved the plan in April, but it has been awaiting action by City Council's Neighborhood and Business Development Committee since then. The committee approved it last week, sending it to the full council, which voted 5-4 in favor of it. The members didn't discuss the measure, nor did any of them explain their votes. The "no" votes came from Council Members Molly Clifford, Malik Evans, Jackie Ortiz, and Elaine Spaull. Council members Loretta Scott, Adam McFadden, Michael Patterson, Willie Joe Lightfoot, and Mitch Gruber voted in favor of the measure. 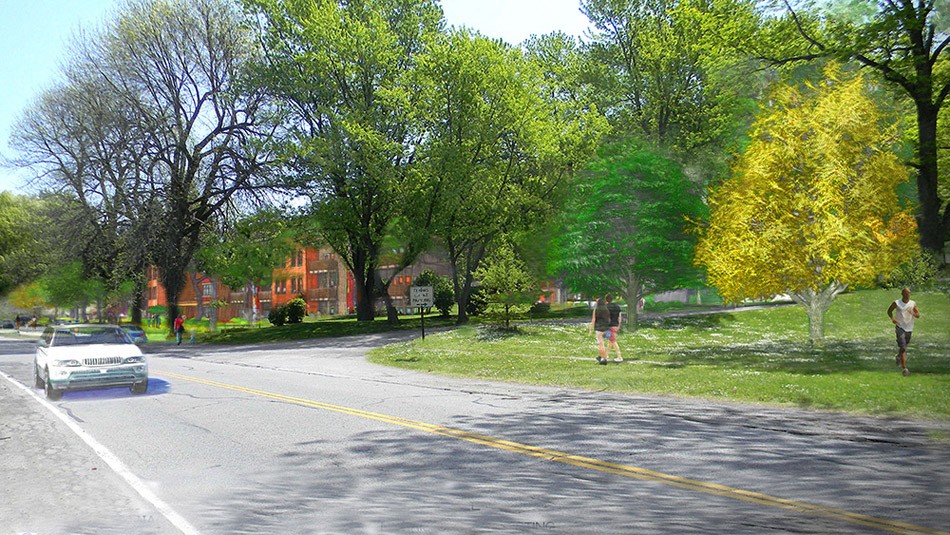 The proposal has been particularly controversial because of its location. It's on a parcel of land specifically deeded for affordable senior housing in 1957, but it's surrounded by Cobbs Hill Park. Rochester Management wants to replace the current 60 units, which are in six single-story buildings, with 104 units in six buildings two and three stories tall. The larger buildings would be more noticeable in the adjacent park.

While the apartments in both the current and the proposed complex are classified as affordable housing, the current units have very low rents. Some of the new ones would continue to have those rents, but others would be more expensive and, while still considered affordable, would be available to people with higher incomes.

Rochester Management has argued that the current units are outdated and that the new complex will help address Rochester's serious shortage of affordable housing.  Representatives for the organization repeated that argument Tuesday night when they spoke during Council's public forum.

Critics include a large number of neighborhood organizations, some of them near Cobbs Hill Park but some in other parts of the city. Opposition has also come from environmental and social-justice groups. They have argued that the new complex reduces the number of very-low-rent apartments in the city, that the current Village can be upgraded at a reasonable cost, and that the new buildings are too intrusive in a park setting. Some opponents have argued that the site should eventually be returned to parkland.

Tenants of Cobbs Hill Village include both supporters and opponents, both of whom spoke to council Tuesday night.

This post was has been updated and revised to reflect the City Council vote.