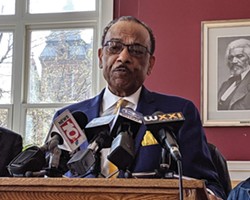 Rochester police officers have been using body-worn cameras for nearly three years, and so far, a citizens’ group monitoring the program is giving it “generally high marks.” But city officials need to make improvements in key areas, the group says.

The Rochester Police Department began using body-worn cameras in the summer of 2016. In 2017, city officials established a partnership between the Coalition for Police Reform, which had been pushing for the cameras’ use, and the Rochester Police Department, to provide continuing community input about the program. At a press conference this morning, the Community Justice Advisory Board, a subcommittee of the Coalition, issued its first report on the cameras’ use.

The report represents a milestone, said Advisory Board co-chair Lewis Stewart, because it's the first time citizens have been given this kind of authority “in working with the police in order to shed light on police policies, practices and procedures."

The report praises the transparency of the RPD’s policy and process, its attention to privacy concerns, policies for storing the cameras’ footage, and the guidelines for releasing the footage to the public. The board also praised the RPD “for its ongoing efforts” to monitor the body-worn camera program and to adjust policies and procedures.

The availability of camera footage “appears to be significantly helpful” in dealing with civilian complaints about police conduct, the report says. Between 2014 and 2016, the Civilian Review Board – an advisory body that reviews investigations into misconduct charges – "sustained" about 20 percent of civilian complaints against RPD officers. Through the first three quarters of 2018, the rate of sustained allegations was about 50 percent, says the report.

Previously, the Civilian Review Board gave a finding of “unprovable” to about half of the civilian complaints filed about officers’ conduct, the report says. In 2017, that figure dropped to 18 percent, and in the first three quarters of 2018, to 8 percent.

Body-worn camera usage hasn’t resulted in more final “sustained” determinations, however, since the police chief, not the Civilian Review Board, makes the official decision. And, the report says, the cameras haven’t seemed to reduce the use of force by officers.

“We are hopeful,” the report says, that as the RPD gets more experience with the cameras and improves its use of them, “we will also begin seeing the results seen in many other communities: reductions in police use of force, de-escalation of police-civilian encounters, and fewer civilian complaints.”

Among the improvements the coalition wants in the RPD’s body-worn camera program:


Until recently, the city has also required that all footage released to civilians be blurred and that the audio in the footage be removed. “Obviously,” the report says, “this makes the viewable footage nearly useless.” As a result of a December 2018 court ruling, the city has dropped that blanket policy and is listing the reasons for redactions that are made, the report says.

Police Chief La'Ron Singletary released the following statement in response to the report:

Alex Crichton of WXXI News contributed to the reporting for this article.