May 28, 2020
Before it has even started, the 2020 summer concert season appears to be over at Constellation Brands-Marvin Sands Performing Arts Center.

And if Darien Lake Amphitheater is to go ahead with what it has in hand right now, it will be presenting three shows. 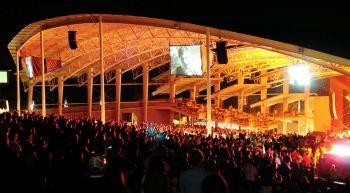 The season-opening show at CMAC was to be Saturday, May 30, with The Trey Anastasio Band, featuring the lead singer and guitarist of Phish. Darien Lake’s season was to open June 14 with the Zac Brown Band.

Both shows have been canceled, as the coronavirus pandemic continues to devastate the entertainment industry.

The venue has also postponed Ratt, two sold-out shows with country star Luke Combs, and Kiss. Postponed shows at CMAC will not be rescheduled until 2021, according to a post on the Canandaigua Chamber of Commerce website. And that’s already happening. Of the final two concerts that CMAC had announced for this summer, The Tedeschi Trucks Band is now rescheduled for June 30, 2021. And country singer Thomas Rhett has been rescheduled for Aug. 22, 2021.

Across the country, live-music prospects at large venues for the entire year seem increasingly dismal. As Jay Marciano — the chairman of AEG Presents, one of the country’s largest promoters — told The New York Times last week, “It doesn’t seem likely we are going to open in the fall.” Industry insiders from the worlds of theater and dance also have increasingly echoed that belief.

The national touring scene has collapsed. Take it from John Scher of New York-based Metropolitan Entertainment Consultants. It was Scher whose company built and opened Darien Lake Performing Arts Center in 1993.

“I don’t think there’s any real reason to believe that there can be national tours until 2021 or until a vaccine is there,” he told nj.com earlier this month.

The Zac Brown Band is among 12 of Darien Lake’s first 14 scheduled shows — including blues-country star Chris Stapleton and rockers The Black Keys — that have been canceled outright.

The remaining two of that first group have been rescheduled: The Doobie Brothers’ 50th Anniversary Tour is now on for Aug. 7, and country singer Luke Bryan is set for Aug. 16. They join one show whose date has not been affected, so far, the metal-rock lineup of Korn and Faith No More on Sept. 6.

Millions of summer-concert season dollars are floating in the air, waiting for a place to land. Live Nation, which operates more than 70 music venues across the nation, including Darien Lake, has estimated that the cancellations would add up to a loss of $435 million. Overall, Billboard magazine estimates that $3.5 billion has been spent on tickets in this country for summer concerts and festivals.

Canceled shows and postponed shows are distinctly different. Ticketmaster and Live Nation Entertainment (the two merged in 2009) altered their refund policies in March, when the wording on ticket sites was changed from “if an event is postponed, rescheduled or canceled” to “refunds are available if your event is canceled.”

So Ticketmaster is automatically refunding money for people who purchased tickets to canceled shows at CMAC or Darien Lake. But for postponed shows, ticketholders will be sent an email upon the scheduling of a new date, explaining the options: Your ticket will be good for the new date, or you have a 30-day window to request a refund.

If 60 days passes after a show postponement is announced and a new date is not announced — certainly a strong possibility considering the complexity of rescheduling so many tours amid a coronavirus pandemic — those ticketholders will then be offered a 30-day window to request a refund.

Jeff Spevak is the arts and life editor at WXXI, a media partner of CITY. He can be reached at jspevak@wxxi.org.