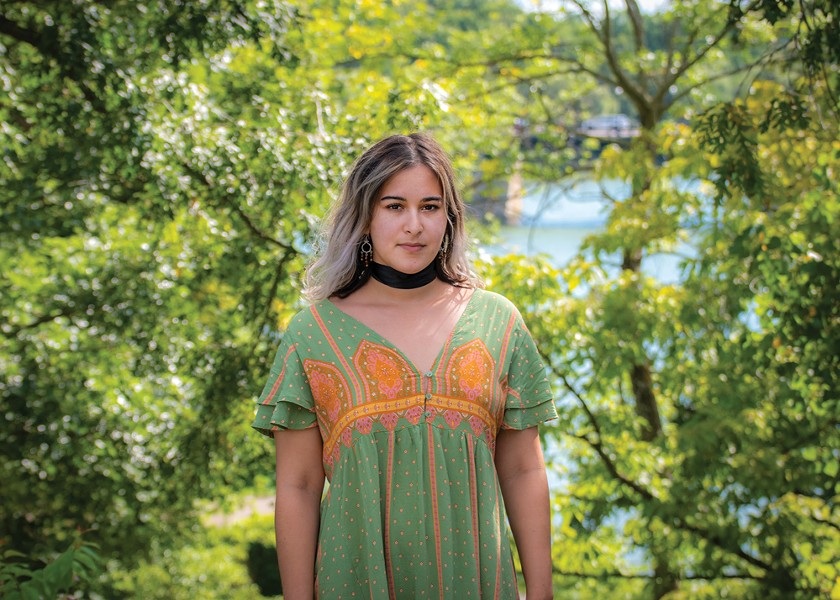 PHOTO BY RYAN WILLIAMSON UR senior Ashley Bardhan: Meaningful action on climate involves more than presenting a plan to a government .

The seriousness of climate change, now more accurately called global climate disruption, increases by the day. And that's the case whether you look at it as an environmental and ecological issue, a political issue, a social justice concern, or an economic factor.

Two students at the University of Rochester, Ashley Bardhan, a senior, and Zophia Dadlez, a junior, have organized a September 20 climate strike on their campus. The action, which starts at 11 a.m. in Wilson Commons, will take the form of a teach-in. Speakers, including UR professors as well as representatives from the Rochester People's Climate Coalition and the Pachamama Alliance, will discuss different aspects of climate change, Bardhan says.

Climate change is a "deep and multifaceted issue" influenced by power structures and capitalism, Bardhan says. Many people may not be aware that meaningful action on climate involves more than presenting a plan to a government and having government enact it, she says.

"I just want to highlight the power of knowing things with this event," Bardhan says.

Community members, not just UR students, are welcome at the event, Bardhan says.

Metro Justice will hold a climate strike-related event on September 20 for its members and anyone from the public who's interested. It's preparing a Rochester for Energy Democracy campaign and will give a presentation followed by a meet-and-greet at 6 p.m. in its community room at the Hungerford Building, 1115 East Main Street. (Metro Justice is located inside of Door 7.)

The organization especially wants to attract volunteers to help shape the campaign and roll it out. Its focus will be on transitioning to a 100 percent renewable energy system that's focused on benefiting communities and the environment instead of making profits for energy companies, says Mohini Sharma, lead organizer for Metro Justice. It'll also stress the importance of finding ways to help fossil fuel industry workers move into green jobs and ensuring that low-income communities and communities of color benefit from jobs in the green economy, Sharma says.

The Rochester Climate Strike, which is the biggest of the local events, will happen on Friday, September 27, starting at 3:30 p.m. outside of Rochester City Hall, 30 Church Street. Several local organizations — including Metro Justice, the Rochester People's Climate Coalition, Hope Climate Movement and other youth climate groups, and SEIU1199 — have been organizing the rally and march. It's open to the public.

The march will make several stops, and at each location organizers will read off a set of actions they want institutions and governments to take. Neither the specific locations nor the demands have been released yet. But Sharma did offer one example: New York State, which set a goal of being carbon neutral by 2050, should instead make aggressive efforts to be carbon neutral by 2027.

"Our overall message is that every level of government needs to do more and needs to do it faster," Sharma says. New York State has a chance to be a leader.

The climate strike will also stress the importance of community action on climate, and of the need for individuals to get involved in collective climate action efforts.

"We really want to communicate a sense of urgency and necessity," Sharma says.

This article has been update to correct the day of the week on which the Rochester Climate Strike is happening.