RELATED STORIES:
Climate change: it's up to you
Earth Day Events

Rochester's history with the environment is complicated.

The city's early settlers marveled at High Falls, harnessing its roaring cascade to power their mills. But the industries mistreated the river by using it as a dumping site for their waste.

The region also has some of the best farming soil in the world. But decades of decentralized development — sprawl — has eaten away acre after acre.

It's true that there has been progress on some fronts. The Genesee River is not as polluted as it once was, for example.

But the Rochester region still has its share of environmental problems. Several issues — contaminated former industrial sites, for example — have persisted for decades. Other threats, such as the proliferation of tiny plastic particles in the Great Lakes, are just emerging. And the area has already started to experience effects from unmitigated global climate change.

Earth Day is an opportunity to draw attention to those issues.

"That's kind of what Earth Day is about," says Frank Regan, a local Sierra Club member who runs rochesterenvironment.com. "We've got a few moments to get people's attention."

Five of the biggest local environmental issues are explained in the sections below. The list is not a comprehensive catalog of the area's environmental problems; it's meant to heighten awareness of a few critical issues.

And Rochester has historical examples of why awareness is important.

Take Irondequoit Bay, an ecologically and economically important part of the Lake Ontario coast. Approximately 50 years ago, the bay and its tributaries were turbid and withering.

Thanks to the countywide consolidation of waste and storm sewer systems, including the construction of better, centralized treatment, the bay and its tributaries are clearer and healthier. 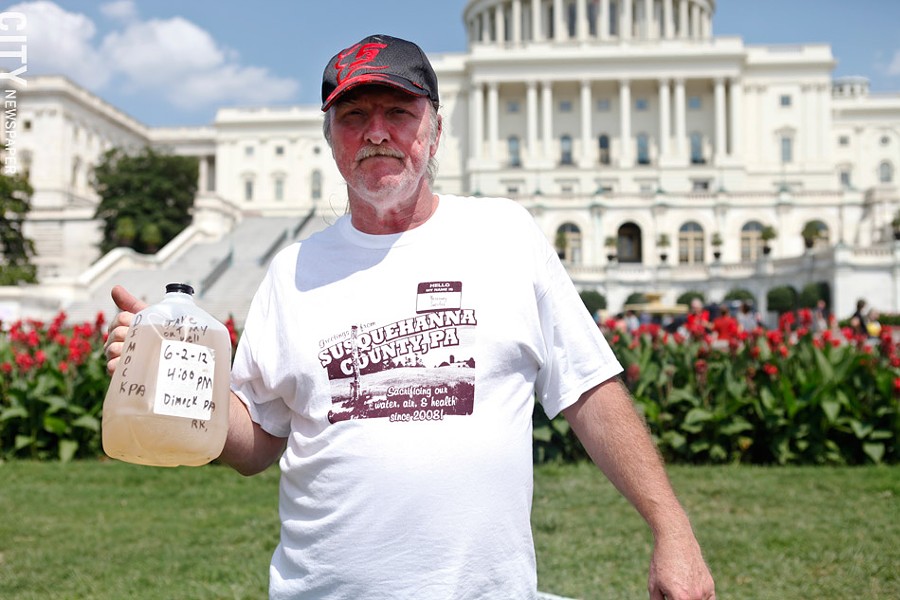 The environment is more than just forests and cute animals. It's water, air, food, shelter, and more. And it's influenced, perhaps more than ever, by what people build, put down their drains, and buy.

Between Lake Ontario, the Genesee River, and a few of the Finger Lakes, the Rochester region has substantial freshwater resources. In recent years, governments, institutions, and residents have intensified efforts to keep those water bodies healthy. But problems persist.

The water along the lake's shore, especially a recessed area known as the Rochester Embayment, has long been plagued by nutrient pollution, phosphorus in particular. The phosphorus encourages algae growth, which in turn encourages bacterial growth and clouds the water.

The lake provides drinking water for much of Monroe County, so its water quality is important from a public health perspective. But the algae, bacteria, and cloudy water often lead officials to close the beaches to swimming in the summer.

Researchers and government officials have tried to address the sources of the pollution. They've improved water infrastructure and have even tried to get people to avoid using fertilizer on their lawns.

But half of the phosphorus that enters the lake is still from human-related sources, says Joe Makarewicz, a SUNY Brockport professor who has spent years studying pollution in the lake and the local streams that flow into it.

For the past few years, Makarewicz has led efforts to develop a sophisticated model that will let researchers close in on some of those remaining phosphorous sources. For example, researchers have long suspected that fertilizer from farm fields is a culprit, and Makarewicz's model shows that's true.

But the new model also shows that smaller waste water treatment plants in the Genesee River watershed — which empties into the lake — are a problem, too, Makarewicz says. The plants aren't held to the same regulatory discharge standards as Monroe County's larger system.

That's good and bad news. The problem spots are easy to locate and address, unlike other nutrient pollution sources, Makarewicz says. But upgrading the plants would be expensive.

"Until we tackle the Genesee, the near shore and the Rochester Embayment will continue to have problems," Makarewicz says.

In Lake Ontario and the other Great Lakes, a new problem is emerging, too. Researchers have identified tiny plastic fragments in the waters of each lake. They say consumer products such as exfoliating face washes, which often contain tiny plastic beads, are responsible. Water treatment plants probably aren't filtering them out.

Scientists say they're worried the microplastics could be detrimental to the health of fish and other marine wildlife.

Hemlock and Canadice are the last of the Finger Lakes with completely undeveloped shorelines, and that's no accident. The lakes supply drinking water to the City of Rochester. Many years ago, the city purchased the land ringing the lakes to protect the water.

But in 2010, the city sold all 7,000 acres of the land to the state, with both parties saying that the purpose of the transaction was to protect of the lands.

Last year, the state issued a draft plan for how it'll manage what's now known as the Hemlock-Canadice State Forest. But the plan included relatively vague language about oil and gas drilling on the property. City officials and the public were alarmed about the possibility of drilling occurring close to the lakes.

Environmentalists, in particular, worried that the plan would leave the areas under the forest's surface open to horizontal drilling and high-volume hydraulic fracturing.

The State Department of Environmental Conservation received more than 400 comments on the plan, most dealing with oil and gas drilling. City officials, too, urged the DEC to write gas and oil drilling prohibitions into the plan.

DEC spokespeople have said that the state has no intention of allowing drilling in the Hemlock-Canadice State Forest. And the management plan will reflect that, they've said. But the agency hasn't yet issued a revised plan.

As a backup, State Senator Ted O'Brien and the statewide Adirondack Mountain Club prepared legislation that would classify the Hemlock-Canadice forest as a unique area. The designation has stricter protections and includes prohibitions on gas and oil drilling. But the legislation has been shelved, pending the outcome of the DEC's process.

The state's environmental review of high-volume hydraulic fracturing is entering its sixth year. Ultimately, state officials will use the review's conclusions to decide whether to allow fracking in deep shale formations, particularly the Marcellus and Utica shales.

The last major public step in the review came in September 2012, when State Health Department Commissioner Dr. Nirav Shah began studying the public health impacts of fracking. His review was supposed to take a few weeks, but Shah still isn't finished, and now he's reportedly stepping down from his job.

Fracking is a deeply polarizing issue, but both opponents and supporters of the issue are frustrated with the pace of the review.

Landowners and drilling companies say New York is missing out on a potential economic boom. And they're suing the state in an attempt to force officials to make a decision.

Fracking opponents continue to press lawmakers to prohibit the extraction technique. They're concerned about potential for water and air pollution, along with community impacts and road damage from increased truck traffic.

Opponents also wonder where the massive quantities of water for fracking wells will come from, and how or where used fracking fluid will be treated and-or disposed.

Some communities have sought to protect themselves from drilling, should the state eventually allow fracking. They've put gas and oil extraction bans in place, and have successfully defended them against legal challenges.

For years, the state has offered tax credits to encourage cleanup and redevelopment of brownfields, which are former industrial properties with histories of contamination. But those tax credits are set to lapse in 2015.

It's up to the State Legislature to renew the program, but it hasn't acted yet.

Governor Andrew Cuomo offered a reform proposal and 10-year renewal provision in his 2014-15 budget proposal. But the final agreement between Cuomo and legislative leaders omitted the extension, and the reasons why aren't clear. Developers, legislators, and state environmentalists all say they want the program renewed.

Senator O'Brien, the top Democrat on the Senate's Environmental Conservation Committee, says he's disappointed that the tax credit wasn't extended. But the issue might be too complicated to resolve in budget negotiations, he says.

O'Brien says he hopes the Legislature renews the brownfield tax credit program before the session ends in June. And he says he's working on renewal legislation.

Cuomo says he wants to make the program more cost efficient, and his proposal included some changes in eligibility for brownfield tax credits. He wants the credits to go to economically stressed neighborhoods, high-priority economic development projects, and affordable housing.

But developers say that the program works well as it is and that it has been responsible for significant investment in New York communities.

There could be as many as 10,000 brownfields statewide. In Rochester, more than 100 brownfields have been identified in and around the Bull's Head neighborhood, and another 80 sites are in the 14621 ZIP code. Monroe County's suburbs have brownfields, too.

Environmental issues can be intricate, and the problems are often connected. As a result, environmentalists struggle with explaining these complex issues in ways that resonate with the public.

That's no small problem, since public support is necessary to spur action on issues such as climate change. And that involves convincing people that these issues affect their lives.

Environmentalists have succeeded in building public support on some issues, and fracking is a big one. Fracking opponents have stressed the extraction technique's potential to harm air, water, roads, and property values, and in doing so have hit a public interest sweet spot. That they link those problems to one identifiable, preventable source may help.

It's not as easy to explain to someone in Hamlin why taxpayer money should be used to encourage redevelopment of a former junkyard in the city, for example.

Some environmental groups have tried to seize on social media to get their message out. And it seems like a logical move, given the platforms' explosive growth. But social media has pitfalls. The Sierra Club's Regan says that too often users including environmentalists only interact or connect with like-minded people.

Regan says environmental groups and advocates need to try new approaches to win over the public. They need to look beyond feel-good events and discussions, he says, and reach people who don't already have the same mindset they do.

"If you're not changing everybody's mind, you've got to think of something else," Regan says. "Because what you're doing is not working."

RELATED STORIES:
Climate change: it's up to you
Earth Day Events