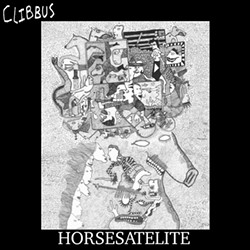 The Rochester-based rock trio Clibbus is back with another unconventional release that’s a buffet of avant-punk eccentricities. Self-released on June 4, “Horsesatelite” synthesizes the madness and disorientation so many of us have experienced during the pandemic.

Residing somewhere in the experimental and absurd realm of The Residents, Brainiac and early Devo, Clibbus was originally conceived by Alex “Beefus” D'Aurelio as his lo-fi solo moniker and multimedia project. After a few releases, it eventually grew into a trio in late 2018, when D’Aurelio enlisted bassist Graham “Lettuce Head” Balcomb and drummer Mike “Gourd Master” McGee.

Similar to the band’s first proper album together, 2019’s “Crowning for Dog,” its latest effort is another wacky but infectious trip down the rabbit hole. But “Horsesatelite” isn’t just about pitch-shift screams, tripped-out effects, and ferocious riffs. It’s an unpretentious, imaginative, and raw portrait of Clibbus’s oddball virtuosity and craftsmanship.


Mixed and produced by Noah Almekinder (who has also worked with Aweful Kanawful and The Temptators), “Horsesatelite” is a frenetic and fearless album. The hypnotic “Exploding Child” is scattered with shots of distorted guitars, squeaky sound effects, and gonzo lyrics, while “Telephone From Marble Mouth” scorches its way through early-Ween weirdness.


The pounding rhythms and splintering guitars on “Lamp Lips (Not So Bright)” convey the anxiety within Clibbus’s soundscapes. The album’s unapologetic strangeness continues with the jittery “Last Day for Screw” and the single “Haha, Table, Hahahaha Money.” But Clibbus offers a more chilled-out resolution on the closing track “I’m,” which matches D’Aurelio’s signature high-pitched vocal effects with keyboard chords and slow electronic beats.

Clibbus pushes boundaries on “Horsesatellite,” and its noisy chaos and punk-fueled rants are the latest invitation to the band’s playfully warped world.