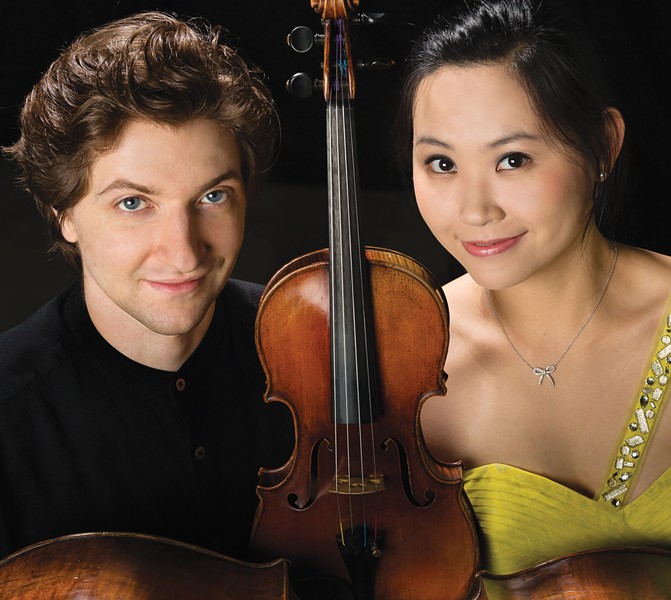 PHOTO PROVIDED Robin Scott and Ahrim Kim performed with another musical couple, Phil Ying and Keiko Ying, as part of the Society for Chamber Music's "A Couple of Couples" program.

The Society for Chamber Music in Rochester is always a source of imaginative and engaging programming. Its most recent concert, which took place Sunday afternoon, brought together two musical marriages: violinist Robin Scott of the Ying Quartet and cellist Ahrim Kim (principal cello of the Rochester Philharmonic Orchestra); and cellist Keiko Ying of Roberts Wesleyan College and the Eastman School, and violist Phil Ying of the Ying Quartet. They offered two string duos (of course), a trio, and an unusual string quartet — opportunities for these couples to perform together, but also demonstrations of other musical couplings: mentors and students; differing but compatible musical styles; and more.

Maurice Ravel's Sonata for Violin and Cello is certainly one of his most "modern" works, at least in part. Ravel biographer Roland-Manuel described it as "bristling with virtuosity and a lyricism which spits like an angry cat," and I can't top that description. Robin Scott and Ahrim Kim brought out this work's feline qualities, not just in the brusque, dissonant chords and pizzicati of the second movement (where Ravel makes two instruments sound like four or perhaps six), but also in the reposeful melodies of the slow movement.

Paul Wiancko's "American Haiku" is brand-new by classical music standards, having been premiered in 2014, but it has already been frequently performed — it deserves to be. The Japanese-American Wiancko, born in 1983, is at home in multiple musical styles, whether as a performer (he's a cellist who works with string quartets, rock bands, and Chick Corea) or as a composer. "American Haiku" is a three-movement duet for viola and cello whose brevity comfortably accommodates a number of musical echoes, from Japanese koto to Appalachian fiddling. All were handled with affection and aplomb by Keiko and Phil Ying. I don't know if "haiku" refers to details of the piece's construction, but it is engagingly haiku-like in its color and concision.

If Ravel's sonata was an apéritif with a dash or two of bitters, Jean Francaix's String Trio (violin, viola, and cello) is more of a citron pressé: sweet, tart, and tasty. The young Francaix (1912-1997) was a musical prodigy mentored by Ravel, and the older master's hand is evident, as is the fact that the young Francaix was a master, too — he was in his early 20's when he wrote this. The music has a lighter-than-air aspect and seems to be over almost before it begins, but it is built like a steel girder, and is quite a virtuosic workout. Scott, Kim, and Phil Ying's somewhat deadpan (and definitely virtuosic) approach to this work worked like a charm.

The four musicians joined forces for a marvelous reading of Anton Arensky's Second Quartet, in its version for violin, viola, and two cellos. (This late-Romantic Russian composer also wrote it as a "normal" quartet with two violins and one cello.) Arensky was a colleague and great friend of Tchaikovsky, and this 1894 work is an elaborate memorial to that great Russian composer, who died suddenly the year before.

In it, Arensky draws on Russian chant, a theme from the Requiem mass, a Russian folk song, and a theme of Tchaikovsky's own (subjected to some very attractive variations, the centerpiece of the quartet). Not to mention that Arensky's original melodies have a suave, Tchaikovskian cast — even the writing for the single violinist recalls that in Tchaikovsky's concerto. They all work together very convincingly: Arensky is generally thought of as a minor composer, but this quartet, with its somber string coloring and its unusual structure — a long first movement, a longer second movement, and a brief finale — is something sweet and special.

I understand this is a piece string players love to play, particularly cellists (as Phil Ying remarked in the pre-concert presentation, string players can't play the Schubert Quintet with two cellos all the time). This group's elegant, energetic performance definitely gave that impression, from top to bottom. Arensky's scoring of the two cellos is never heavy or thick, and gave opportunities for Ahrim Kim and Keiko Ying to highlight their very distinctive sounds delightfully.