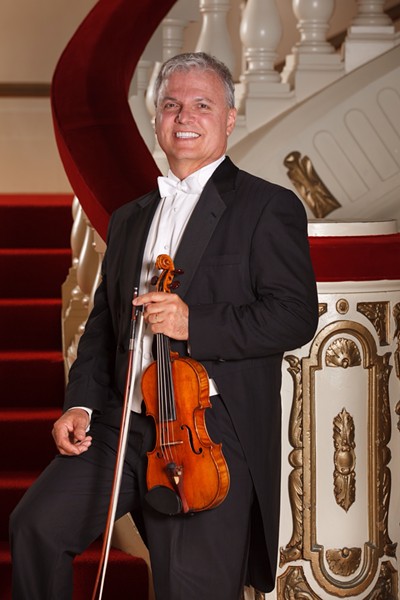 PHOTO PROVIDED Soloist David Halen performs with the RPO on its "The Music of Swan Lake" program.

With David Halen and Barbara Allen

In Thursday's concert of mostly ballet music at Kodak Hall, the Rochester Philharmonic Orchestra showed flashes of pure brilliance. Unfortunately, the performance as a whole was lackluster.

The RPO opened the program with a trio of AntonínDvořák's "Slavonic Dances," and was joined onstage by members of the Rochester City Ballet. Stare conducted with a light and graceful hand, and the orchestra responded with a provincial charm that was fitting.

If the first dance seemed to depict a celebration of village folk, the second was decidedly more aristocratic, with grander gestures and more elongated lines from the dancers. Musically, it was Stare's command of dynamics that gave the music its poignancy, in a way that, at times, transcended the mere pleasantness of the music and choreography. The conductor's sudden swells to forte were emphatic without losing fluidity. In the final dance, No. 8, the choreography best synced with the orchestra, and the playful, airy sensibility of the movements matched the freeing quality of the music.

The idyllic beauty of the "Slavonic Dances" quickly dissipated into the ether within the first phrase of BélaBartók's "The Miraculous Mandarin Suite." Disquiet and tension pervaded, as strings swirled menacingly and Kenneth Grant's slippery clarinet solo lent an added air of danger.

The noise and squalor of the cityscape evoked was akin to EdgardVarèse. Bartók's music here provokes the listener even as it forbids, with an exoticism that suggests either the title character, the listener, or both are out of place.

The expressionistic score -- with its angular melodies and incisive bursts of emotion -- is all about setting a mood that's alluring, even as it promises both thematic and musical violence. Orchestral unity, as well as an exacting, almost surgical approach to articulation, is critical here in order to convey the sheer viscerality of Bartók's composition. Stare and the RPO did not disappoint. They showed that, more than 90 years after its premiere, "The Miraculous Mandarin" still has the power to shock and to awe.

For all the electricity of the Bartók piece, "Violin Suite from 'Swan Lake and Sleeping Beauty'" -- which includes some of Tchaikovsky's most beloved music -- took the thunder out of the program. That's not to say that the elements for an evocative performance were absent.

While concisely arranged by Stare and violin soloist David Halen, the eight-part suite was still at least two movements too long. Halen, who serves as Concertmaster of the Saint Louis Symphony, had a lovely tone, even if it was thin at times. He played with a light, nimble touch, and his legato phrasing was stunning.

Halen was more than sufficient as a soloist, and yet his chemistry with the orchestra was nonexistent. Their rapport felt rigid and lacking in expressive freedom. The results were underwhelming, but mitigated by the presence of Barbara Allen, Principal Harp for the American Ballet Theatre Orchestra in New York City. Her playing was magical and lush, with a rounded timbre that somehow sounded like the essence of water.

The concert concluded with a well-executed interpretation of Maurice Ravel's elegant, yet ultimately dystopian "La Valse." Although the RPO's dance-themed program was inconsistent, it's worthwhile just to hear the orchestra's inspired take on Bartók's "The Miraculous Mandarin Suite."