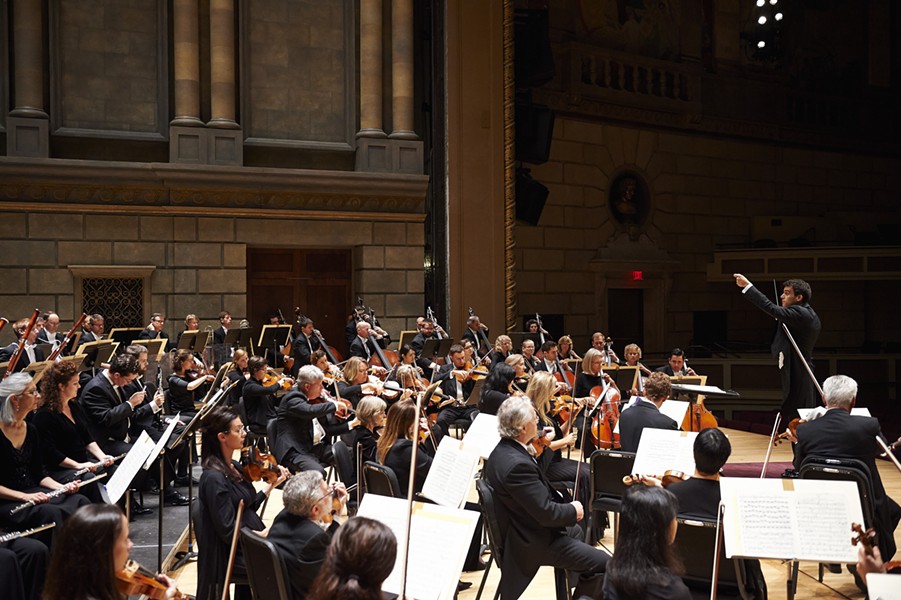 Music Director Ward Stare and the Rochester Philharmonic Orchestra are embarking on their second full season together, and based on Thursday night's opening concert, the excitement will continue. The RPO opened with an American rarity, before segueing into two pillars of the concerto and symphonic repertoire, all exceedingly well performed.

If you ever wondered if pianist Jon Nakamatsu was really beloved by the RPO audience, his reception last night -- a long, loud standing ovation -- left no doubts. He deserved it, too, after a performance of Rachmaninoff's Second Piano Concerto in which he hardly broke a sweat.

I admit I think of this piece as a hyper-Romantic knucklebuster, but neither pianist nor conductor seemed to approach it that way at all, often to the music's benefit. Rachmaninoff's big tunes and pianistic virtuosic passages were effective but never overstated. The opening moderato, taken very moderately, even struck me as a bit drawn-out and dull. This approach may lack edge-of-your-seat thrills, but it provided some refined musical pleasures.

The performance was remarkable for its delicacy and integration of the piano and the orchestra. Last season, Stare led socko performances of Rachmaninoff's Symphonic Dances and "Rhapsody on a Theme of Paganini," and this was much more than an accompaniment: all kinds of interesting orchestral details stood out, including a number of brief but beautiful solos for flute, horn, and English horn.

Nakamatsu played his encore -- Chopin's Fantasy-Impromptu, of "I'm Always Chasing Rainbows" fame -- with charm and gentle emotion, saying as much in this five-minute piece as he did in the Rachmaninoff.

When I interviewed Nakamatsu a couple of weeks ago, he remarked that he was playing the Rachmaninoff concerto in part because a season opening concert required "a blockbuster." That word applies even more strongly to Beethoven's Seventh Symphony, the second half of this week's concert.

Stare must have made a strong impression when he led the RPO in this symphony in July 2013 -- after all, they hired him. I didn't hear that program, but I am glad I heard last night's, a near-ideal performance of a tremendous work.

This may be the most modern-sounding of Beethoven's symphonies; it's certainly the most muscular. Wagner famously called it "the apotheosis of the dance," and its relentless rhythmic drive and reliance on repetition make it sound quite unlike any symphony of that era, even occasionally touching on minimalist territory. If a performance of the Seventh is too driven, the piece is exhausting, but if it is well done, it is one of the most exhilarating and life-affirming symphonies in the repertory.

Stare's tempos were on the quick side, but well-integrated and judiciously paced. The RPO strings produced a powerful, impactful sound, rich but focused, as a basis for the woodwinds and brass (including outstanding work from the solo oboe and the horns -- and a nod to the timpani, who get a workout in this symphony).

And while three movements of this symphony are whirlwinds of sound, the second movement (still not really a slow movement) is a serious moment of repose. Conductor and orchestra judged its emotional content to a T, in a poised, dignified performance.

This program opened with a work the RPO had never performed, although it was recorded in the 1950's by Howard Hanson and the Eastman-Rochester Orchestra: Ron Nelson's 1955 work "Savannah River Holiday." It's a lighthearted American concert overture that should be heard more often; this Eastman alum produced a rousing, colorful piece in the mid-century Americana vein of Copland, Morton Gould, and Hanson himself (it sounds like Nelson kept a copy of Hanson's "Merry Mount" nearby while writing it). Stare and the orchestra played it with excellent style -- and its nonstop energy made it a surprisingly good foil to the Beethoven Seventh.