In the spirit of giving, we took on the arduous task of sampling dozens of local beers to bring you the 24 that best complement the season. Think of it as our gift to you. We get nothing out of it — hiccup — other than — hiccup — bringing you joy.

This list is a jolly collection of the best of the best in local ale, from mild fruited sours to high-octane barrel-aged monstrosities. We love all of them, and think you will too.

You may be wondering why this New England staple stout made our calendar. This lovely diner black coffee-accented brew is made right here in the Flower City. (Non-disclosure agreements be damned!) Light drinking and blunt on the roast notes, this is a fitting alternative to your regular morning brew.

Does God want goodness or the choice of goodness? Who cares? You don’t have to quander moral imperatives while drinking this liberally-hopped Citra/Azacca brew laced with notes of sweet orange. It’s good, and no amount of the ol’ ultraviolence can change my mind.

There’s nothing subtle about this offering. This 10.5-percent monstrosity barrages the palate with notes of melon, pine, and citrus zest. Deceptively smooth yet complex, this beer’s contradictions can easily lead a drinker to the mountains of madness.

If you’ve ever run into that 6-foot-8-inch dude at the punk show who locks you in a big, sweaty hug 10 minutes after he threw you into a cinder block wall, you know what this beer is about. It’s an assault on the senses, exploding with notes of roast, bourbon, vanilla, white cake, and a well-placed burn. Subtlety is not the game here.

This beer is Genesee’s first so-called “Brewers’ Series” concoction. That means Genesee's beer makers pumped out what is a traditionally small-batch "craft beer" from the brewery's massive vessels.  It’s a time-machine to 2012, when imperial stouts were not merely avenues for making brownie batter into drinkable liquid, but wildly-skilled beers laced with notes of dark chocolate, licorice, and coffee.

This beer with an in-no-way-trademark-infringing name is meant to emulate a Jolly Rancher — and it does so quite well. A subdued sweetness accentuates tart notes and artificial watermelon flavoring, making for a drinkable candy concoction.

They say brevity is the soul of wit. That goes for beer too. This is a pilsner made by Young Lion Brewing Company in Canandaigua, is called “Pilsner, and it is exactly what you’d expect: crisp, clean, and well-balanced with just the right amount of herbal hop bite.

A good Schwarzbier should shine when the leaves have fallen and the sky is gray. It just so happens that we sampled this beer on just such a day, and it lives up to the style’s archetype. It’s roasty, mild, easy-drinking, and clean while maintaining a robust base of blackened malt and bitter finishing hops.

This rotating mix of smoothie sour ales is an exercise in excess from the brewing provocateurs at Fifth Frame. This version bursts with tart notes of passionfruit, juxtaposed by sweet, nearly savory notes of coconut that linger on the palate. This series eschews restraint while managing surprisingly complementary and nuanced concoctions.

The concept of grape pie is hyper-regional, largely confined to the Finger Lakes. Now we've got a beer based on grape pie? Somehow, it works. The beer ripples with sweet waves of fresh grape and lacings of cinnamon and spice, all on top of a pronounced, tart backdrop.

Aurora has made a name for itself by producing some of the most remarkably juicy IPAs in the Finger Lakes. But “Super Crisp AF,” as the name implies, is a departure. It is bitter, bursting with dry notes of tropical fruit and resinous pine, and finishing abrupt and clean. An east-west collision beer for this global generation.

This Geneva brewery makes beers to match its sharply illustrated and wildly inventive can designs. This simple pale ale is laced with subtle floral notes punctuated by a strong, pithy bitterness and a mild, sweet malt backbone. Pleasant, restrained, and brimming with character.

Beer nerds know this beer needs no introduction. Prison City was on the vanguard of the New England IPA explosion, and “Mass Riot” is its opus. This liberally-hopped brew is riddled with piney, resinous notes that meld with sweet, juicy tones. Find hefty notes of grapefruit and lime zest amid the chaos.

A hearty dose of chicory complements the robust coffee heart and soul of this easy-drinking stout. Not quite bone-dry, its mild sweetness perfectly juxtaposes the tones of roast and herbal hop bitterness. A simple adjunct stout that is greater than the sum of its parts. 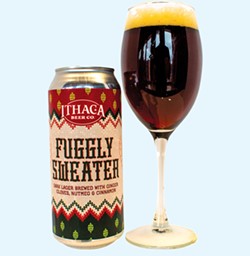 A culinary hill I’ll die on is that many traditional “dessert” spices, particularly cloves, are actually just underused in western savory dishes. The good people at Ithaca Brewing get me. This beer is dry and sessionable, with a modest brown ale composition serving as a venue for the humble clove.

This beer is a flagship for K2, and perhaps the most distinctive beer the brewery has ever put out. It’s not that it’s particularly weird — in the past, K2 has pumped out beers imbued with bacon, cakes, and every candy under the sun. But it is memorable. This is a classic, mildly sweet cream ale laced with vegetal tones of peppers and has a pleasantly warm finish.

Dec. 18
“Tables on Tables”
Other Half Brewing Company
IPA

The Bills play the Dolphins on this day, and you know what that means: time to get absolutely blasted, yell about how much Florida sucks, and divebomb yourself through a folding table. This beer may be the fuel for the fire. A straightforward juicy IPA with just a touch of tropical goodness, and endless shotgunning potential.

I’m generally not a fan of winter ales. It’s a confused beer, unsure whether it wants to take the dive into higher alcohol territory or hold fruitlessly onto a notion of being “sessionable.” What you usually end up with is a muddled, overly malty mess. What “Kacey’s Christmas Ale” does differently, is lean into its malty character by accenting with well-placed notes of spice and cherry. It’s a standout representation of a lackluster style.

This rotating sour series strives to pack plenty of punch into a small package. At a modest 4 percent, this simple sour base serves as a perfect palette for conveying straightforward fruit flavors. Notes of sweet cherry and Country Time lemonade emanate through this brew, ending smooth, clean, and fresh.

The introduction of Mosaic Hops marked a sea change for beer when they first hit the scene back in 2012. Its distinctively tropical character became the must-have of every fledgling brewer in the market. And in turn, you got a lot of mediocre IPAs made by people who didn’t know how to use it to its full potential. The people at Noble Shepherd do, and they show us with this delightfully complex, challenging beer.

The hallmark of a good, traditional Hefeweizen is notes of banana and clove on the finish. This offering from Peacemaker is diligent in propping up that yeast character against a masterfully brewed wheat ale. It’s everything a good Hefeweizen should be: not too fussy, but brimming with flavor and nuance.

Despite what the name implies, I’ve never found this Swiftwater classic to be all that soft and fluffy. What I do see is a great IPA with a strong, pronounced bite, juxtaposed by gentle fruit notes.

This is it. The classic. A Rochester original. A blessing and a blight all in one. It’s a slightly sweetened ale dosed with corn. It’s $6 per six-pack, drinks as smooth as anything out there, and makes being interrogated by your extended family why you haven’t gotten married yet just a bit easier. Merry Christmas!