Monroe County is about as diverse a community as you can find: a mid-size city, rural areas with orchards and farm markets, suburbs with 20th-century tract houses and shopping malls, and quaint, Victorian villages. The Genesee River and the Erie Canal bisect the county, more or less vertically and diagonally, so geology and history are a constant presence, shaping everything from traffic patterns to architecture and public festivals.

The county is literally a community of dozens of communities: 19 towns, nine villages, a combo town-village, and the City of Rochester (which has its own numerous, defined neighborhoods). Given the number, there might be a good bit of similarity among all these, but each has its own distinct identity. Some draw it from their heritage, others from their location and their surroundings (parks, universities, manufacturing plants, farmland). And to many of the residents, the individuality of their particular hometown or neighborhood is a source of fierce pride.

You can get a taste of the diversity by sampling six of the local communities, from the bustling urban Monroe Avenue neighborhood to the bucolic suburb of Hilton. Additional community profiles, created for previous years' Annual Manuals, are in the archives on rochestercitynewspaper.com.

Modern-day Hilton is a village of about 6,200 people located within the Town of Parma, on Monroe County's northwest side. Some of its streets are lined with well-kept older homes, but it also has pockets of newer homes.

Hilton's downtown core has an array of small businesses, including restaurants, salons, a hardware store, a bookstore, and a yarn shop. A few manufacturing businesses have also set up shop in the village.

But a lot of Hilton's heritage has to do with apples.

The village developed in a location that was once dominated by orchards. While area men spent their days in the fields surrounding Hilton, many women worked in the canning factories that sprouted up in the village, says Hilton Mayor Joe Lee. Eventually, Hilton's agricultural industry diversified a bit and grew to include peach orchards and a pickle factory, Lee says. Some of the old canning buildings and processing plants have been repurposed by modern industries.

Each year, the village gives a nod to its agricultural heritage via the Hilton Apple Fest. The event started in 1981, and its second year was marked by an attempt to bake the world's largest apple pie. (The 18-foot, 10-ton dessert just missed the mark.) The fest remains a high-profile event that draws tens of thousands of visitors each year. This year, the event will be held October 4-5. — JM

Restrained growth allows this wealthy community to hold on to its rural charms. 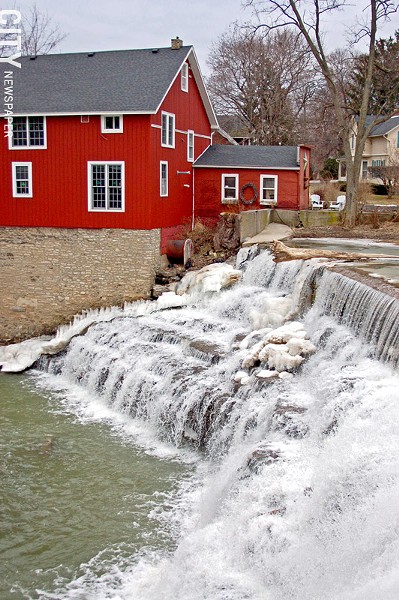 The town of Mendon may be a little more built up than it used to be, but it's still one of the more rural suburbs on Monroe County's east side.

The town is a residential suburb, and it is one of the wealthier communities in Monroe County. It is home to relatively few large subdivisions, and the house clusters it does have are not densely packed. Many of Mendon's houses are located on large lots.

In the past decade or so, Mendon's population has grown from 8,370 to approximately 9,130, according to figures from the U.S. Census Bureau. That's not a huge jump, and its population is still dwarfed by neighboring Pittsford.

But the town's restrained growth means that it has been able to hold on to its rural character. The town's main roads are lined by crop fields, pastures, stables, and barns. And in the Village of Honeoye Falls, which is located within Mendon's borders, historic mill buildings still stand. The waters of Honeoye Creek flow through the southwest corner of the town and the center of the village; they provided the power for the community's early milling industry.

Mendon has also retained significant natural lands, whether meadows or woodlots. And it is home to much of Mendon Ponds Park, the largest park in the Monroe County system. The park's trails are popular with hikers, cross-country skiers, and horseback riders. Its glacier-cut features earned it a spot on the National Register of Historic Places back in the late 1960's. — JM 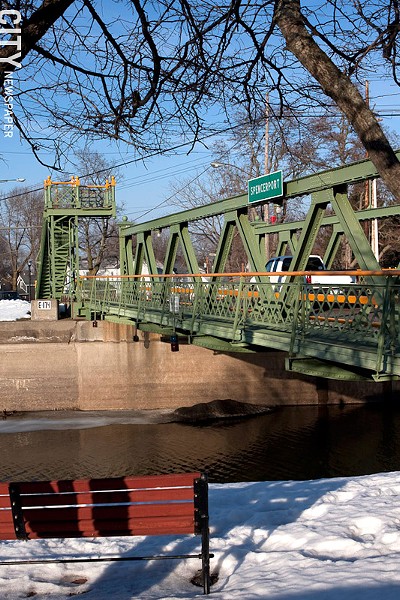 The Village of Spencerport and many farms can be found in this western suburb.

For the past 15 years or so, the Town of Ogden has been developing as a residential suburb — but it has happened slowly. New home construction picked up in the late 1990's and early 2000's, but has since slowed dramatically. Some businesses have moved into the town, too.

But Ogden's roots are in farming, and that tradition still lives on in the town. In Ogden, as much land is devoted to farming as it is to housing. And its active agriculture community includes a few farms that have been passed down through families for generations.

Last year, for the first time, Ogden was the location of the re-envisioned Monroe County Fair, now called the Monroe County Agricultural Festival. The festival mostly involved exhibits and livestock and crop competitions. The event takes place again this year from July 31 to August 3 at Northampton Park. The 973-acre park is located in the northwest part of the town, and also includes Springdale Farm, an agricultural education facility owned by the Monroe County and operated by Heritage Christian Services.

While farming shaped much of Ogden's history, so did the Erie Canal, which cuts through the north part of town. The Village of Spencerport, which is entirely within Ogden's borders, developed because of the commercial opportunities brought by the canal. In the days of mules and packet boats, the village was a day's journey from Rochester.

Another symbol of the canal era stands in Ogden: the Adams Basin Inn, which now operates as a bed and breakfast, provided accommodations for canal travelers. The building's tavern room, say the proprietors, has changed little since the canal was completed. — JM

Monroe Avenue in the city

A mix of commercial and residential defines this energetic city corridor.

Monroe Avenue is a commercial and residential corridor and one of the primary gateways into the city. The city portion starts downtown, runs parallel to Park Avenue, and continues past Cobbs Hill Park, through Brighton, and out to Pittsford. It has long been a destination for shopping and evening entertainment, with numerous bars and restaurants.

The city's Monroe Avenue sector has its share of challenges. One of the most apparent: because of its bars and clubs, it attracts different crowds at night than it does during the day, and the uses don't always complement each other. And retail is scattered in small clusters along the avenue: the street itself is more a series of commercial villages instead of one neighborhood.

Still, Monroe retains its eclectic, youthful vibe. Boutique shops Archimage and Aaron's Alley have been drawing people to the city for years, and the Avenue Pub is one of Rochester's oldest gay establishments.

The area also boasts interesting landmarks, continuing to serve the community with new uses. The building housing the Genesee Center for the Arts and Education was built in the early 1900's as a firehouse, and the Art Deco Monroe Square building, once a Sears store, now houses offices. – CF

A former industrial district is transforming into dense residential and retail uses.

Once home to the industries of the 19th century, such as the garment and textile industries, the buildings near St. Paul and Andrews streets stand like monuments to a lost era. Many of the buildings have found new life as residential housing, restaurants, retail, and nightlife venues.

Several buildings have been remade into lofts and spacious apartments with high ceilings, wood floors, and spectacular views of the city and the Genesee River. The building that houses the H.H. Warner lofts, for example, with Romanesque and Gothic styling, offers luxury living in the heart of downtown.

But the Quarter also has a busy and sometimes controversial late-night club scene, drawing complaints about excessive noise and disruptive behavior by patrons. Still, the Quarter has a lot going for it, including the fact that it's within walking distance of Eastman Theatre and the East End entertainment district.

The Quarter, with its unique character and old-Rochester charm, likely has a future as colorful as its past. — CF

A historic, UR-adjacent neighborhood in transition. 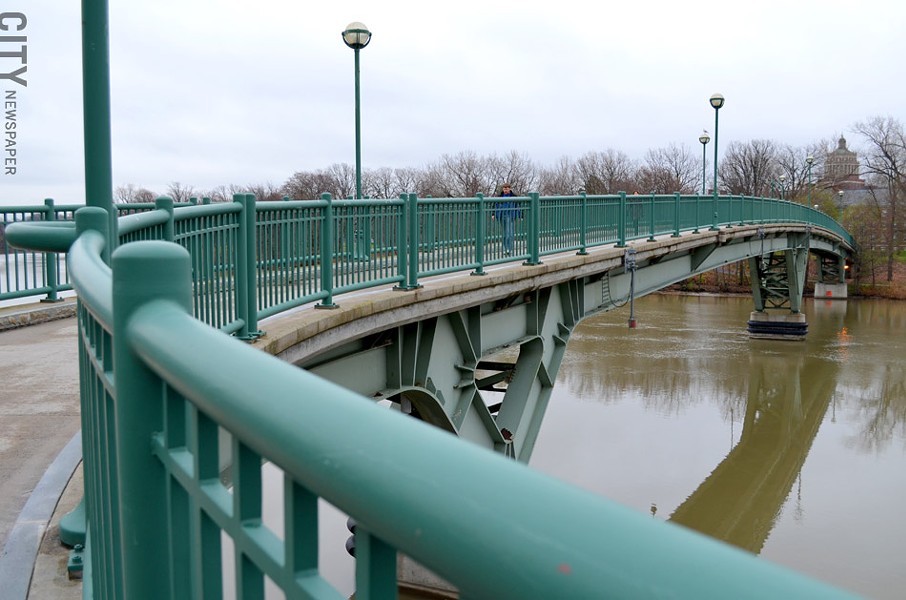 The 19th Ward in southwest Rochester is a diverse neighborhood with rich natural assets and a long history of social activism.

The city's largest neighborhood, it is bordered by the Genesee River and includes the Frederick Law Olmsted-designed Genesee Valley Park and the Erie Canal.

The neighborhood is heavily residential, and most houses have hardwood floors, natural wood trim, leaded or stained-glass windows, and open porches.

The long-in-the-making Brooks Landing project at the corner of Brooks Avenue and Genesee Street includes Staybridge Suites, an extended-stay hotel; a Boulder coffee shop, and a Subway restaurant. Additions to the project are planned, including a student-housing component.

A pedestrian bridge links Brooks Landing to the University of Rochester's River Campus, and it has been driving an increasing number of students into the neighborhood. There are the usual friction points between residents and the students, but both sides are working hard to resolve those, says LaShay Harris, president of the 19th Ward Community Association.

"I think having students in the neighborhood is a good thing," she says.

Approximately 22,000 people call the 19th Ward home, and it is an area in transition, Harris adds. While the neighborhood has strong housing stock, devoted residents, and walkable neighborhoods, the area struggles with some public-safety issues, she says, including open-air drug markets.

A national leader in pushing to preserve its neighborhood as a dynamic, racially integrated one, the community association has a strong schools committee, which for years has been involved in school reform and improvement activities.— CF