October 22, 2019
The height of the political campaign season is upon us and candidate endorsements abound. They’re everywhere. On lawn signs, in news releases, and at press conferences.

But don’t look for them in the pages of CITY. Count CITY among the growing number of newspapers that have gotten out of the political endorsement game.

Newspapers, including this one, have a long history of endorsing political candidates, from those seeking the highest office in the land to those looking to become their town’s next dog catcher. 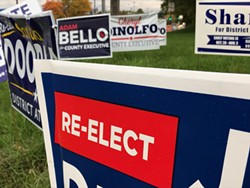 The number of them offering endorsements, though, has declined precipitously for good reasons.

The harshest critics of the practice view political endorsements as either an attempt by a newspaper to sway an election or dictate to the reader what they ought to do at the polls.

The Wall Street Journal, which stopped endorsing after it embarrassingly gave the nod to Herbert Hoover in the 1928 presidential election, declaring him “the soundest proposition for those with a financial stake in the country,” used to clarify its position every election cycle.

Its stated stance in 1972 was stark: “We don’t think our business is telling people how to vote.”

Newspapers have long helped shape civic dialogue, and the feeling in many newsrooms is that newspapers have an obligation to share their collective wisdom on elections with readers.

That somewhat presumptuous thinking persists at newspapers, specifically among editorial writers who author endorsements, because they have spent so much more time than the average reader exploring issues and interviewing candidates.

Who better than them to opine on which candidate would make the best dog catcher?

The idea that newspaper endorsements can help readers cut through the noise, especially in local races that get less media attention than national or statewide contests, carries some weight.

As the Columbia Journalism Review wrote in 2017 advocating for endorsements, “Few Americans may clip out endorsements from the paper to bring to the polls, but for down-ballot races, there are simply no other media willing to interrogate potential property appraisers for 90 minutes.”

The reality is, though, that fewer and fewer readers are listening nowadays. The 2016 presidential election, in which newspaper endorsements for Hillary Clinton outnumbered those for Donald Trump by a margin of nearly 20-to-1, was proof enough of that.

A pair of studies from 2008 offered more quantitative evidence.

That year, a Pew Research Center study found that 7 in 10 Americans said their local newspaper’s endorsement had no impact on their vote for president.

Another study, by the National Bureau of Economic Research, was more troubling. The study suggested endorsements have a nominal impact because readers consider the endorsement’s credibility through the lens in which they view the bias of the newspaper.

Therein lies the problem. Choosing sides in an election undermines for too many people the idea that a newspaper is an honest broker of facts and informed opinion.

CITY recently published thorough pieces on the Monroe County executive and district attorney races. They offered tremendous detail on the candidates’ platforms, backgrounds, and beliefs that were derived from extensive interviews with the candidates and independent research.

Now think about how those pieces would be viewed in light of CITY telling readers who it would like to see win those races.

A better approach during campaign season is to thoughtfully report on and analyze individual issues and policies. Readers need to be informed. CITY can help in that regard.

If that influences readers to vote one way or another, so be it.