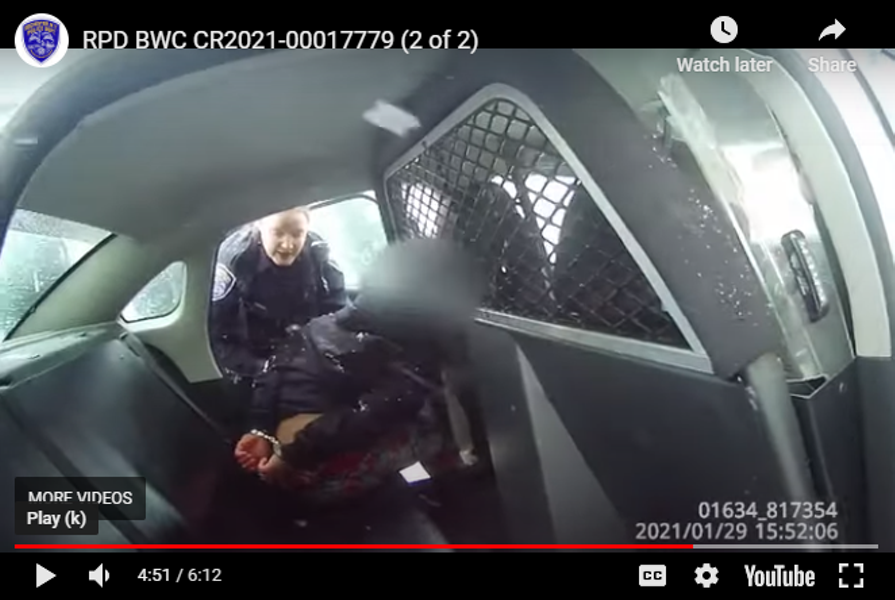 A screen grab from a Rochester Police Department body-worn camera that captured a female officer pepper-spraying a 9-year-old handcuffed girl.
EDITOR'S NOTE 2.2.21: This story has been updated from its original version to reflect that the city clarified the number of officers disciplined and the type of discipline from their initial statement on Feb. 1, 2021.

Three officers Rochester police officers involved in using pepper spray on a 9-year-old girl last week have been removed from their patrol duties effective immediately, the city announced in a news release Monday.

Mayor Lovely Warren ordered the officer's removal after meeting with Rochester Police Chief Cynthia Herriott-Sullivan, the release read. The discipline is to continue at least until an internal police investigation into the matter is concluded.

Notably absent from the release was the number of officers to be disciplined and the type of discipline they were to receive. The statement had said only that officers were being "suspended."

The city later issued a new statement clarifying that one officer was suspended with pay and two others were placed on paid administrative leave.  A city spokesperson explained that the suspension with pay was due to contractual obligations between the city and the police union.

At least two officers seemed to be linked to the incident, which took place on Avenue B on Friday afternoon, when police responded to the street for a call of "family trouble." Neither of the officers' names has been released.

Portions of video footage taken from two cameras worn by police who responded show the child handcuffed and screaming for her father while officers try to restrain her and put her inside a police vehicle.

"You're acting like a child," a male officer can be heard telling the girl.

After some grappling and trying to put the girl's feet inside the cruiser, a female officer told the girl, "I'm going to pepper-spray you, and I don't want to." The officer later said, "This is your last chance. Otherwise pepper spray is going in your eyeballs."

Thirty-six minutes later, as the sobbing girl continued screaming for her father, the male officer said, "Just spray her at this point."

In ordering the officers suspended, Warren issued a prepared statement saying she would ask state legislators to give executives of local governments more authority to quickly discipline officers.

“What happened Friday was simply horrible, and has rightly outraged, all of our community,” Warren said. “Unfortunately, state law and union contract prevents me from taking more immediate and serious action. I will lead the charge that these laws be changed as part of our response to the Governor’s Executive Order 203. And, we will be asking our state legislators to join me, and make numerous changes in Civil Service Law that would allow cities to more quickly issue discipline in cases like this one.”

The governor's executive order mandated that all municipalities submit plans to the state to reform policing.

"As a human, this incident is disturbing and as a father, it's heartbreaking—this isn't how the police should treat anyone, let alone a 9-year-old girl," Cuomo said, in a statement. "Across New York and around the country, the relationship between police and the communities they serve is clearly not working, which is why we launched a statewide effort to bring everyone to the table and make real, lasting reform."

The incident has prompted condemnation from the police chief, elected officials, and civil rights organizations alike, and intensified scrutiny on a police force that has been under a public microscope since news of the death of Daniel Prude at the hands of officers surfaced last September.

The suspensions were announced as a planned demonstration was getting under way on North Clinton Avenue. As of 5 p.m., there were roughly 150 protesters marching south toward downtown.

Felder drew ire from the crowd as he took the microphone, as demonstrators rallied against him over perceived inaction over the sexual harassment allegations against fellow legislator Ernest Flagler-Mitchell.

Flagler-Mitchell, who allegedly sent sexually explicit messages to a 19-year-old constituent, is currently the subject of two investigations; a criminal investigation by District Attorney Sandra Doorley's Office, and a second from the county's Board of Ethics.

"You have not said a word about it," organizer Stanley Martin said to Felder. "So when you're coming up to stand here, I want you to condemn that action."

After remarks, protesters moved up to the station, taking down the first set of barricades in the process, and rattling the gates outside the station's parking lot. The protest ultimately subsided peacefully shortly after 6:30 p.m., after RPD officers gave several orders to disperse.

Police did not deploy crowd control tactics, and only one officer, a negotiator, attempted to engage with the demonstrators.