City starts planning to remove more of the Inner Loop 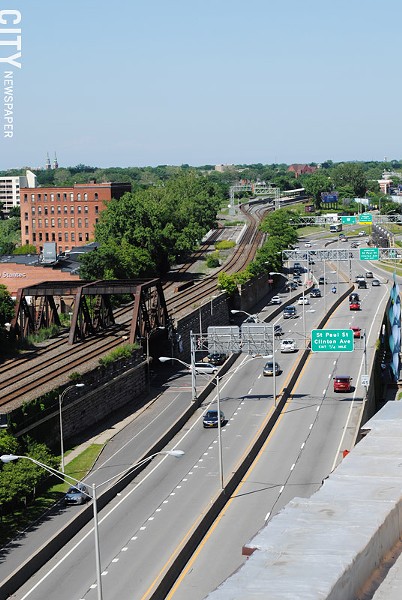 City officials took the first step this week toward removing the rest of the Inner Loop, a section of sunken expressway that runs through the northern edge of downtown Rochester. They issued a Request for Proposals for a company to study the highway, evaluate alternative possibilities for its removal, and recommend a new design.

The Warren administration wants to “convert some or all” of the remaining Inner Loop, from Charlotte Street westward to I-490, to a grade-level street "with significant acreage for redevelopment," the RFP says.

The eastern portion of the Loop was removed and brought up to surface level in 2017, and new development – apartments, commercial space, an expansion of the Strong Museum, and a hotel – is well underway. Now, the Warren administration wants to tackle the rest of the road. One reason is the potential to create more land for development. But city officials also say the Inner Loop has served as a moat that separates northeastern city neighborhoods from downtown Rochester. The administration wants to reconnect those neighborhoods with downtown.

Other goals are to restore “as much of the original street grid and parks as possible,” create new green spaces, and enhance the riverfront. Officials also hope removing the rest of the Loop will make it safer and easier for pedestrians, cyclists, and transit users to navigate that area of downtown.

The company the city chooses for the planning study will provide a broad range of services, including studying current traffic use on the Inner Loop, designing new streets, assessing development potential, and overseeing public engagement. The deadline for submitting proposals is August 16, but that’s the first step in what will likely be a long process. Officials say the study will probably be completed in the spring of 2021. The study will include a recommended replacement for the Inner Loop, but then the city will have to raise money to carry out that recommendation.