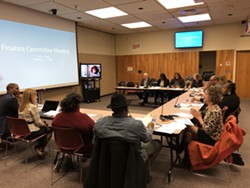 The Rochester City School District is looking at cutting dozens of teaching positions as the district grapples with a budget gap from the last school year and concerns that the current spending plan is not based on solid projections.

The Rochester School Board's Finance Committee on Tuesday night listened to Superintendent Terry Dade, who just came on board in July, explain why the district needs to take major steps to keep the current budget problems from getting any worse.

Board members learned in late September that the previous fiscal year ended with about a $30 million budget gap, when they had actually been told in May the spending plan was balanced.

At Tuesday night's meeting, Dade said that this year's spending plan contains assumptions about spending and revenues that aren't really accurate, and if the district did nothing about that in the current school year it could be facing a gap of more than $64 million.

To help deal with that issue, Dade got the finance committee to agree to move ahead with $28 million in reductions in various areas, including extended learning programs, and trying to negotiate a change in a proposed pay raise for teachers.

He also is proposing a 5 percent reduction in staff, which would mean the loss of about 168 teaching positions. Some of those cuts could happen through attrition or not filling vacancies, but there will be layoffs, Dade said. The staff cuts would affect a total of 287 positions, including administrators, teaching assistants and other jobs.

Even with these budget problems, the city school district must continue efforts to improve academic performance, Dade said.

"I was brought here for one job and that is to move the academic outcomes forward as a district. You will not hear me making any excuses for why we are lagging behind or the like; I have every bit of confidence that we'll just make adjustments as we move throughout this school year," Dade said.

Even with these planned cuts, more help will be needed, such as state aid, to get the school district budget back in good financial shape, Dade said.

But both Dade and School board president Van White said this won't stop the city school district from working to make progress academically.

The board and administrators have a big responsibility here, White said.

"So we're going to expect that there will be a continual increase in our graduation rate, a continual reduction in our out of school suspensions; a significant 5 to 10 percent increase in our ELA and math scores. Is that going to be difficult? Absolutely, but that's our job," White said.

Meanwhile the New York State Comptroller's Office continues an audit of the city school district's finances to see how the miscalculation about the prior fiscal year came about.