City School District discusses long and short term fixes for budget woes
CREDIT JAMES BROWN / WXXI NEWS
Update Required To play the media you will need to either update your browser to a recent version or update your Flash plugin.

The district has laid off hundreds over the last 18 months to bridge multiple budget deficits and sent pink slips to 221 more staffers last week.

To shrink an expected $59 million budget deficit at the end of the year, the district said it stopped all out of town travel, implemented a soft hiring freeze, and stopped using substitutes for vacant positions among other moves.

The district is focusing on financial and academic plans with state appointed monitor Shelley Jallow to fix long term problems. In an update earlier this month, she told the board that she wants a durable plan that the district sticks with.

“The terms of the goals that you set, and the strategies that you prioritize for how you gonna succeed at reaching those goals, should not change no matter who changes seats,” said Jallow.
She also said staffing, ballooning transportation costs and enrollment should be priorities. 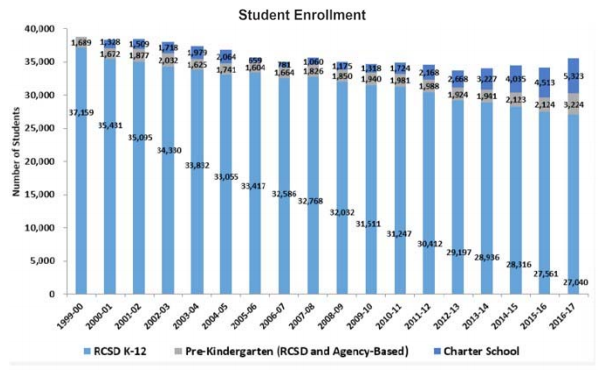 One of the biggest drains of district funding appears to have slowed for now. According to district data, the amount of students in charter schools has generally increased every year, but this year is an exception.

As of August, 200 fewer students enrolled in charter schools than projected by the city school district. New district chief financial officer Carleen Pierce said a small number of students could have a sizable impact on the district’s budget.

“We do have a positive variance within our charter school projection of 1.4 million dollars,” said Pierce. “This is something that we will have to keep our eyes on.”

Charter schools are public schools, so when a family opts to put their child into a charter, the money the city school district receives for the pupil goes to go to that school. The district is expecting to pay $89 million to charter schools this year.

Pierce cautioned that the numbers are not final and says she’ll have a better grasp on the district’s population by October.