City presents 'stew' of Inner Loop ideas, but residents aren't eating it up yet

As kids played basketball at the YMCA Center of Equity on a recent Wednesday, just a few feet way, adults worked on a project that could be crucial to their futures.

The Y sits on Lewis Street, a few blocks from the northern half of the Inner Loop, the C-shaped highway that has divided the city for six decades. The project being reviewed included several concepts the city is considering to get rid of the highway.

Maria Furgiuele, executive director of the Community Design Center of Rochester, was one of a few dozen people who stopped by to weigh in on the concepts. Her group focuses on placemaking, or helping residents understand design so they can chime in when the government or private sector proposes to build things. 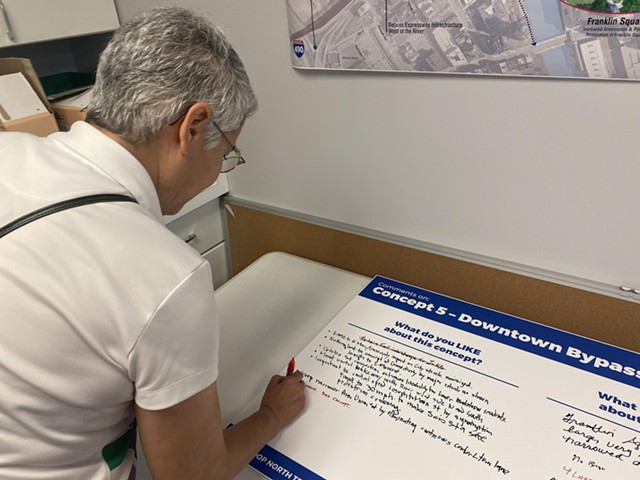 “Our main goal is to just help build community capacity so that they can be engaged in the design process,” said Furgiuele. “They are the experts of their neighborhoods, and they're the ones who should dictate how they want that neighborhood to look.”

And their input is needed urgently, if U.S. Sens. Kirsten Gillibrand and Chuck Schumer get their way.

Schumer and Gillibrand made a rare joint appearance in Rochester in late June to tout an apparent agreement on President Joe Biden’s $1.2 trillion infrastructure bill.

If passed, a chunk of that money — roughly $25 billion — would be carved out to fund projects like filling in the Inner Loop.

“I pledge to all of you. I will use my clout as majority leader to get this Inner Loop project funded,” Schumer said in a parking lot by the highway.

Gillibrand said the Inner Loop hampered the lives of nearby residents. 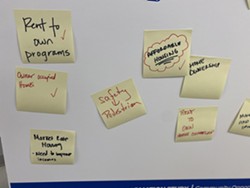 “For Black and brown communities or low-income communities, none of this infrastructure was built for them. It was built for everyone else. And so unfortunately, we now have this legacy that we have to unwind,” she continued.

Schumer was coy about how much money they’ll pursue, but he said it would be hundreds of millions of dollars. The city of Rochester told WXXI News in May that they’re seeking upward of $250 million.

“Once we get the money, guess who's going to be consulted and have a large say in how the project actually works? Not Washington, you,” Schumer told the crowd of about forty.

Making that happen begins in gatherings, like the one at the Y and similar meetings at the Genesee Brewery and RIT Center for Urban Entrepreneurship. And the responses have been mixed, as seen in a variety of comments in Sharpie and on Post-its underneath all the different concepts at the Center for Equity.

They wrote things like “restore original grid,” and “road to the city, not through the city." Martin Pedraza, a retiree who is very involved in the Scio Street neighborhood, agrees with those sentiments. He also sees something troubling in the designs: the size of the streets.

“Smaller streets, you know they're having them wide and then we'll have a turning lane. So that's three wide now,” Pedraza said.

Other people said they want to see more room for more single-family homes. Cheryl Shepard, whose son goes to the nearby World of Inquiry School, is in that camp.

“Homeownership and having homes available to families builds a sound foundation for children for generations to come,” said Shepard. 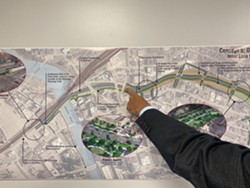 There are six design concepts on the table. Concepts one through five focus on managing traffic — building tunnels and roundabouts, funnelling cars through the city.

But concept six is a fan favorite. City Hall calls it “Grid Restoration.” That concept reconnects many of the streets that existed before the highway’s construction.

All of the ideas would develop the four communities near the highway in distinct ways.

In the Scio Street area, single-family housing is the goal for the land reclaimed by filling in the Inner Loop and the many empty lots in the neighborhood. Support for small businesses, homeownership and green space at the World of Inquiry School that could be accessed by the wider community are expected as well. Some of these ideas alter the intersection of University Avenue and Main Street, and expand nearby Anderson Park from a few benches to a larger green space.

Near Rochester’s train station and old post office, mixed-use two or three-story buildings is the goal. All the concepts call for redesigning and expanding nearby Schiller Park on Andrews and Franklin Street. The park was formerly known as Franklin Park, which was mostly removed when the Inner Loop was built.

Close to the Genesee Brewery and St. Paul district would be slightly larger mixed-use buildings, with a focus on workforce development for nearby businesses, entertainment facilities and riverfront access.

And near Frontier Field, they want even larger “high/medium density” mixed-use buildings. The questions in this area include how to accommodate riverfront and rail access, how to allow cars to access the area from the north and south and whether to keep access to Interstate 490. One option includes removing the ramp completely; others would modify it and keep the interstate exchange.

All of the ideas add green space everywhere, and most bring a large portion of the road to “grade” or street level. 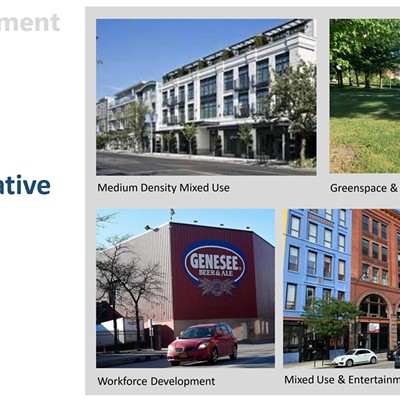 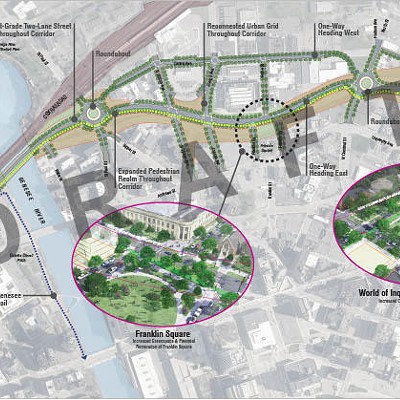 Inner Loop North concepts
Click to View 12 slides
The city of Rochester’s Norm Jones, who is quarterbacking the project, said the approach is shaped to please as many people as possible.

“That's our challenge,” said Jones, commissioner of the city's Department of Environmental Services. “We take all of the actual ideas, and we put it together and come up with a stew or a soup, something that's going to meet the needs of all of our communities.”