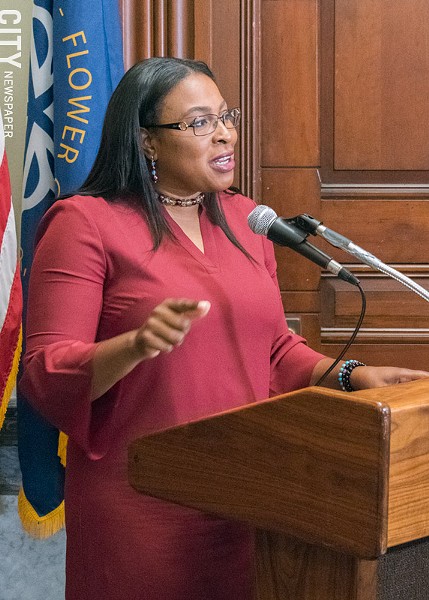 PHOTO BY RENÉE HEININGER During a press conference Friday, Mayor Lovely Warren said the city would fight a lawsuit from the Rochester School District, which is attempting to stop a November referendum on a temporary state takeover of the school district
The City of Rochester has lost its appeal to keep a referendum regarding the Rochester City School Board on the November ballot.

Earlier this year, City Council, acting at the request of Mayor Lovely Warren, passed a local law that would remove mention of the Rochester school board from the city charter and would put the change to a public vote.  Warren has wanted the state to take control of the school district for up to five years. The school board sued the city in an attempt to get the ballot measure struck down, and State Supreme Court Justice Scott Odorisi  ruled in its favor. Today, a panel of state Appellate Division judges upheld  Odorisi's decision.

Notably, the Appellate panel's decision says Odorisi correctly found that the referendum on the local law is "impermissibly advisory." A section of the local law "which conditions its effectiveness on subsequent action by the New York State Legislature, strips the referendum of any binding legal effect," says the decision.

The fact the four justices examined the facts and all came to the same conclusion should tell people that the board and the school district administration are complying with the law,  said board president Van White.

"There is an opportunity here to shift our focus away from litigation to what is happening in our classrooms," White said. "It's time to walk away from the political divisiveness."

Mayor Lovely A. Warren released the following statement on the ruling:


“Our children’s education remains the key to a better and stronger city. Today’s decision does not weaken my resolve to fix a broken system and provide our kids a fighting chance at life. We will continue to demand our state legislators act, and work locally to realize the Distinguished Educator’s plan throughout our school district. Through this work we will make sure the voices and ideas of parents, grandparents and students are heard. I am committed to working and finding common ground with all those willing to put the needs of our children first. Together, we can still deliver the change that builds better schools, a better city and a better community for all.”