PHOTO BY MAX SCHULTE Chrissy Alessi, a street outreach professional with Person Centered Housing Options, delivers lunch to Peace Village residents on a Thursday morning in September.
The gravel-covered ground of Peace Village, a city-sanctioned homeless encampment tucked away on a side street just west of Rochester’s downtown core, tells a story of crisis and neglect.

Cigarette butts, neon orange caps of hypodermic needles, food containers swarming with bees, and crushed prescription pill bottles are strewn across the makeshift village made up of prefabricated sheds and bare-bones wooden shelters.

The stale scent of mold and pungent odor of decaying trash hang in the air, wafting on the winds of passing trains. Even its location on Industrial Street, difficult to find if you don’t know exactly where you’re going, seems to tell a tale of what our society wants to see, and what it doesn’t.

But Peace Village, which was established in 2018 as the city razed a homeless encampment off South Avenue, is about to get some additional attention. The city has directed $250,000 in federal COVID relief funds to the nonprofit Person Centered Housing Options (PCHO) to ramp up the outreach work it has been doing at the settlement.

“This funding is really going to allow us to intentionally work with the folks, to engage with them,” said Nick Coulter, co-founder of PCHO. “If you’re not able to engage with a chronically homeless individual, the likelihood of being successful, building a relationship, and helping to get them out of that situation and, hopefully, into a better situation, is minimal.”

The nonprofit provides meals, orchestrates health care and addiction treatment, and helps with job applications, among other things, for residents of Peace Village, with an eye toward getting them into permanent, stable housing.

The legislation allocating the funding suggests that the city intends to work in tandem with Monroe County over the next three years to support PCHO’s work and determine the long-term viability of the nonprofit’s approach to ending homelessness. The county, however, has yet to pass a similar measure.

“Regardless of what’s going on, you are a human being and you deserve heat, a roof, running water, and a place to plug in a cell phone if you have to,” said Chrissy Alessi, a street outreach professional with PCHO. “I believe everyone deserves a roof over their heads. I believe housing is a human right.”

As of late September, 11 people were living at Peace Village.

A crisis in the making

On a sunny September morning, Alessi and fellow PCHO outreach professional Lisa Kuhman walked through the camp, meeting and greeting the residents as they waited for their lunchtime meals.

Many of the residents are in their 20s and 30s. Most arrived at the camp due to a confluence of issues, addiction and chronic mental health disorders chief among them. Some have fled abusive situations.

Alessi and Kuhman see the connection between addiction, mental health issues, and chronic homelessness as self-perpetuating.

“If they were dealing with chronic mental illness before, once they started experiencing homelessness, more than likely that mental health is going to become more severe the longer they’re out on the streets,” said Alessi, who lived in shelters at a point in her life.

“It’s the same with addiction,” she went on. “A lot of people think, ‘Well, they’re homeless because they’re addicted.’ But in reality, it’s often the other way around.”

PCHO tracked the circumstances that homeless clients faced over the past five years. Last year, the organization received $40,000 in city funding and served 68 people, 27 of whom were chronically homeless. More than half the people it served — 58 percent — were placed into stable housing, according to the organization.

Over the summer, House of Mercy closed down, which Kuhman and Alessi said left a gap in services for the homeless. Open Door Mission, another shelter, took in some of House of Mercy’s residents, but is now at capacity.

Rising housing costs have only exacerbated the demand for shelters. Fair market monthly rent for a one-bedroom apartment has climbed 28 percent — to $950 from $741 — in the Rochester metropolitan area since 2017, according to the federal Department of Housing and Urban Development. Average rent had only increased by 5.1 percent in the five years prior.

Rising housing costs present a challenge to PCHO in placing people into stable housing. Coulter said state and local governments need to work to lower inflation, or to increase wages to prevent a larger housing crisis. Chuck Albanese, co-founder of the organization, said it’s difficult to address any of a person’s other needs before addressing housing.

“If you can’t get the basic needs met—food, water, shelter—it’s very difficult for a person to self-actualize and move themselves out of that situation,” Albanese said.
For Kuhman, the resources needed on the ground are simpler.

“It’s just basic needs,” Kuhman said. “Food, clothing, furniture when they move into housing, cleaning supplies, paper products, all of the things that most of us take for granted are things they need, and there isn’t much help for people out there.”

A tale of two encampments

In another homeless encampment on Loomis Street off Joseph Avenue, Amy D’Amico holds Erica, a resident, in a prolonged embrace. Erica covers her mouth as she sobs.

Erica is preparing to go into treatment for heroin addiction, an issue that led her to Loomis Street. Erica’s boyfriend, Jacob, had also been living at the encampment until he died in August, leaving Erica alone among the tents and tarps of the grassy lot.

CITY is withholding the last names of Erica and Jacob to protect their privacy.

The following day, Erica headed to the Finger Lakes Area Counseling and Recovery Agency (FLACRA) for detox and rehabilitation. It wasn’t the first time she had gone to treatment, and D’Amico and her fellow volunteer, Gary Harding, understood it might not be her last.

D’Amico, a lawyer who formerly struggled with addiction and homelessness, knows well the difficulty of getting treatment to stick.

“Every time helped,” D’Amico said. “Even if it got me 24 or 48 hours, it helped me on that journey of believing that it was possible, believing that I could stop.”

All of the residents of Loomis Street — about a dozen people — are heroin users. Discarded needles surround a seldom-emptied hazardous waste bin that sits like an obelisk at the edge of the encampment.

All day, cars slowly circle the block, either dealing out heroin or picking up the women who make enough to feed their addiction through sex work, Harding and D’Amico said.

Loomis Street is an unsanctioned camp that its residents resurrected after it was razed last year by the city’s Department of Environmental Services following numerous complaints from neighbors. The city is set to clear it out again this year.

Nonprofits like PCHO no longer serve Loomis Street, deeming it too dangerous for its workers. In September, a resident was stabbed in his tent.

The discontent from neighbors is also obvious. The back door of a house on Joseph Avenue that faces the encampment bears a succinct message scrawled in spray paint: “You will be shot!”

D’Amico and Harding, the latter of whom served as the chief executive of Recovery All Ways until recently stepping down, are among the last advocates tending to Loomis Street. Their goals are to help guide people into treatment and to make sure the residents have access to food, water, and clothing.

D’Amico hopes the city will reconsider its plans to clear out the lot.

If the camp is cleared, D’Amico is worried its residents will take up shelter in abandoned buildings. She sees that as a dangerous scenario, both for the people at Loomis Street and for the volunteers trying to help them.

Some City Council members have expressed concern about what they say is a lack of a plan for residents of Loomis Street once the encampment is razed.

“How can we know how to respond if we don’t even know what the plan is?” asked City Councilmember Mary Lupien.

Harding and D'Amico see a disparity in the way the city is treating the two camps. One, Peace Village, is getting a quarter of a million dollars, while the other, Loomis Street, is getting torn down.

‘No such thing as homeless and lazy’

The money the city is directing to Peace Village is meant to fund two full-time outreach workers and to increase PCHO’s presence at the camp.

It's a plan that has been in the works for months. City Councilmember Mitch
Gruber was in talks with PCHO leading up to the bill’s introduction and approval in September. He sees the bill as a major step forward in addressing the needs of Rochester’s homeless population.

“The vision we have of the encampment is merely one part of a continuum of homeless services and outreach that we provide in this community,” Gruber said.

As of 2020, the most recently available data, the National Alliance to End Homelessness estimated 815 people were homeless on any given night in Monroe County, and that 96 of them were chronically homeless.

At Peace Village, Alessi and Kuhman see a fight for survival. One shed, half-covered in tarp, was partially burned by a resident trying to keep warm during the winter. Rats have nested in the knolls surrounding the encampment, feeding on the scraps left by the residents.

What the pair want for Peace Village are simple things that could go a long way. Regular trash pick up, a communal picnic table, a bolted-in park grill, and sanitary restroom facilities are top of mind. The only restroom at the site is a lone portable toilet, which Alessi said gets cleaned only when it becomes unusable. A hose attached to a cistern serves as the camp shower.

“This isn’t just some dump, these are human beings that live here,” Kuhman said. 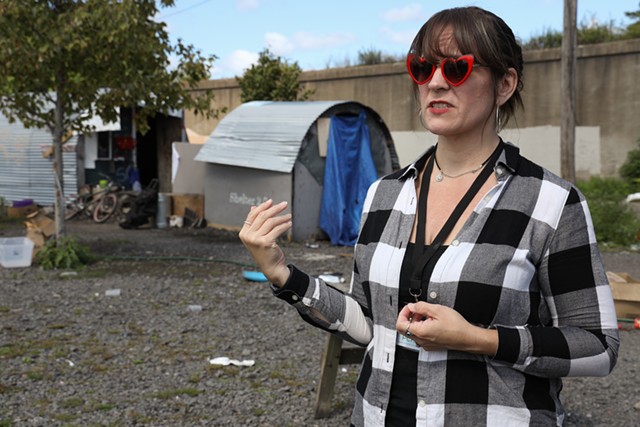 Alessi said chronically homeless people face barriers to everyday resources, such as transportation to job interviews and appointments, access to the internet to fill out applications, and obtaining things like birth certificates and other identifying documents.

“Something as simple as going to the dentist and getting your teeth done isn’t as simple for everyone,” Alessi said. “And that can cause people’s deaths.”

One resident died from an infected tooth after being unable to get treatment, Alessi said.

PCHO describes itself as a “housing first” organization, meaning their prime goal is getting a roof over someone’s head. Homelessness, they said, is a hard life, and one that exacerbates every other issue a person might be facing.

There also needs to be a societal shift in how the homeless are viewed, Alessi said. She pointed to the challenges faced by a homeless person in doing something as simple as washing their clothes.

“It’s such hard work to just survive in homelessness that when I hear people say, ‘Oh, all people are homeless because they’re lazy,’” she went on, shaking her head. “You can’t be homeless and lazy, it just doesn’t work like that. There’s no such thing as homeless and lazy.”