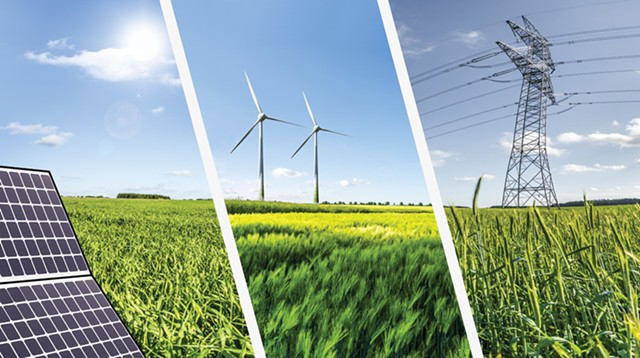 Starting Sept. 1, city of Rochester residents will get their electricity entirely from renewable sources unless they opt out of the initiative that’s enabling the shift.

This week, city officials announced the launch of Rochester Community Power, which is using the state’s community choice aggregation program to procure power from a supplier on behalf of the 80,000 residential, small business, and municipal electrical customers with Rochester Gas & Electric accounts. The idea behind community choice aggregation is to give communities leverage to lower energy costs and shift to cleaner sources of electricity.

“Community choice aggregation” is clunky to say and its concept difficult to process. But the bottom line of the program is this: residential and small commercial consumers might pay less or might pay more for their power in any given month, but 100 percent of it will be renewable electricity sourced from as close to Rochester as possible.

“I am very excited to see our community choice aggregation program reach the point where we can now show our residents how it can help them save and preserve the environment at the same time,” Mayor Lovely Warren said in a statement.

The city is sending out letters to households and businesses explaining how to opt out of the community choice aggregation program if they so choose.

The city and its partners selected Constellation, a national energy and energy solutions provider, as its power supplier and entered into a two-year contract with the company. Through the life of that contract, officials expect to reduce city-wide greenhouse gas emissions by more than 450,000 metric tons — the equivalent of the carbon that would be drawn out of the air by a forest 23 times the size of Rochester.

“This is a great example of a systemic climate solution,” said Abigail McHugh-Grifa, executive director of the Climate Solutions Accelerator of the Genesee-Finger Lakes Region, formerly the Rochester People’s Climate Coalition.

Soon after the state established the mechanism for aggregation in 2016, city officials said they were interested. But before officials would advance the initiative, however, they wanted to resolve a technical issue around a utility tax, which was a source of revenue for the city. That has since happened.

Rochester will be the largest city in New York to establish a community choice aggregation program. Several Monroe County towns are also in various stages of setting up their own community choice aggregation programs. Brighton, for example, has also contracted with Joule and Roctricity to handle aspects of the program, which offers town residents a 100 percent renewable electricity supply.

On May 26, Penfield officials selected Good Energy to administer the town’s new community choice aggregation program, which will pursue a clean and renewable energy supply for residents..

“Now we need all the other municipalities in the area to follow Rochester’s lead,” McHugh-Grifa said.