November 13, 2018
City officials are again trying to decide whether they need to cover the reservoirs at Highland and Cobbs Hill Parks, and they held the first of a series of public workshops on Highland on Monday night.

The reservoirs are a popular visual feature of both parks, but the water in them is part o 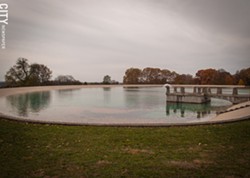 f the city’s public water supply. It comes from two of the Finger Lakes south of the city – Hemlock and Canadice – and it’s what Rochesterians drink and bathe in. Federal officials have strengthened requirements for protecting public water supplies, and the city has to show that its open reservoirs meet those standards despite their exposure to birds, leaves, and other potential contaminants.

Ten years ago, city officials considered covering both reservoirs, but after objections from the public, they considered treating the water with ultraviolet light instead. No action was taken, however, and last year officials hired a team of consultants to study Highland's reservoir again. The consultants came up with several different options, and city officials are now asking the public to give its opinion.

The options:
Tonight’s event is the first of three workshops on Highland planned between now and next spring. Environmental Services Commissioner Norman Jones will then give Mayor Lovely Warren his recommended alternative.