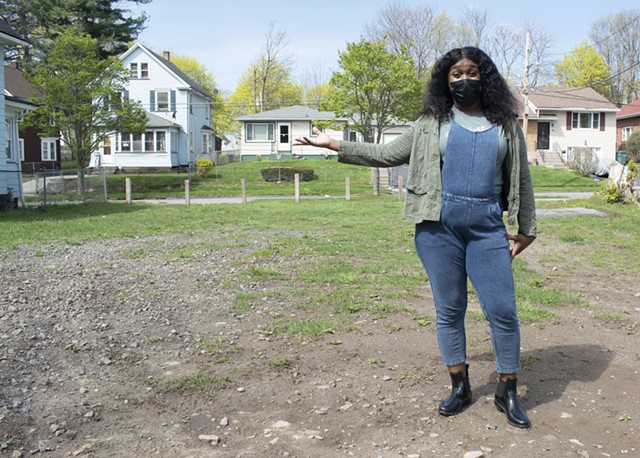 Where many in the Marketview Heights neighborhood saw problems with the vacant, city-owned lot at the corner of Forester and Mona streets, Ashley Smith saw promise.

The 6,700-square feet of nothing had sat idle for years, a monument to a broad lack of investment in the neighborhood. But Smith, a mother of three, envisioned a community garden that she believed would beautify the block, instill pride, and put healthy food on the tables of her neighbors.

“It’s just vacant and all it does is get mowed,” Smith said. “But there’s so much potential to have areas for children to read books and even go and do your homework. Just a safe space with flowers and gardens.”

But building a viable community garden takes more than a shovel and seeds. It takes seed money. While the city would allow Smith to begin gardening on the lot for a single-season, it would not grant her the long-term permit she needed to apply for a federal grant that would help her get her garden off the ground.

Current city policy limits the issuance of long-term permits — up to five years — to garden on city-owned land to nonprofit organizations that have been gardening for at least three years and can secure a $1 million insurance policy. The city has only given out two such permits.

As urban agriculture has expanded in Rochester, activists and growers have frequently run into obstacles imposed by city policies around community gardens and small-scale farms. Smith’s experience is just one example of how the complex demands of City Hall can derail a project. 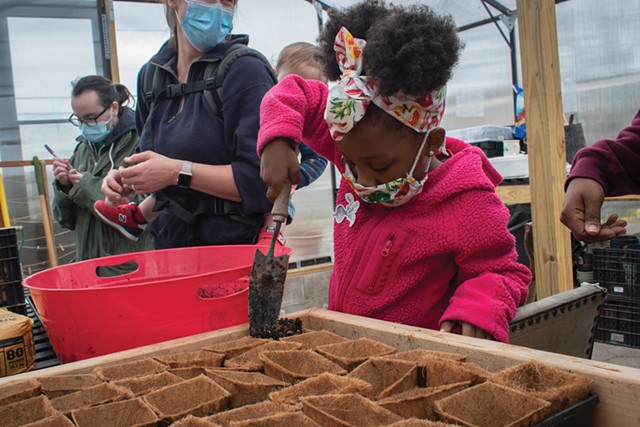 But as residents and neighborhoods have come to see the value of urban agriculture in Rochester, so have city officials. In January, Mayor Lovely Warren announced an initiative intended to address city policies and practices around urban agriculture. Among the policies to be revisited are those around permits for gardening city lots.

The initiative, RocCity HomeGrown, aims to make fresh, healthy foods more available in neighborhoods where they’re hard to come by, and to give families opportunities to either lower their food costs by growing their own or to earn income by selling what they grow.

Under the initiative, officials plan to create a database that residents can use to find city-owned parcels available for gardening or small-scale farms. Residents could qualify for low- or no-cost leases or buy the property outright. Officials are also eyeing changing the city’s zoning laws to benefit urban agriculture.

Another option under consideration is modifying current regulations to allow residents to form cooperatives and sell the produce they’ve grown in public spaces, like International Plaza on North Clinton Avenue. Officials are even talking about clearing the way for city-owned buildings to be used as indoor vertical farms.

But until the city turns talk into action, its would-be gardeners and growers have to wait.

In Smith’s case, she’s now seeking volunteers as well as donations to start her Mona Street project. She can be contacted at ourherbalstory@gmail.com.

“You would think the city would want to have use of the vacant lot to help beautify our neighborhood, to maybe impact some of the crime rates because people have things to do” Smith said. “It’s just so many benefits, but when I spoke with the city of Rochester, I was told the primary goal was for it (the Mona Street lot) to be sold. So they would take that over having a garden, which I could understand. But it hasn’t been sold in years.”

Approximately 75 miles to the west in Buffalo, urban agriculture is thriving. The Queen City has roughly 100 community and market gardens and more than a dozen urban farms and large gardens producing vegetables of all sorts, mushrooms, medicinal herbs, and flowers. One indoor vertical farm grows varied greens. Another raises plants and fish.

“I think maybe there are so many urban farmers just because I think there are a lot of people within Buffalo who love food and have a connection to food who also love to be in a city environment, too,” said Joe Kurtz, a core member of Greater Buffalo Urban Growers whose grandmother gardened in her city backyard. “I know I’m that type of way.”

One sunny, warm April morning at the Massachusetts Avenue Project, an urban farm located roughly half a mile west of Buffalo’s Elmwood strip, bees were buzzing about their hive boxes amidst a clutch of fruit trees.

“It was very tiny,” said Diane Picard, executive director of the Massachusetts Avenue Project. “We had one lot and six kids. We’ve kind of grown it from there.”

Over the years, the Massachusetts Avenue Project bought up land from the city and now sits on a T-shaped lot spanning an acre. Packed into the lot are two greenhouses, one of which is used to grow tomatoes; a pen for the farm’s brood of boisterous egg-laying hens; a soil bed for planting crops; and a brick red building fronting Massachusetts Avenue.

The building houses the organization’s offices and more. There is a grow room for starting seeds, a commercial kitchen for youth programs and food business entrepreneurs, and a store that sells things like elderberry syrup, carrots, beets, pickles, eggs, and daikon radishes, all grown or produced at the farm.

“We have a huge food apartheid problem here in the city still,” Picard said. “And even though I think Buffalo has come a long way for a city of its size, I think we still have quite a ways to go in terms of building equity and making sure people have, everyone has, access to healthy, affordable, culturally appropriate food.”

Kurtz said that much of what’s been accomplished in urban agriculture in Buffalo  has been possible due to growers collaborating to achieve common goals, whether it’s tackling a pest problem or advocating for city policies that benefit their cause. For example, a decade ago, urban ag enthusiasts successfully pressured the city to pass an ordinance allowing people to keep chickens. 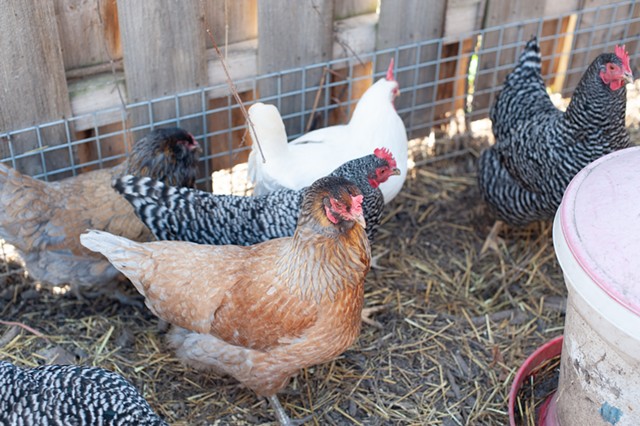 That ordinance was later codified in the city’s Green Code, which was adopted in 2017 and was an important win for Buffalo’s urban growers. It was the city’s first zoning and land-use update in six decades and designated urban gardens and farms as an allowable primary use of land in the city. The codes also stated that residents can keep bees, raise fish through aquaponics, and grow plants using hydroponics.

Unlike most urban gardeners and farmers in Rochester, those in Buffalo are allowed to sell what they grow. As a result, some of Buffalo’s farms and gardens are businesses, selling their products at restaurants, grocery stores, and community markets.

Some farms even have employees. For example, one urban farm, the Groundwork Market Garden, was recently advertising an opening for a full-time farmhand.

In Rochester, the Warren administration is evaluating modifying its zoning laws to bring the city more in step with its neighbor to the west when it comes to urban agriculture.

Kelly Miterko, the city’s director of policy, said the revisions are likely to allow gardens and urban farms to serve as a primary use of residential land and to permit people to sell what they grow on city property.

“We’re trying to work across all aspects of the city where we can move this forward and remove barriers to progress,” Miterko said

Back on the farm

Over roughly three years, the Rochester urban agriculture nonprofit Taproot Collective has turned a mostly barren lot at the intersection of Pennsylvania Avenue and First Street, kitty-corner from the Public Market, into a 4,000-square foot farm it calls First Market Farm.

Taproot formed in 2017 with the goal of helping neighborhoods cultivate gardens of their own and of teaching young people how to grow their own food. The group established First Market Farm the following year on property owned by board member and co-founder Amber Powers and her husband, Greg Shears.

“It’s another community gathering space where everyone is welcome” said Leslie Knox, chair of Taproot’s board, as she watched her daughter and some other kids in the greenhouse, planting tomato, pepper, and collard greens seeds in pots of black soil.

Taproot members have built raised beds using old street curbing; sowed the beds with vegetables, fruit, and flowers; brought in a colony of bees; and built a greenhouse to raise seedlings for First Market Farm and for other gardens in the city. There is even an irrigation system that collects rainwater and distributes it among the beds.

But Taproot is able to do those things because its property is privately owned and agriculture is not its primary use: Powers and Shear have been fixing up a house that sits on the land.

This summer, the group will launch a youth employment program. The six-week program will start in July putting 15 teenagers to work at First Market Farm, in the greenhouse and garden at School 17, and in the neighborhood at large.

Powers sees benefits in some of the urban ag-related policy changes the city is considering. But the end goal for the city, she said, should be making urban agriculture as accessible as possible to the most people.

“That's where they can have their biggest impact for the least amount of money,” Powers added. “All the programming in the world isn't going to do much if they haven't done that first."