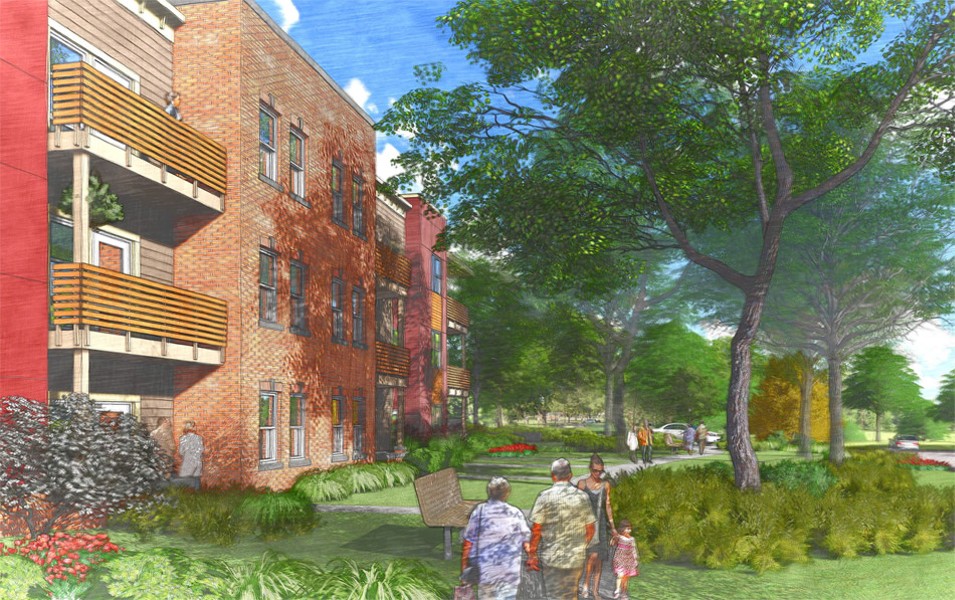 RENDERINGS PROVIDED Rochester Management presented new plans for Cobbs Hill Village apartments.
Plans to redevelop Cobbs Hill Village apartments have been among the most controversial in recent memory, generating  sharp criticism concerning the project’s design and its proximity to the park. City Council will hold a public hearing concerning the project at 6 p.m. on Wednesday, May 9,  in Council Chambers.

Mayor Lovely Warren submitted legislation to Council that would allow the project to be refinanced and move forward.  City Council is expected to vote on the matter at its Thursday, May 15 meeting. It's difficult to say how Council members are going to vote in the face of such strong opposition to the project from a wide range of neighborhood and community groups.  At a recent working meeting, Council members asked few questions about the project.

The original 60-unit complex, which consists of six one-story buildings, was built in the 1950’s as low-income housing for people age 55 and over. Rochester Management, a non-profit organization, operates the property.

The city Planning Commission approved plans last March to demolish the existing buildings and construct a six-building complex with 104 units. Rochester Management CEO Peggy Hill said the company is leaving 20 units at their current low rental rates for 40 years. Also, rents would remain the same for all of Cobbs Hill’s current tenants who move into the new buildings. But when the tenants move out, rents can be raised, with the exception of 20 units.

Some opponents want nothing built on the site and they want it to someday revert to city ownership and be returned to parkland. Others argue that the new complex will reduce the amount of low-income housing available to seniors.

But Rochester Management says that every unit in the new complex will meet state guidelines for affordable senior housing. The company has argued that the existing buildings are old, outdated, and deteriorated. At public meetings,  Hill said repairing them would be too costly. The company has made numerous concessions over the course of two years to try to address the concerns of opponents, but their demands are too diverse, she said.