November 02, 2021
The City Council is poised to lean more progressive on legislation and policy with the addition of two new members who were elected Tuesday. 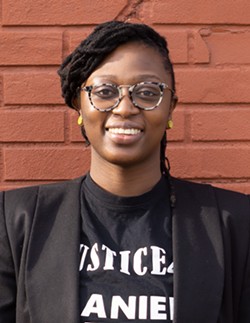 Stanley Martin and Kim Smith, running on both the Democratic and Working Families Party line, won the two seats left by Councilmembers Loretta Scott, who is retiring, and Mayor-elect Malik Evans.

The pair were part of what they called the “People’s Slate,” a coalition of Black Lives Matter activists who sought to use the momentum of their movement into the halls of power with a slogan of "From the Streets to the Seats."

Martin, outside of her election night party at UUU Gallery on State Street, was in disbelief by her win.

"I feel hopeful, I feel extremely grounded and grateful in being able to stick to our values and principles when it comes to transforming the current system and really reimagining what public safety looks like, really focusing on housing justice for all, and really centering people and their experiences in our policies," Martin said.

In all, five of the Council's nine seats were up for grabs, and the other three were retained by incumbents Mitch Gruber, Willie Lightfoot, and Miguel Meléndez.

All of the wins came as no surprise. Most of the victors faced token opposition in challengers who were either on the ballot as third-party candidates or who were Republicans facing an uphill battle in a city that leans heavily Democratic.

Each of the winners earned their seat by garnering between roughly 13 and 16 percent of the vote, according to unofficial results from the Monroe County Board of Elections with 221 of 231 election districts reporting. By contrast, none of the challengers got more than 7 percent of the vote.

The wins constitute a shift in the Council’s political makeup. Councilmember Mary Lupien has been considered the lone progressive voice in the body since her election in 2019. She supported both Martin and Smith in their bids for a seat.

Gruber, the chief program officer at Foodlink, and Lightfoot, a retired Rochester firefighter and barber, will be entering their second terms on Council.

Meléndez, the chief community engagement officer at the Ibero-American Action League, will be serving his first full-term. He was appointed last year to fill the seat left vacant by Jackie Ortiz, who stepped down to become the county’s Democratic elections commissioner.

Martin has become a dominant figure in Rochester’s social activist scene, having led many of last year’s largest protests as part of the group Free the People Roc. She works as a parole and re-entry coordinator for the advocacy organization VOCAL-NY, and previously ran an unsuccessful bid for City Council in 2019.

Martin refers to herself as a socialist and was endorsed by the local chapter of the Democratic Socialists of America. Her policy platforms included diverting funding for the Police Department toward housing, social, and mental health services, and, ultimately, abolishing the police force.

She credits her win to her vocal, and sometimes controversial, opinions.

"We ran saying exactly what our plan was, we didn't shy away from difficult conversations," Martin said. "I ran as an abolitionist and I'm very proud that we had a community that said it was time for something different and stuck by me and by my campaign."

Smith is also an advocate for VOCAL-NY and a familiar face in Rochester politics. Last year, she ran an unsuccessful campaign for the 61st District Senate seat and later attempted to fill the seat vacated by Ortiz. Prior to joining VOCAL in 2017, Smith worked for the Monroe County Health Department, most notably in HIV and AIDS initiatives.

While left-leaning, Smith is more moderate than Martin. She does not support abolishing the police, but does believe in investing more in social services.