May 29, 2020
City Council is bracing for a potential crisis when a state-imposed moratorium on evictions expires, which is set to happen in August. 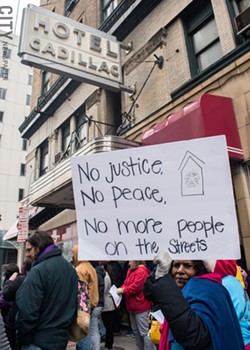 The members’ concerns became apparent during a work session Thursday, where Council was presented with a new study from the Department of Neighborhood and Business Development detailing 10 years of eviction proceedings in the city. The study showed that 73,338 evictions were filed from 2010 to 2019, and of them about 93 percent of which were due to non-payment of rent. The majority of those evictions were in cases where two months or less of rent was owed.

The latter portion of the meeting focused on what City Council could do to avoid a potential housing catastrophe when evictions are once again allowed.

“I’m really concerned about the numbers that will be piling up in the courts when the moratorium is lifted,” said Council President Loretta Scott. “If we have any options, we need to address them.”

Under an executive order issued by Governor Andrew Cuomo in response to the COVID-19 crisis, landlords cannot evict tenants for failing to pay rent. But the order doesn’t wipe away the rent tenants owe, leaving them liable for back payments once the moratorium ends and vulnerable to eviction.

Across New York, people are feeling the squeeze from COVID-19. According to a recent US Census Bureau survey, 52.6 percent of New Yorkers had experienced a loss of employment income during the shutdown, while 30.6 percent were experiencing housing insecurity.

The Rochester area had a 15 percent unemployment rate in April, according the state Department of Labor, an increase from 3.7 percent in April 2019. While the federal CARES Act has been providing an extra $600 per week in unemployment benefits to those out of work due to the pandemic, that money will dry up at the end of July.

Scott said that even if people received the $1,200 stimulus checks or received extra unemployment, there’s no guarantee they paid their rent or saved the money.

“People are going to look more and more at us, and I don’t know what options we have to address it,” Scott said.

City Council now faces the question of what, exactly, the city has the power to do to stop a potential tidal wave of evictions. Council member Mary Lupien, a longtime housing advocate, suggested a .5 to 1 percent commuter tax for people who work in the city but don’t live in the city, which could be used as an emergency fund for tenants.

“We need to look outside of the box,” Lupien said. “That’s just one thing we could do.”

Councilmember Michael Patterson stressed that if a crisis is to be avoided, only the federal government can step up to curb it.

“If we are serious about doing something, the only thing we can actually do is advocate that the federal government let loose with the money,” Patterson said. “That’s it folks, there is nothing the city of Rochester is going to do to meet the tremendous need that is going to appear. Full stop.”

Local activists, however, believe that Council can take some action to lessen the burden on renters come the end of the moratorium. Barbara Rivera, an organizer with the City-Wide Tenant Union, said the organization is working with City Council to find ways to ease the burden. She said the cooperation from Council has been split about 50-50.

“City Council has the power to tell landlords ‘hey, you have no other choice but to work with your tenants,’” Rivera said. “We’re all going through this together, we have to figure out ways to work through this.”

The COVID-19 pandemic has created a lot of uncertainty and instability for both city officials and renters. The future is foggy. But Rivera said she had a good idea of what many will experience come the end of summer if governments don’t take some sort of action.

“Some tenants don’t have the luxury of going to their family's house or picking up and moving to another place,” Rivera said. “Ultimately, a lot of our tenants are going to end up in the homeless shelters.”