Peo was joined by the Rev. Marlowe Washington, who contacted the council member after Peo’s remarks were widely circulated and made headlines and persuaded him to acknowledge his wrongdoing in a live video. 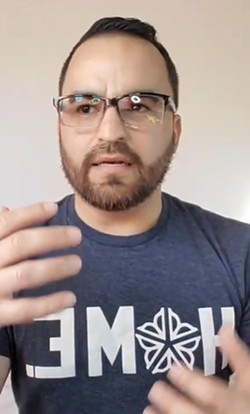 “It took me a day or two to really understand the impact of my words in a community that is so downtrodden, that is so hurt,” said Peo, a first-term council member representing the city’s northwest. “I did not speak with love and compassion. I’m sorry, I spoke condescendingly...there was just no excuse.”

Peo sparked outrage on Easter Sunday, when he shared a video of dozens of people, most of them African American, gathered on Clifford Avenue near the scene of a deadly triple shooting and dismissed racial disparities in COVID-19 infections and chastised black leaders for people of color not following physical distancing recommendations.

“Dear black leaders,” his post read. “How about you stop pushing for racial disparities in the medical field bc of black Coronavirus deaths, and focus on keeping your constituents safe at home so they don’t get it in the first place??”

His remarks were a clear shot at Mayor Lovely Warren who had pledged days earlier to encourage communities of color to practice physical distancing but chose not to have police intervene in the gathering for fear of escalating a situation wrought with high emotion.

In his video, Peo did not defend his actions and said he hoped his mistakes could foster conversation. He urged Rochesterians to contact him directly, even offering his personal cell phone number.