November 10, 2020
By a unanimous vote, the Rochester City Council on Tuesday approved Conor Dwyer Reynolds as the first executive director of the Police Accountability Board.

The vote followed several days of unease stemming from a tense confirmation hearing last week. Prior to that meeting, Reynolds had submitted a 10-page legal memo to city officials, including the city Law Department, asserting the PAB was "a wholly independent body, non-subordinate agency of the city,” including the City Council.

Several councilmembers disagreed, claiming the board is only assured independence from the Rochester Police Department. 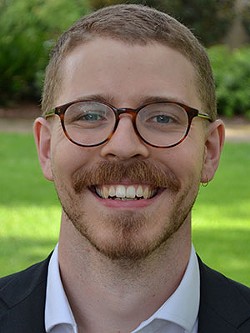 Prior to the vote on Tuesday, councilmembers expressed a desire to find common ground between the council and the PAB.

“It’s always been my hope that Council would embrace the selection of a Police Accountability Board director,” City Council President Loretta Scott said. “We know the tremendous amount of work that the PAB put into the search, work done by volunteers with no compensation, and only the hope of creating a more just city for all Rochesterians.”

In order to ensure future cooperation between the city and the PAB, City Council Vice President Willie Lightfoot suggested monthly meetings between PAB leadership and councilmembers.

“As we move the police accountability efforts forward in our community, we need to be, and continue to be, on the same page,” Lightfoot said.

Councilmember Mitch Gruber was among those who expressed concern over Reynolds’ memo. On Tuesday, he said now is the time to work through growing pains to get the PAB in motion.

“In order to make this legislation and this brand new body to work, it requires patience and building cooperative relationships, which also takes time,” Gruber said. “It’s been an honor, and I’m looking forward to moving this thing forward.”

How much authority the PAB will have remains unclear. Many of its powers, including the ability to discipline police officers, have been stripped away by the courts through litigation brought by the police union. But the city has appealed.

Reynolds, a lawyer and lecturer at Yale Law School, was unanimously approved by the PAB last month to serve as director. In a “Speak to Council” session prior to the vote, dozens of Rochester residents urged Council to approve his appointment.

Ted Forsyth, a member of the Police Accountability Board Alliance, the advocacy group which helped draft the PAB legislation, offered his support for Reynolds based on the unanimity of his approval by the board.

“This board has been, and will continue to be, a phenomenal effort in democracy,” Forsyth said.

The PAB was approved by Rochesterians in 2019 by a three-to-one vote, a number often cited by advocates to show the widespread community support for the board. But Scott said that despite that support, checks and balances are still critical, and that the board needs to work in tandem with Council.

“We all have the desire to do this the right way,” Scott said. “We all know that it’s going to take a body of continuous work to get it done. But I’m totally sure we’re all in it to win it.”