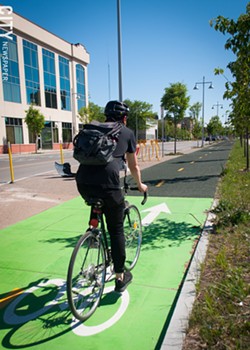 Rochester officials are in the early stages of a plan that will shape how people get around the city — and possibly how they choose to do that — for years to come.

The city is starting to put together a Comprehensive Access and Mobility Plan, which will tie into the city's broader Rochester 2034 Comprehensive Plan. CAMP, as it's being called, is all about transportation, and some parts of it will be extremely important to people who live and work in the city.

The plan will focus on five main areas: bicycling, walking, public transit, the movement of goods and emergency services, and transportation demand management. And in the course of developing the plan, city officials will pick a priority project from each category to start designing, says Erik Frisch, a transportation specialist with the city.

The bicycling section will, in some ways, be an update of the city's 2011 bicycle master plan, Frisch says. It'll emphasize the importance of creating a "low stress" bike network within Rochester. To that end, the city has built out its trails and started to develop bike boulevards, which are formalized routes along side streets that more or less parallel major roadways.

"Most potential riders are not comfortable riding on Monroe Avenue, even if there's bike lanes," Frisch says.
The plan will likely recommend continuing those efforts, but will also probably include strategies to work more protected bike lanes and cycle tracks into city projects, Frisch says.

CAMP will also likely include a pedestrian plan, which is intended to make the city a more welcoming and pleasant place to walk, Frisch says. It'll tie into Reimagine RTS – the regional transit agency's ongoing effort to overhaul its public transportation system — and will lay out ways the city can support transit use, he says. And it'll look at incentives or programs that could encourage people to use forms of transportation other than single-occupancy vehicles.

The latter falls under the category of demand management, an approach aimed at lessening congestion during peak travel periods by reducing the number of single-occupancy vehicles on the roads at those times.

The plan will also explore ways to balance commercial traffic and the needs of emergency service vehicles with growing community interest in narrower streets that better accommodate cyclists and pedestrians, Frisch says.

“We have increasing conflicts between trucks and community goals,” Frisch says.

The plan will also include an official City of Rochester street design manual, which everyone from the state, county, and city planners to private developers can reference when designing, reconfiguring, or rebuilding roadways, Frisch says.

The city has already compiled a lot of data through the comprehensive-plan process, and much of the CAMP work will be based on that information, Frisch says. The city is, however, conducting an additional survey to better inform the process. It's available at the plan's website, www.cityofrochester.gov/camp.

The city has scheduled several community meetings about the Comprehensive Access and Mobility Plan. Next up:
A committee with members from groups including Reconnect Rochester, the Rochester People’s Climate Coalition, and Common Ground Health is guiding the plan’s development. The plan should be completed by early spring 2019.

This post has been updated to match the version from the June 20 print edition.