At 8 p.m. on a Friday night in December, just a few days before Christmas, hundreds of children excitedly settled into folding velvet seats at the Auditorium Theatre to watch the touring Broadway production of "The Lion King," which runs through January 5. Every millennial in the audience, many of whom are now the parents of these children, grew up with the 1994 cartoon film from Disney. And in the past few weeks, these same folks started streaming Disney+ and can now access relics of their childhood TV and film nostalgia at any time. But does that nostalgia translate to a theatrical adaptation from 1997? Based on Friday's packed audience at the Auditorium Theatre, it seems that way.

"The Lion King" is the coming-of-age, prodigal son tale of Simba, the rightful heir to the Pride Lands throne. When a terrible tragedy takes place, young cub Simba flees his home and only finds his way back with the help of a zany group of animal friends. (The literary-fluent will detect themes from the Old Testament Bible stories of Joseph and Moses and William Shakespeare's "Hamlet" throughout.) With original songs by heavy hitters Elton John and Tim Rice and a score by Hans Zimmer, "The Lion King" was always destined to be a Broadway musical. Clocking in at just over two and a half hours (including an intermission), the adaptation does include extra scenes and musical numbers apart from the cartoon film.

"The Lion King" won six of its 11 Tony Award nominations in 1998, including Best Musical, Best Direction of a Musical, Best Costumes, and Best Choreography. Artistic director and costume designer Julie Taymor enjoyed much fanfare for her design and vision, which brought to life a musical that was different from any before it. Rochester's own Garth Fagan won a Tony for the original choreography (still performed in the touring productions). It's an earthy, stimulating show right from the start, as costumed performers — many operating large puppets and marionettes — come streaming through the aisles of the auditorium for the opening number, "Circle of Life." 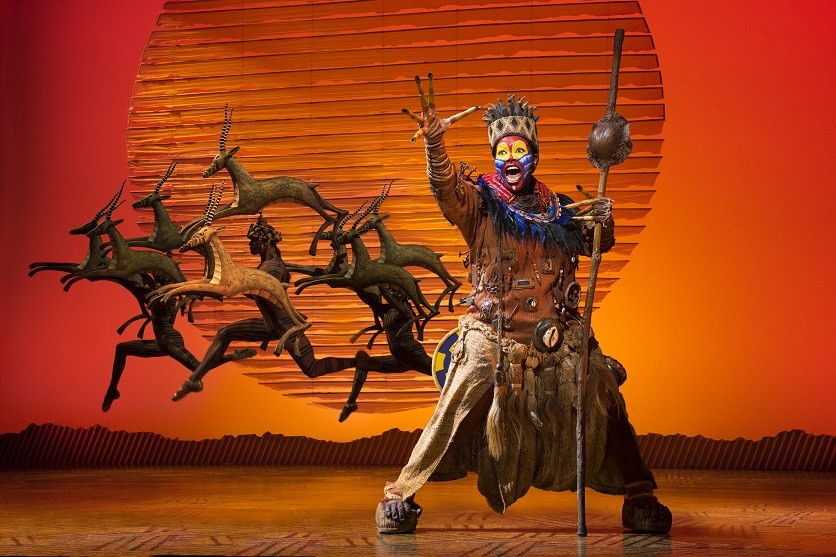 The cast is comprised of more than 60 actors, some double- and triple-cast as ensemble animals, and it's a wildly (pun intended) diverse cast overall. Audience members should take time to read cast bios, too, as many of the ensemble have listed their birthplaces; they're from all over the world. But it's the leads that really have expectations on them; after all, they're being compared to well-loved (albeit cartoon or computer-generated) characters voiced by well-known actors.

Leading the cast in the first act is Gerald Ramsey, who plays a wise, strong Mufasa with a subtle sense of humor. Ramsey's voice is incredibly moving and powerful during the show's hit "They Live in You." Rafiki (Buyi Zama) and Zazu (Jürgen Hooper) provide a wealth of comedic relief, and Hooper impressively does so while maneuvering a hollow puppet on his body. As the menacing Scar, Spencer Plachy is every bit the hateable villain, from intonation to maniacal laugh.

In the second act, Brandon A. McCall as older Simba steals the spotlight with his energy and vocals, leaving the audience wishing he was on stage longer. And of course, it wouldn't be "The Lion King" without a Long Island-esque, sassy Timon (Nick Cordileone) and unassuming, lovable Pumbaa (Ben Lipitz, who also played the role during the last Rochester tour in 2011). Together, the duo elicited most of the evening's laughs.

For all its nostalgia, age, and spectacle, "The Lion King" has the distinct potential to feel a little stale compared to less lengthy, newer, more topical Broadway shows. It might be one of those shows that will run for all time, like "Phantom of the Opera" or "Cats" — after all, "The Lion King" did surpass every other Broadway show to become the most popular musical in the world. Maybe the 2019 movie remake starring Donald Glover and Seth Rogen is winning over a new generation of Simba groupies. Or maybe it's enough that "The Lion King" is always a new experience for someone in the audience. Maybe that, coupled with a classic storyline and truly impressive production quality, is enough to keep filling seats and booking tours. Maybe that's what "The Lion King" experience is all about: the circle of life.