September 04, 2018
Rochester Police Chief Michael Ciminelli is resigning to take a job with the US Drug Enforcement Agency.  His last day as chief will be September 15 and Deputy Chief Mark Simmons will fill the post on an interim basis starting September 16.

In a press release announcing the changes, Mayor Lovely Warren says she "has strongly encouraged Deputy Chief Simmons to apply for the permanent job of Chief of Police." 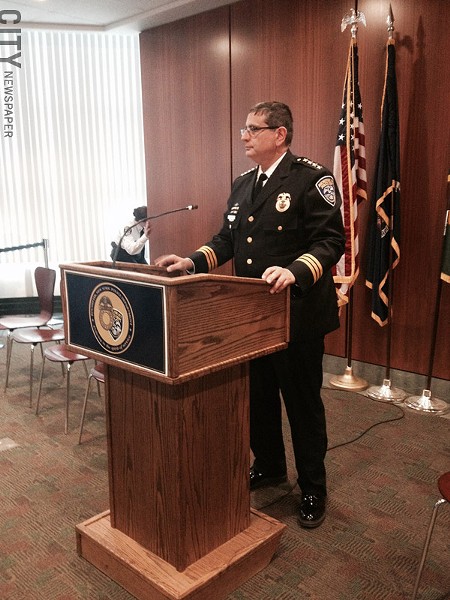 He joined the department in 2002. He's served as chief of staff to the chief of police and has had assignments to the Organized Violence Reduction Team and the Tactical Unit, says the press release. He's also a former commanding officer of the Professional Standards Section, a background that could be valuable as city officials explore changes to the city's police oversight process.

He was also coordinator for the department's reorganization project, and he's a member of the National Organization of Black Law Enforcement Executives.

“It will be my great honor and privilege to serve in Mayor Warren’s administration as interim chief of police,” Simmons said in the press release. “The opportunity to lead the men and women of the Rochester Police Department while also serving the citizens of my hometown is a dream come true.”

Ciminelli became interim chief in January 2014, at the start of Warren's first mayoral term. She appointed him police chief that March. He previously served as deputy chief of police, and in several other positions and assignments within the office. He's also worked for the DEA in the past.

“Mike Ciminelli has provided strong and steady leadership at the RPD from the start of my first term in 2014,” Warren said in the press release. “Body worn cameras; the return to a community-based policing model; new patrol sections; new section offices; greater police accountability; and a second-to-none level of professionalism will all be accomplishments that define his successful legacy as Chief of the Rochester Police Department.”