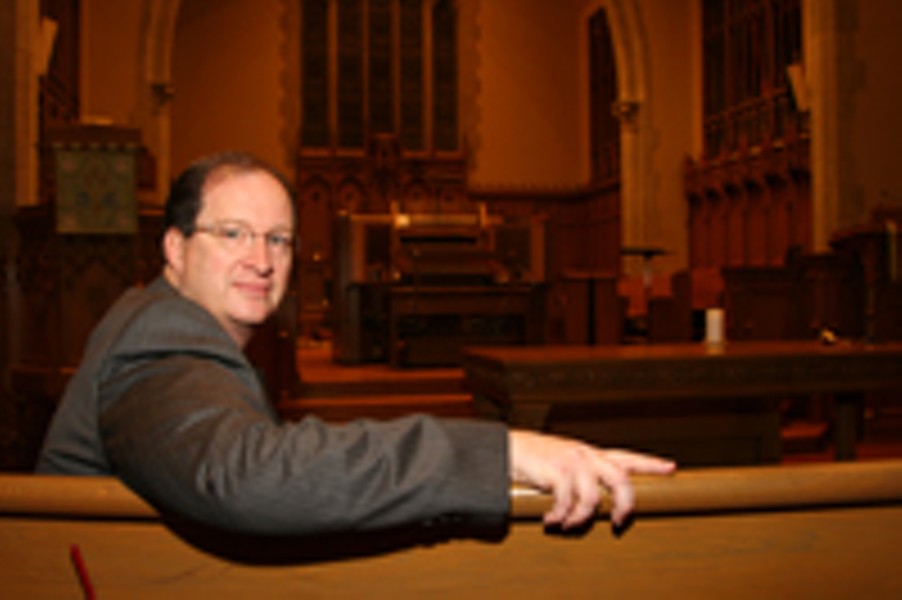 Frank De Blase The Rev. John Wilkinson of Third Presbyterian Church: "You've got people on both sides of this debate with deeply entrenched views."

Women's leadership in US religion dates back to 1776, when Ann Lee established the first Shaker congregation in the country, near Albany.

In the late 1800's, several denominations began having women serve as missionaries. But ordaining women as members of the clergy or in lay positions was often another matter entirely --- well into the 20th century.

To celebrate the 50th anniversary of women's ordination, Rochester Presbyterians are celebrating with a conference titled "Living the Call" on Saturday, September 23, at ThirdChurch.

For Alexander, the impetus was a neighbor's daughter, who had graduated from seminary but couldn't fulfill her dream of becoming a minister because of her gender. Alexander's women's-ordination resolution --- called an overture --- was approved at the national level and became Presbyterian Church law. Three years later, Presbyterians ordained their first woman minister, Margaret Towner of Syracuse.

Alexander's work represented the culmination of years of work on behalf of women in the church. And today Presbyterians and other denominations find themselves facing a similar issue: the ordination of gays and lesbians.

The Catholic Church recently adopted a policy discouraging gay men from joining the priesthood. Episcopalians are so divided on the issue of gay ordination that there is talk of a split in the denomination.

Presbyterians have been wrestling with the issue since 1978, and in 1996, they passed a law effectively prohibiting the ordination of gays and lesbians. Since then, GLBT supporters have been trying to change that law.

The Presbyterian Church functions like a representative democracy, with an organization similar to state and federal governments. Regulations are passed by a national representative body called the General Assembly, with the push for change tending to bubble up from individual churches and groups of churches.

Among the churches that have been working for change has been Rochester's Third Presbyterian, and Third's senior pastor, the Rev. John Wilkinson, says his church is a logical place to continue the debate.

"If you consider our history under the leadership of Lilian Alexander and Rochester's history with women's rights, Susan B. Anthony and civil rights," he says, "it really makes sense for us to be the ones to face this challenge."

Repeatedly, there have been efforts at General Assembly to change the national church's stand on the ordination of gays and lesbians, but they have been defeated. And Wilkinson doesn't see change coming soon.

"It's clear at the moment that there is a strong conservative majority," says Wilkinson. "But there is an interesting parallel with the women's movement. The work didn't begin with Alexander's overture. It started much earlier. And the controversy didn't end just because the law passed."

Ordination of women, despite Alexander's success, remained controversial, especially in the South. Southern Presbyterians accepted the ordination of women to the lay positions of deacons and elders, but many stopped short of endorsing women as ministers. It took years for the majority of Presbyterians to fully accept the change, says Wilkinson. And the struggle for gays and lesbians, he says, could take longer.

Among the reasons: biblical references to homosexuality, on which many supporters of the ban base their views.

"Sexual orientation as we understand it today wasn't even a consideration at that time," notes Wilkinson. But the issue is highly emotional. "You've got people on both sides of this debate with deeply entrenched views, and this could rage on for years."

The debate on gay rights inside the church, says Wilkinson, is being shaped by the broader debate in society.

"I think if you just look at attitudes about [same-sex] marriage, you can see that it will take a long time for us to come together," he says. "It comes down to the great 'Can I live with that' question, which is a personal journey."

Third Presbyterian, says Wilkinson, has many members from the GLBT community. And he thinks they attend his church because "they know we have taken a public stand, and they are welcome here."

But he admits that it has not been easy.

"There are some --- I don't want to speak for the GLBT community --- but they have said they are not going to participate because of church policy," says Wilkinson. "And that saddens me. I think the way we get through this, the way things change, is through things happening over time that can influence a clear majority. Education, spiritual shifts, and personal experiences can lead to change. But I think it is important to remember that just as it did with women's ordination, the conversation will continue. Even if a law passed allowing for ordination, there would still be years of debate."

"Living the Call: Celebrating 50 Years of Women's Ordination to Ministry," a conference focusing on the history of women as leaders of the Presbyterian Church, will be held on Saturday, September 23, from 9 a.m. to 4 p.m. (Registration begins at 8 a.m.)

Katherine Rhodes Henderson, executive vice president of the Auburn Theological Seminary, is the morning speaker. (Henderson's book "God's Troublemakers: How Women of Faith are Changing the World" will be out in October.) There will be a panel discussion in the afternoon with women sharing their ordination experiences, followed by worship.

In the evening, actress and minister Linda Loving will perform a one-woman show, "Julian of Norwich," the story of a medieval mystic. The performance begins at 7:30 p.m. and is open to the public. Admission is $10.

The registration fee for the full conference is $25, $10 for seminary students. All events are at Third Presbyterian Church, 4 Meigs Street. Lunch and refreshments are included. Information: 271-6513 or www.thirdpresbyterian.org.