Chris Collins sentencing: Go easy on him, or drop the hammer?

January 13, 2020
A family man who had a momentary lapse of judgment. A businessman who used public office to increase his personal wealth. 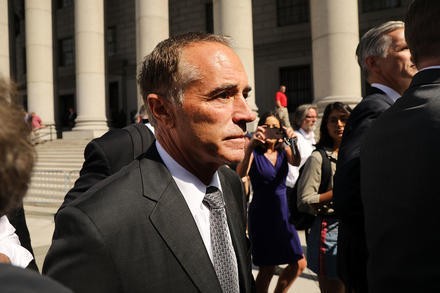 More than 100 come from family, friends and even members of Congress, asking for leniency. Another 65, mostly from Collins's former constituents in New York’s 27th Congressional District, say he should be made an example of.

All were sent to U.S. District Judge Vernon Broderick, who will sentence Collins for insider trading next week. The U.S. Probation and Pretrial Systems recommends he serve a year and a day, while sentencing guidelines in the plea deal call for a sentence closer to four years.

“There is so much that Chris could continue to do to help his community,” wrote Collins’s neighbor, Lori Luzi, “and I would think that would be a much better punishment for him and benefit for the community than putting him (in) our overcrowded jails.”

“He should be sent a message that money and power cannot buy justice,” wrote Wheatfield resident Linda Stevens.

In addition to many who consider themselves Collins’s friends, the letters of support come from approximately:

The supportive letters claim the Collins seen on video calling his son with an inside stock tip while on the White House lawn in 2017 is far from the Collins they know.

Collins was on the board of Innate Immunotherapeutics, an Australian biotech company, and had just learned Innate’s multiple sclerosis drug failed clinical trials. Collins told his son Cameron, allowing Cameron to dump his stock in the company and avoid losses.

“I suspect he must have panicked following receipt of bad news and acted to protect his son, like many imperfect human fathers would do in a similar situation,” wrote Ronald Graham, CEO of Volland Electric, which Collins owns stock in.

Several people wrote that Collins was likely so shocked by the drug’s failure he wasn’t thinking clearly.

“Given Mr. Collins’ personal wealth, I can only think that he had something akin to a 'brain explosion' upon learning of the completely unexpected clinical trial result,” wrote former Innate CEO Simon Wilkinson.

In perhaps the longest letter submitted, Collins's wife, Mary, wrote Collins is ashamed and finds it difficult to come back to Buffalo. The Collins are now residents of Florida.

“Our family has suffered terribly since the beginning of this ordeal. It has impacted all of us to an extent that is hard for others to fathom,” Mary Collins wrote. “As a mother and wife, I find myself reduced often to uncontrollable tears.”

Collins’s friends Michael and Kimberly Laurie wrote Collins “would do anything to make amends.”

“We would like to plead with you to find a way to let Chris know what he has done was wrong and the wisdom not to unduly ruin the rest of his life or his families lives over an uncharacteristic lapse of judgment,” they wrote.

A 'different person' in private

For some people, there are two Chris Collins.

“The public figure was brash, vocal, and unapologetic. He was not afraid to complain about his political opponents or throw fuel on the fire of some issue that had come up in the media,” wrote Phillip Stokes, whose nonprofit Penn Dixie Fossil Park & Nature Reserve got funding with Collins’ help. “Privately, however, Chris was a different person. He was a nice and genuine human being. He was a listener, a helper, and a problem solver.”

The supportive letters ask the judge to consider aspects of Collins’ life that they claim are overlooked. They write he saved failing manufacturing companies, participated in Boy Scouts, mentored young people, donated to charity and assisted friends with financial troubles.

One friend, Phillip Corwin, even wrote Collins is humble despite his wealth, driving a modest car, flying coach and even collecting Beanie Babies.

“He collected Beanie Babies probably with as much enthusiasm as he did running for Congress,” Corwin wrote.

Several of Collins’ former staffers express regret they didn’t do more to show the public this side. Stefan Mychajliw, who was Collins’ Erie County spokesperson before being elected comptroller, wrote it was “professionally frustrating” that Collins didn’t want to share positive, private details.

“He specifically asked me to not to share our conversations about his philanthropy, charitable works and good deeds,” he wrote. “For him, he put service over self because it was the right thing to do.”

Members of Congress weigh in

The biggest name is former Speaker of the House John Boehner, who is Collins’ neighbor in Marco Island, Florida. Boehner wrote Collins supported him as Speaker when doing so wasn’t popular.

“I continue to believe he is a good man who loves his family and his country,” he wrote.

However, Boehner stopped short of directly asking for a light sentence, writing “we have to accept the consequences that come with our mistakes and our errors of judgment.”

Tom Reed, who represents New York’s 23rd Congressional District in the Southern Tier, also stopped short of directly asking for leniency. However, he did praise Collins’s work in Congress.

“In the end, I leave it to your judgment on what sentence is to be imposed in this matter, but simply as a human being and as a colleague I thought it was appropriate to share these thoughts with you,” Reed wrote to the judge.

Collins also received support from another Congressman who resigned in disgrace. Tim Murphy of Pennsylvania, an outspoken abortion opponent who allegedly asked his mistress to have an abortion, wrote he’s a “better person and leader having known Mr. Collins.”

Using power to 'misrepresent and swindle'

It may be telling that many who wrote asking for a harsh sentence are the people Collins once represented.

Many of the letters, which can be here, criticize Collins for not communicating with constituents, being swayed by donors and feuding with late Congresswoman Louise Slaughter. Some also say he used public office to serve his own financial self-interests.

“He has used his political power to misrepresent and swindle,” wrote Hal Bauer.

They also note Collins misled the public by maintaining innocence during his 2018 campaign. Collins pleaded guilty and resigned less than a year after winning re-election.

Nate McMurray, the Democrat who lost to Collins in the election by about 1,000 votes, wrote Collins should have to repay his salary from the time of his indictment and forfeit his pension.

In stark contrast to Collins’s friends and family, many members of the public say Collins’ status should result in an ever harsher sentence, not a lighter one.

“In his role as an elected official, Mr. Collins was involved in enacting the laws of this country. As such, I believe he should be held to an even higher standard than the average person,” wrote Sharon Kelly.

William Fine wrote that sentencing to Collins to anything less than the maximum sentence, “will signal to people of privilege that crimes pay.”

Sentencing is scheduled for Jan. 17.

This article was originally published by WBFO-FM 88.7 and republished by CITY with permission.