Avvino, Taste of the Town, and more

"It's the unpretentious transmission of genuine excitement that's crucial."

Janine Wasley has worked in the restaurant industry since she was 14, and when she came across the above sentence some years ago in a wine magazine, it made an indelible impression. Those words now serve as a daily reminder of her approach to service at Wasley's stylish Brighton restaurant, Avvino, where she and chef Brian Antinore serve up what Wasley describes as "American cuisine with French and Italian influences, using as many local ingredients as possible." It's continental comfort food with an upscale twist, presented in surroundings that have been meticulously designed by a woman who understands hospitality. 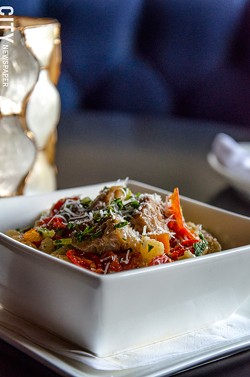 If you've done any fine dining in Rochester recently, you've no doubt encountered Wasley, a longtime fixture in the Max restaurant line and most recently a part of Tournedos Steakhouse at the Inn on Broadway. "I decided I'm going to be doing it for the rest of my life," Wasley says of her decision to open Avvino, a space which shows no evidence of its former incarnation as a day spa thanks to its elegant warm woods, cozy blue banquette seating, one unbelievably flattering mirror, and a tricked-out kitchen that would make both professional and home cooks seethe with envy.

That big kitchen ain't just for show, either. Chef Antinore — he says he's cooked "every place you can think of," but most notably the Rio Bamba — and his staff are busy making everything from the plump Parker House rolls that begin your meal, to the focaccia hugging your burger, to the gelato that you probably won't have room for (but, really, who could say no?). Avvino's menu includes raw bar selections; carefully composed salads like a summery blend of heirloom tomatoes, watermelon, arugula, and white balsamic vinaigrette ($10); housemade pastas like the delicious ricotta cavatelli with chunks of veal osso bucco, green olives, and bright preserved lemon ($12/$25); and entrées like the juicy pancetta-wrapped pork tenderloin served with polenta, wilted spinach, and balsamic-glazed peaches ($24). 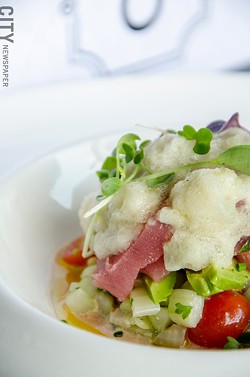 A certified sommelier, Wasley named her restaurant after the Italian word "avvinare," which involves the practice of priming glassware with a splash of the wine to be enjoyed. So it should come as no shock that the extensive wine list is both carefully curated and globally sourced, with quite a few options available by the glass. (Plans for multi-course wine dinners and focus menus are afoot.) There are craft cocktails, too, ranging from originals such as the charmingly named Janine's Juice, with grapefruit vodka, strawberries, St. Germain, and fresh lemon ($10), to a classic Pimm's Cup, a refreshing libation which nicely embodies Wasley's vision for Avvino: "Timeless, not trendy. Years from now we'll still be here."

Greece is the word

Listen up, gastronomes! The Greece Chamber of Commerce's Taste of the Town goes down Sunday, August 25, 3-6 p.m. at the Greece Town Hall, 3 Vince Tofany Blvd. Participating tasters can sample the wares of more than 20 vendors, including Lamplighter Restaurant and Etna Pastry Shoppe, with passports running $25 in advance, $35 at the door. (The website helpfully suggests that multiple people share one passport in light of all the food.) Get the latest in ticket and vendor information at 227-7272, or visit greecechamber.org.

A couple of four-course pairing dinners that ought to be on the radar of beer aficionados: The Old Toad (277 Alexander St., 232-2626, theoldtoad.com) teams up with Bear Republic Brewing Co. for its Wednesday, August 21, event; while Johnny's Irish Pub (1382 Culver Road, 224-0990, johnnysirishpub.com) and Anderson Valley Brewing conspire to feed and water you on Thursday, August 29. Get the particulars at their respective sites.

At some point in the last few months you've likely heard about the Cronut, the Manhattan-born hybrid of a croissant and a doughnut. Interested parties might like to know that State Street Bakery (165 State St., 319-4887) is selling its version of the pastry, while Colie's Café (various eastside locations; coliescafe.com) has the comparable Wolf Bite. Are there others? And are they any good? Let us know by emailing food@rochester-citynews.com. 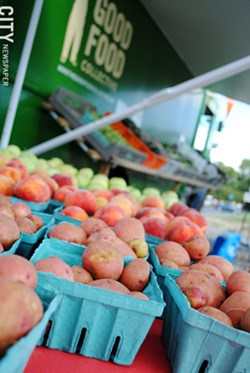 Well, fall's on its way, and you certainly can't sit around eating deep-fried dough until the asparagus is ready. Perhaps a fall or winter CSA is in your future. Among those available are from Good Food Collective, with weekly (biweekly in winter) distributions of locally grown fruits and vegetables beginning at $225 per season. Visit thegoodfoodcollective.com to learn more.

Tala Vera Cantina, a Mexican restaurant that moonlighted as a live-music venue, has shut its doors after nearly three years in business at 155 State Street.

Camarella's, the salad-and-sandwich spot that opened this past January in the Sagamore on East complex at 130 East Avenue, has closed.

Times Square Café, which replaced the Orange Glory outpost a couple months ago at 45 Exchange Street, is now closed.