Food-scene watchers are no doubt aware that the stateside ramen era has been in full effect for the last several years. While we noodle-loving Rochesterians knew of a couple places where we could score piping-hot bowls of the Japanese comfort food, many of us held out hope for a ramen shop of our very own. Our silent prayers (and a few loud ones) have been answered in the form of a cozy new spot called Furoshiki, now open in the one-time Piranha space at the northeast corner of Park and Berkeley. For weeks the posters in Furoshiki's windows promised a "Ramen Revolution," and the first shot has finally been fired. 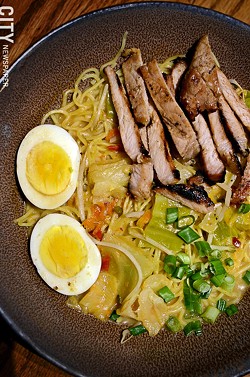 If your only experience with ramen has been as part of the dorm diet, then forget about those wavy bricks of deep-fried starch and their ultra-salty mix-ins. The ramen ($9-$10) served by Chef Tom O'Brien at Furoshiki consists of toothsome noodles, savory broths, and enough customizable add-ons to ensure that this traditional soup makes for a satisfying meal. There are many variations on ramen in Japan, and Furoshiki offers a couple of the more well-known versions, like pork-bone and miso, as well as chicken, veggie, and kimchi ramen. Each hits the table with dedicated toppings, such as corn, greens, and a soft-boiled egg, though there are a few ways to tweak the ramen to your specifications.

Furoshiki, which is owned by Plum House proprietor Mark Teng, also serves up small plates like pork dumplings ($4), lettuce wraps ($5), and several kinds of skewered-and-grilled yakitori ($4-$5), as well as nicely composed salads and hearty sandwiches, with vegetarian choices at every turn. Furoshiki currently offers an array of beer and wine, and sake fans will definitely want to begin working their way through what Furoshiki claims is the widest selection in Rochester.

Meanwhile, on the southwest corner of Park and Berkeley, diners are learning how to unhinge their jaws in order to chow down on a towering burger at Blu Wolf Bistro. The space nearly unrecognizable from its former incarnation as Colie's Café thanks to warm woods and moody lighting, Blu Wolf bills itself as a "neighborhood gastropub" and backs up that claim with a menu that splits the difference between bar food and fine dining.

Blu Wolf showcases a tempting range of starters, salads, and entrées, but the inventive assortment of half-pound burgers might be the main attraction here. Constructions include the Irish Nacho Burger ($15) and the Bloody Mary Burger ($12), as well as the signature Blu Wolf Burger ($35), which isn't so much a meal as it is a challenge: two pounds of beef, meat hot sauce, cheddar, lettuce, tomato, onion, a mac-and-cheese patty, and bacon, served with a pound of Blu Wolf's beer-battered Bent Arm Fries and a milkshake. Conquer it in 30 minutes and Blu Wolf donates a portion of the price to a local charity. We'll remember you fondly...

Battledish: Rochester is exactly what it sounds like: a throwdown amongst local chefs for delicious bragging rights. Attendees at this Dishcrawl event, happening Saturday, February 8, 2-6 p.m., will wander Park Avenue sampling the creations of six chefs — such as Café Cibon's Ashley Swan and Roam Café's Tim Doane — then vote on their favorite dishes and cocktails. Tickets range from $15 to $125; visit dishcrawl.com/rochester for all the details.

If this year is the one in which you commit to becoming a more versatile cook, know that Rochester has no shortage of chef-taught classes. The instructor line-up at Rosario Pino's (rosariopinos.com) includes 2Vine's Gino Ruggiero on February 18 and Good Luck's Tim Caschette on March 3, while Rochester Culinary at Vella (rochesterculinary.com) features seminars by the likes of Hedonist Artisan Chocolates' Nathaniel Mich on January 27 and The Owl House's Brian Van Etten on March 24.

The Buffalo-based Papaya Asian Kitchen & Bar recently opened a Rochester outpost in Marketplace Mall. The menu might be best described as Asian fusion, which basically means that it's all fair game: mostly Thai and Japanese dishes, but obvious Korean, Vietnamese, and Chinese influences as well. To learn more call 272-7425 or visit papayarochester.com.

Brunello Wine Bar is now open at 663 N. Winton Road, offering globally sourced reds, whites, and sparklers by both the glass and bottle, along with a full bar and light fare via delivery from Merchants Pasta House. Get details at 441-9571, or visit brunellowinebar.com.

The newest restaurant concept located in the 1 Ryan Alley space is casual fine dining at The Grill at One, which serves salads, small plates, pizzas, and entrées, along with a roster of burgers. Call 546-1010, or do some advance work at oneryan.com.

The Brooks Landing branch of California Rollin' has closed.

State Street Bakery and Eatery is now closed at 165 State Street, though there are reportedly plans to reopen somewhere downtown in the coming weeks.