Omakase at Next Door Bar & Grill

Next Door by Wegmans, 3220 Monroe Avenue

Full disclosure: I have never been an adventurous sushi eater. I am that person that sheepishly orders the California Roll while my dinner companion is ordering the roll with four different types of fish and topped with colorful roe. When I learned that Next Door Bar and Grill had started to offer Omakase (translated from Japanese: "I will leave it to you," i.e. the chef chooses the courses) on Thursday nights, I decided to go leaps and bounds outside of my comfort zone and try it. I brought along my boyfriend, Cody, for emotional support and because he is a more adventurous sushi eater than I, and could offer a more balanced perspective if needed.

In charge of our fate for the night was Chef Loi, who introduced himself to us as soon as we sat down at the sushi bar. We were offered a sake pairing which we both took advantage of, and which provided me with the liquid courage I needed. Seating is limited for the Omakase and we had a group of about 12 people sharing the experience with us. The first bite we had was an amuse bouche in the form of a Tempura Shishito Pepper stuffed with shrimp. The pepper was lightly fried in a tempura batter and topped with a delicate sprinkle of flaky salt. Not too spicy, it was balanced well with the flavor of the shrimp nestled inside. 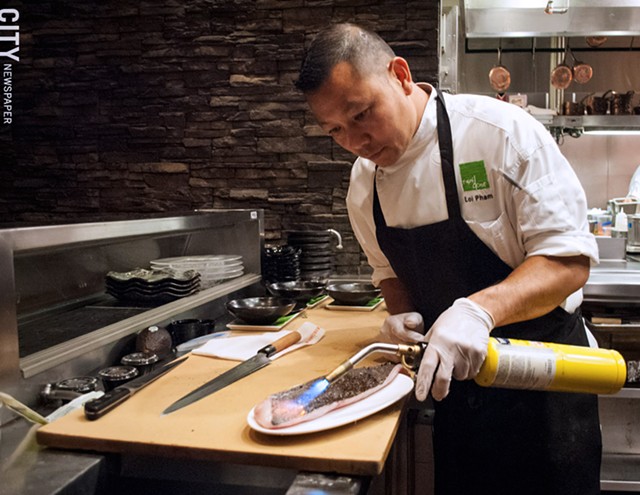 The first course was a Kabocha Tofu with Sunomono salad. Kabocha is a Japanese variety of winter squash and here was made into a tofu that was a like a silky, sweet custard. It was topped with a small piece of raspberry, a dollop of wasabi, and surrounded by a dashi-based broth that created the perfect sweet-salty bite. Sunomono salad is a Japanese dish typically made with cucumber that has been marinated in rice vinegar. On top of the salad was a slice of smoked salmon and fluke, as well as egg yolk. I'm typically not a fan of salmon, raw or cooked, but the smokiness of the salmon really worked well with the sweetness of the rice vinegar. I was leaving my comfort zone and I was okay with it.

Our second course was a cold somen noodle dish that included mushrooms, ginger-marinated tomatoes, shrimp, and the thin, wheat-based noodles. The dish was topped with what appeared to be Rice Krispies, and were in fact fried Rice Krispies, which magically kept their crunch and provided a fun texture for this dish. The third course (my companion's and my favorite) was a piece of stuffed steamed snapper with a truffle dashi sauce. The fish was stuffed with an egg omelet, and had it been appropriate to pick up my plate and lick the remaining sauce off it, I would have.

Chef Loi started us off easy with bites of Chutoro tuna, Kampachi, Fluke, and Snapper, which were all delicious. And then I saw it. He pulled small pieces of the Uni out of a package designed to keep it fresh, and placed the Uni in a piece of Nori (seaweed used to wrap sushi) like a little, terrifying, taco. I took a deep breath and took a bite and I did not die. I did not want to spit it out, either. Fresh Uni tastes like the ocean, it's briny and creamy. I was very proud of myself. 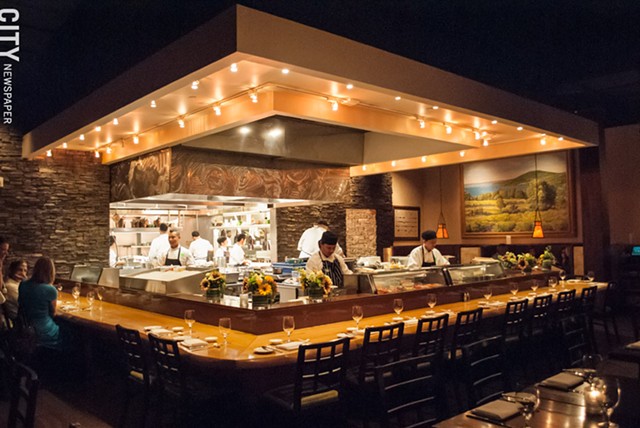 Our night finished with a small bowl of miso soup, which was light and warming and the perfect topper to my belly full of sushi. For $45 per person (plus gratuity), Omakase at Next Door is something you must experience. Omakase elsehwere could run you more than $100, but the owners of Next Door want people to be able to enjoy it at an affordable price.