Marshall Street Bar and Grill is not new. They opened officially on October 1, 2010, in the space formerly occupied by Damian's Pub on the corner of Monroe Avenue and Marshall Street. Over the last year, however, a certain buzz has grown around them. In recent conversations I have had regarding Rochester food, many have voiced that Marshall Street is the destination for the best bar food in town.

Owner Don Bush is a familiar face on Monroe Avenue. Bush worked at Acme Bar and Pizza for 10 years before venturing out on his own. Choosing the location wasn't an easy decision — Bush and his wife Kelly looked at other neighborhoods in Rochester before deciding on the Marshall and Monroe location. "I've lived on Monroe Avenue since I was 16," Bush says. "I wanted to give people a reason to come down to this end of Monroe Avenue and then have it become a destination for them."

To his advantage, Bush's experience in the restaurant and bar business informed what he would and wouldn't want for his own place. "I wanted a place where people felt comfortable, a real neighborhood bar and grill where my customers feel at home."

And the space really makes you feel comfortable; from the Christmas tree that is up year round — and seasonally decorated — to the wall of board games. The televisions even have at least one educational program playing on one of the screens at all times ("That's for me," Bush says). 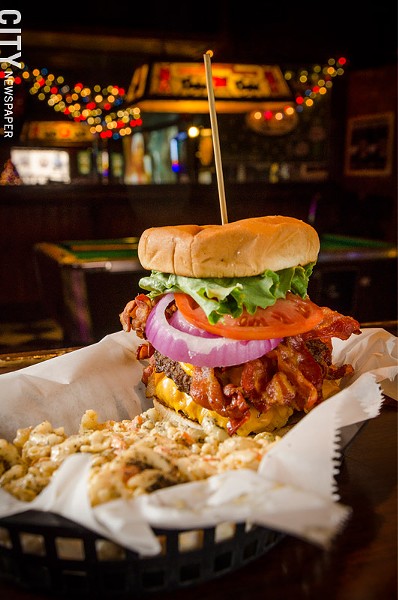 Marshall Street's menu is bar food on amphetamines. You won't want to order just a burger — although you can — you'll want a Double Bacon Chicken Cheeseburger ($8), a cheeseburger with "bacon, chicken fingers, and more bacon." You won't get a typical version of a garbage plate, you'll find the volcano plate, of which there are three different varieties. Pay attention to The Kilauea ($16.50), which includes your choice of two meats plus chicken fingers, Marshall Street's homemade Sloppy Joe mix, and the standard fries, mac salad, cheese, and hot sauce.

Vegetarians need not fear the meat-heavy menu. There are Vegetarian Battered Hot Dog Bites ($5.75), a Veggie Burger ($6.50), and even a meatless version of a Sloppy Joe ($5.50) available. My vegetarian friends started to salivate over the Irish Nachos ($5.50) which consist of waffle fries, Marshall Street's own jalapeño queso, onion, tomatoes, and jalapeños.

Bush has a philosophy that he models his business after. "If you try to be something that you're not, you're not going to succeed. Have a vision, and don't waver from that," he says.

Zeppa Bistro (315 Gregory Street) will hold a wine pairing dinner with courses featuring fresh ingredients from Hilton's Bolton Farms on Tuesday, June 24, at 7 p.m. The dinner is $70 per person. Call 563-6421 to make a reservation.

Tavern 58 at Gibbs (58 University Avenue) will host a Brazilian Themed Pig Roast Pairing Feast in celebration of the World Cup on Thursday, June 19, at 6:30 p.m. Reservations are $40 per person and can be made by calling 546-5800.

The Downtown Batavia Public Market has a new location in the Bank Street and Alva Place parking lot. The market is open every Thursday, 9 a.m. to 3:30 p.m., June 19 through September 25.