The story behind the new restaurant Mamma Lucia reads like a romantic-comedy script. Boy meets girl in high school, date, but eventually break up and lose touch. They reconnect 20 years later, get married, and open a restaurant together. This is the story of Senada and Orhan Pehlivanovic and Mamma Lucia, which opened in the Renaissance Apartments building (2500 East Avenue in Brighton) in January.

The Pehlivanovics are both from Bosnia. Orhan owns a restaurant, also called Mamma Lucia, in Germany and has wanted to open a restaurant in Rochester since moving here three years ago. The couple became friendly with the owners of the Flour City Grill, which formerly occupied the space, and when Flour City decided to leave, Mamma Lucia in Rochester was born. 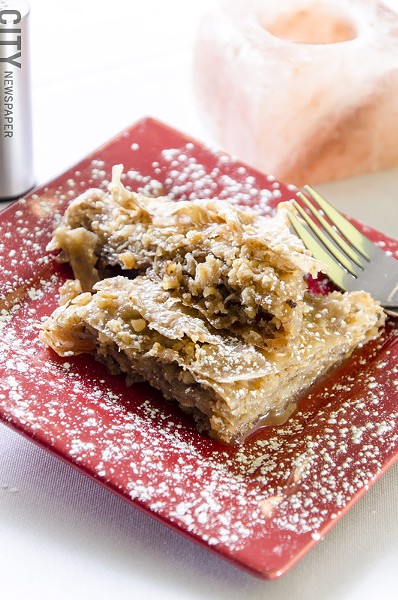 The menu contains a mixture of traditional Bosnian, German, and Italian fare. One of the Bosnian dishes, cevapi ($10) (pronounced cha-VA-pee) consists of links of ground beef that have been marinated in spices for 24 hours, sandwiched between homemade bread called lepina, a buttery flatbread, served with homemade sour cream (kajmak) and onions on the side. The Bosnian influence also comes into play on the Mamma Lucia Meat Plate ($14), a plate full of cevapi, chicken breast, and veal, served with lepina, sour cream, and fries. "Everything is authentic and homemade," says Senada.

And the recipes, she says, "are from moms and aunts."

Orhan learned how to cook Italian food when he took over ownership of Mamma Lucia in Germany. The menu has standard Italian fare like chicken parmigiana ($12) and linguine alla Bolognese ($11). A traditional German dish on the menu, frikadelle ($12), consists of two meatballs stuffed with feta cheese and mushrooms and served over pasta with marinara sauce.

Specials will rotate daily at Mamma Lucia, and depending on the day of week, your meal's soundtrack could be someone playing the piano or strumming a guitar.

Mamma Lucia is located at 2500 East Avenue in the Renaissance building on the corner of East Avenue and Penfield Road, and is open Tuesday through Thursday for dinner only, Friday and Saturday for lunch and dinner and Sunday for brunch. Visit mammaluciabrightonny.us for hours of operation. 586-7730. 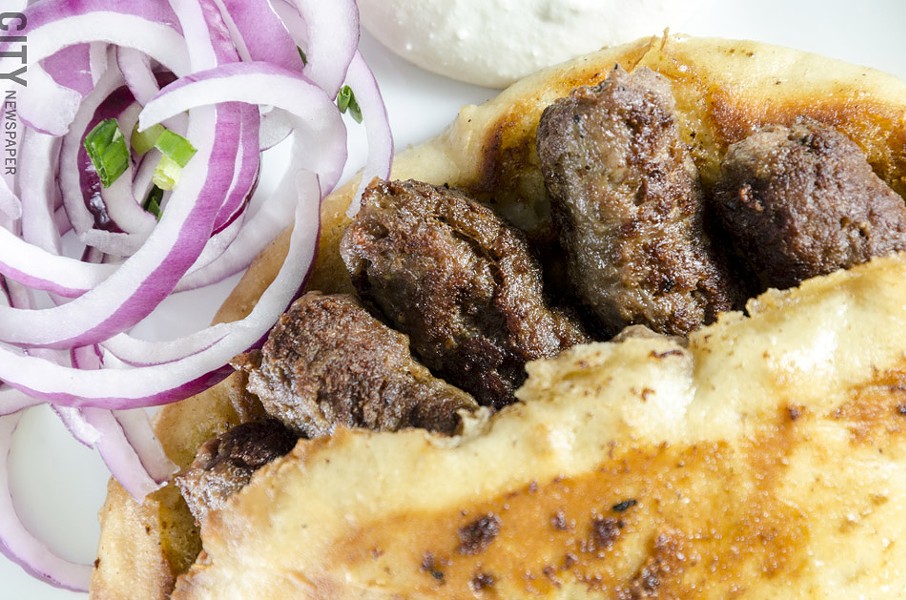 Good Luck restaurant and Writers & Books are collaborating for the "Last Meal on Earth" taking place February 28 at 7 p.m. at Good Luck. The concept for the event is based on this year's selection for Writers and Book's "If All of Rochester Reads the Same Book," Karen Thompson Walker's "The Age of Miracles," which addresses the extinction of humankind. Chef Don Martello will create his four-course concept of a last meal on earth. Tickets for the event are $65 and must be reserved prior to February 21. For reservations call Writers & Books at 585-473-2590, ext. 107.

ButaPub (315 Gregory Street) will host a Brine & Swine Dinner on February 18 at 7 p.m. Tickets are $65 and include a five-course tasting menu paired with beers selected by Jason Ellsworth of TJ Sheehan. The pièce de résistance will be a special preparation of pork belly and octopus paired with Lindeman's Framboise. Call 563-6241 to make a reservation.

Grand Cru Chocolates and Nuts is now open at 3050 Monroe Avenue in Pittsford. The owners purchased The Nut House and decided to move the location and expand the selection to include imported high-end chocolates in addition to their selection of roasted nuts and other specialty items. More information can be found at grandcruchocolates.com.

Pizza Stop has outgrown its current location and will be moving to 131 State Street and doubling in size. Owner Jim Staffieri hopes to reopen on February 13 and plans to offer wine and beer. Find updates at pizzastop1.com.

Both Next Door by Wegmans and Amore Italian Restaurant & Wine Bar are offering Valentine's Day dinners designed to take the stress out of impressing your sweetheart (or maybe just yourself). Next Door will offer three courses plus a dessert option for $59 per person. Amore will offer two courses plus dessert option for $29 per person. Reservations required.

Adding another entry to the rapidly expanding list of new breweries opening in Rochester, Knucklehead Craft Brewing has opened at 426 Ridge Road in Webster.

Tica's With a Twist (280 Exchange Boulevard) has closed.