Put that pinky down when you're sipping from your wine glass, Rochester. Aldaskeller Wine Co. is hosting a new pop-up series at Swan Dive, making wine both more approachable and the life of the party again.

The series' wine curator Brandon Opalich has been working in the service industry for nearly 20 years in New York and various other states. He has worked at the New York Wine and Culinary Center and he has farmed his own produce on his own land. Now, Opalich wants to introduce wine lovers to an inclusive, laid-back vibe. Along with Nick Ryan (collaborator and co-owner of Swan Dive), Dan George (wine distributor of the first pop-up that was held in July), Opalich and Tim Benedict (who pairs the wine selections with light fare) are nuancing the traditional wine experience.

"Wine is so bougie -- and that's ok too, but it doesn't have to be," Opalich told CITY at the July pop-up. 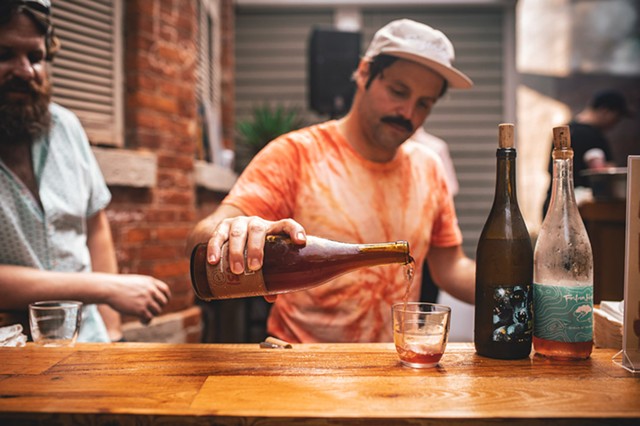 The first event featured four West Coast natural wines, paired with $1 oysters and pork skewers (good on Benedict, who gave diners the option of adding an extra zip to the skewers with a spicy rub or a marinade of coconut chili sauce). The pop-ups feature tastings of five wines (two-ounce pours) for $12. Customers can also purchase a single glass of wine or buy a bottle of their favorite.

The wines aren't just paired with food; Opalich also serves up music and nostalgia. During the first pop-up on Swan Dive's patio, the Aldaskeller team spun West Coast vinyl (from Anderson Paak to Snoop Dogg and Randy Newman) to get people dancing, laughing, and mingling.

But just because they're making fun events doesn't mean Opalich isn't a walking encyclopedia on the realm of wine. He's loquacious and enthusiastic, and he will tell you as much as you want to know. When asked what makes a wine "natural," he responded that a natural wine is made with grapes that are organically grown and biodynamically farmed, meaning there are no pesticides or herbicides used on the vineyard.

"The wines I showcased at the first pop-up, they're low production, and they're sustainable," he says. "They're dry-farmed -- no irrigation systems are used. When the wine is being made, they're using ambient yeast; the farmers don't buy the yeast, they're naturally inoculated."

Opalich refers to them as "renegade winemakers," referencing the alternative ethos as something similar to that of the DIY punk scene: conscionable and anti-establishment.

"I want to make it fun, approachable, and not an intimidating thing for people," he says. His selection process involves choosing a grape that he likes and finding winemakers who ferment it through a natural process.

"Aldaskeller" is the combination between Opalich's great-aunt's name (Alda) and the German word for "cellar" (skeller). The name points to the feeling he had as a child, visiting his grandmother's wine cellar and watching the adults drink wine with slices of messy pizza, the sauce and cheese melting off the crust. Wine at grandma's house is, for Opalich, the sensory symphony of life best lived: musty cellar smells, grandma's food, and family laughing (or even fighting) at the kitchen table.

In so many words, Opalich says he wants to add as many chairs as possible to this proverbial table and make it as inclusive as possible. The August 21 pop-up will feature Creole food and French wines from the Alsace and Loire Valley regions. 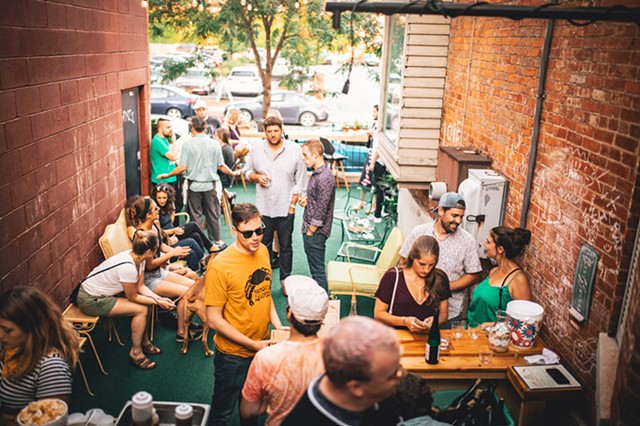